Sutton begin a big weekend of Easter action on Good Friday with a first ever visit to Mansfield's One Call Stadium. U's will be wearing green for the game.

The two Easter games are the only two of Sutton's remaining fixtures to be against sides also involved in the promotion race, with Newport the visitors to the VBS on Monday, and will go a long way to determining whether U's might be involved in the end of season play-offs, and tomorrow's game will see an attempt to end Mansfield's remarkable run of home form which has seen them win their last eleven Sky Bet League Two games at the One Call Stadium.

That run began in November, just before Mansfield made the visit to Sutton and were comfortably beaten 2-0 thanks to goals from Louis John and Omar Bugiel, the latter a November EFL League Two Goal of the Month contender. It was a result that looked better as the weeks went by as The Stags won their next eight league games to move in to the higher reaches of the table, and last week's 4-0 win at Scunthorpe lifted them to fourth place, handily placed with four of their last six games at home and a far cry from the middle of October when they were only outside the relegation zone on goal difference.

Striker Rhys Oates, who has a good record against Sutton, missed the game in November and has again been absent recently while George Lapslie is suspended.

Sutton bounced back from the Wembley disappointment with a battling win against Leyton Orient last Saturday, and are five points and seven places behind Mansfield. A behind closed doors friendly against Havant on Monday gave U's the chance to give game time to those not involved recently, Adam Lovatt scoring the only goal of the game, and with Ben Goodliffe and Will Randall having trained this week after missing the Orient game through injury, U's could have a full squad to choose from, with Ali Smith, who returned last week as a substitute, returning to his former club.

For anyone not going to the game it will be live streamed through our iFollow service. Match passes cost £10 and can be bought here.

Travel details are as follows: The Supporters' coach leaves at 8.30am.

Travelling by car:   Leave the M1 at junction 28, then take the A38 towards Mansfield. After around six miles turn right into Belvedere Street (at crossroads), then after a quarter of a mile, turn right into Quarry Lane for One Call Stadium. Matchday car parking is not available, but there are nearby pay and display car parks at  Grove Street, Victoria Street, Garden Road and Church Lane, all with easy access to the ground.

By rail: Leave St Pancras hourly at 35 minutes past the hour, changing at Nottingham in all cases. Total journey time is just under two and a half hours. You can see the ground from the station,  Leave the station via the footbridge, adjacent to Platform 2. Walk past Burger King, through the retail park, and you will arrive at the North Stand (away end). It should take no longer than five minutes on foot. Return at 17.11, 17.41, 18.11, 18.44 or 19.13, again changing at Nottingham in all cases.

Sutton confirmed the lack of any Wembley hangover with arguably the best result of a league season in which there have been quite a few candidates, ending Mansfield's run of eleven consecutive home wins and launching U's back in to the play-off zone.

The result lifted Sutton back in to the top seven at the expense of Newport, Monday's visitors to the VBS Community Stadium, and while it is still extremely tight, with five points separating Northampton in 4th and Salford in 11th, if Sutton maintain this level of performance for the remaining five games then there is every reason to think that the season may be extended and a return to Wembley could remain a possibility.

Ahead early on after Omar Bugiel's opportunist goal, and with David Ajiboye adding a second just after half time, U's always had themselves in front, and responded to Ben Goodliffe's own goal with twelve minutes to go with a superb strike from substitute Richie Bennett before Mansfield could take advantage, Matty Longstaff's deflected shot deep in to injury time giving the scoreline a closer look than U's deserved.

Goodliffe was fit to return to the back four in the only change from the side that beat Orient, while Mansfield were still missing striker Rhys Oates and the suspended George Lapslie, but their home form over the last five months has been the best in the EFL and for U's to strike early was a huge boost. The blow was partially self inflicted as Farrand Rawson dallied on the ball after receiving it from goalkeeper Nathan Bishop, but Bugiel's pressure was as much responsible for the error and the striker dispossessed Rawson, swerved round Bishop and rolled the ball in to the empty net.

For much of the first half U's were in control, and Enzio Boldewijn raced down the left but then shot straight at Bishop when better options might have been available. Mansfield went to the other end, and after a patient build-up Jordan Bowery's low cross found Oliver Hawkins sliding in at the far post but unable to get his shot on target. That was the home side's only serious threat, though, and if they were hoping to put U's under more pressure in the second half they were rocked within four minutes as Rob Milsom came forward on the left to collect Harry Beautyman's pass and laid the ball wide to Boldewijn, who turned Elliott Hewitt inside out before chipping a cross to the far post where Ajiboye arrived to volley home.

Mansfield did exert more pressure as the half went on, Dean Bouzanis making one fine close range save from Lucas Akins after a goalmouth scramble, and U's surviving a penalty claim when Stephen Quinn went over under Isaac Olaofe's challenge, referee Neil Hair booking the Mansfield player for a dive when other officials might easily have taken the opposing view. There was also a superb block by Milsom to divert a shot from substitute Danny Johnson, who also saw a deflected shot saved by Bouzanis.

U's seemed to be on course for a comfortable win until, with twelve minutes to go Hawkins headed on a long free kick from Bishop and Goodliffe, stretching to try and prevent the ball reaching Bowery, looped a header over Bouzanis and in to his own net. It threatened to set up a grandstand finish, but within two minutes Ajiboye's superb crossfield pass sent Bennett away on the left, and with Mansfield hoping for an offside flag that never came, Bennett went on to drill a shot across Bishop and in to the far corner.

There was still pressure to survive for U's but they rarely looked like giving up the points and although, with stoppage time almost completed another long free kick fell to Longstaff, whose shot deflected past Bouzanis off the luckless Goodliffe, it was too little too late for the home side as U's celebrated another superb victory. 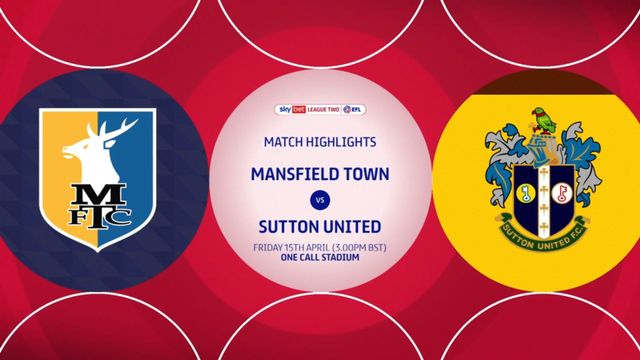 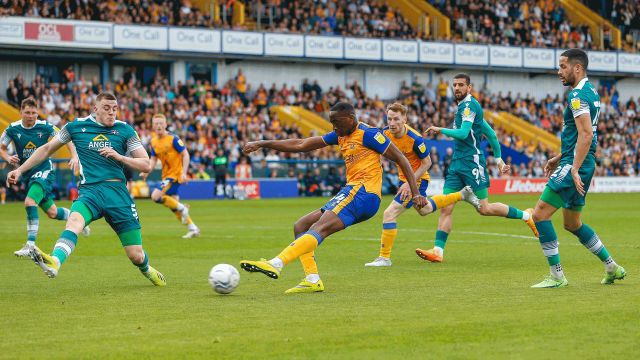