It's an Under-21 side that provides U's with the opposition in the first of the three group games that will be played before mid-November, with Crystal Palace the visitors to the VBS Community Stadium. It's a meeting that has taken place on several occasions in the past, either in a pre-season friendly or the Surrey Senior Cup, but while Tuesday's game is competitive, it is not a knock-out tie and both sides will have a chance to make up for any setback in subsequent games against AFC Wimbledon and Portsmouth, who meet at Plough Lane next Tuesday.

There is a slightly unusual twist to the group games in that, if the scores are level after 90 minutes, both teams will get a point for the draw, but there will also be a penalty shoot-out, which will earn the winners an extra point. After the group games have been completed in November, the top two sides in the group will progress to the knockout stages, the first two rounds of which will be played on a regional basis before an open draw from the quarter-finals onwards.

The current holders are Sunderland, who beat Tranmere in the 2021 final a day after Salford had won the held-over 2020 final, and Bristol City are the most successful side in the competition's history, winning the trophy three times.

Sutton have faced Premier League Under-21 opposition already this season, in a private practice game against Brighton during the pre-season programme in which U's proved too strong for their opposition, but it promises to be a stern technical test against the Palace youngsters.

The competition represents U's most realistic chance of a Wembley appearance and manager Matt Gray will hope that his team can record a victory that would not only improve prospects in that regard, but also give his team a first win of the season and boost confidence after Saturday's last minute defeat against Oldham. One player who won't feature on Tuesday is midfielder Adam Lovatt, who has joined Tonbridge Angels on loan.

The club bars will be open for home supporters only from 6pm. Due to an issue with the credit card machines behind the bar payment by cash would be preferred., The matchday programme, price £3, will be on sale inside the ground and at the club shop. The game kicks off at 7.30pm

Games in the Papa John's Trophy up to and including the quarter finals are live streamed in the UK, so if you can't get to the game you can watch all the action for £10 through our iFollow service. Click here to book your pass. There is no option tonight for a live audio-only match pass, but any supporter who is not in a position to watch the game but would like to listen to it can buy a monthly audio pass which will give access to tonight's commentary and every commentary over the next month, which will include Saturday's game at Colchester which is being live streamed due to this weekend being an international weekend.

Manager Matt Gray opted to give starts to those who had been mainly on the bench in the League Two games so far, with Jon Barden reverting to his original midfield role, although injury curtailed his involvemebt after just eighteen minutes, and Tobi Sho-Silva starting for the first time in any sort of game this season after his pre-season injury, and all those included did their chances no harm with a performance that was lively from start to finish.

Early on it seemed as though U's might suffer a re-run of Saturday as early chances came and went, with Enzio Boldewijn cutting in from the right and hitting a low shot that beat goalkeeper Remi Matthews but not defender Jaroslaw Jach in the six yard box, and Matthews forced in to saves from Sho-Silva and Ricky Korboa.

Palace were also lively early on, with Ben Wyatt having his hands full with Jesurun Rak-Sakyi, who set up one chance for Scott Banks that was saved by goalkeeper Brad House, and then finished another run with a shot just wide, while House had to fist away another effort from Banks, but U's achieved the breakthrough just after the half hour mark.  A long throw from Joe Kizzi was only cleared as far as Alistair Smith, whose mis-hit shot fell nicely for Sho-Silva, who took a touch before shooting high in to the net from eight yards.

There was little sign of a Palace recovery after that, and U's took a firmer grip on the game early in the second half when Smith played a pass out to Korboa on the left and continued his run un-noticed by the Palace defence to meet Korboa's cross with a firm downward header (above). It gave U's a platform from which they dominated the last half hour, Boldewijn and Korboa a consistent threat on the wings with Boldewijn going close to adding a third goal with a header that went just over.

The third goal did come with nine minutes left and was created by a superb interchange between Boldewijn and Kizzi which ended with the latter's low cross being turned goalwards by substitute Donovan Wilson, and although David Boateng blocked the effort on the line Korboa lashed in the rebound for a well-deserved goal. The evening almost had the perfect ending for U's fans as Craig Dundas, on for the last seventeen minutes, was only denied a goal by a good save from Matthews, pushing away an angled low shot, but U's ended an evening that had begun with the re-signing of Isaac Olaofe on loan from Millwall with a comfortable victory that did the prospects of progress in the Papa John's Trophy no harm at all.

Tickets are now on sale for Sutton supporters for next Tuesday's Papa John's Trophy tie at home to Crystal Palace Under 21s, kick off 7.30pm. As part of the Papa John's 2-4-1 promotion, there are sixty free tickets available to home supporters who buy one adult or concession ground admission ticket on a first come first served basis.

When ordering your match ticket, quote the code 'PapaJohn's241' in the promotion code box, and get a second ticket free. It's on a first come first served basis, so when the sixty free tickets have gone, they've gone. Our thanks to Papa John's for the provision of an extra ten tickets as part of their Partner Brand Day in association with next week's game.

Tickets are £12 for adults, £6 for concessions and £3 for Under 16s and free for Under 11s with an accompanying adult. Stand tickets are £14, £8 and £5 respectively. Supporters should both buy their tickets through this link. 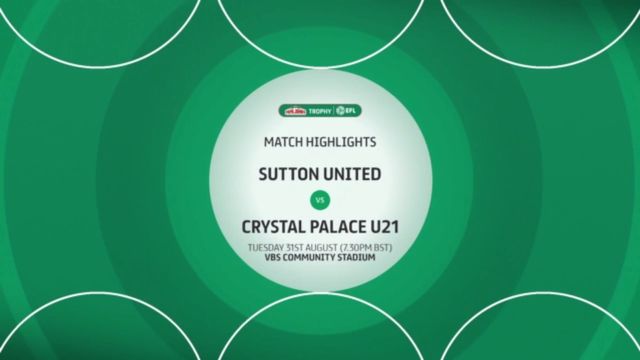