A week which has seen Sutton clock up the motorway miles ends with a first ever meeting with Bradford City on Saturday.

It's so far been a disappointing week in terms of results, with Saturday's FA Cup exit at Bristol Rovers followed by an agonising defeat when Newport's stoppage time penalty saw them win 3-2 after U's had led 2-0 at half time, albeit by then with ten men. Nevertheless U's retained sixth place in League Two despite Tuesday's defeat, and the following evening Bradford drew 0-0 at home to Colchester, their sixth draw in ten home games, and moved up one place to 13th in the table.

One of the favourites for promotion at the start of the season after appointing Derek Adams, who had guided Morecambe to promotion through the play-offs last season, Bradford looked likely to fulfil that promise when they took ten points from their first four games, but their subsequent sixteen games have seen them pick up maximum points on only two more occasions, and are currently without a win in their last six games since beating Swindon in October. However five of those six games have been drawn, so they can equally claim to have only lost only one of their last seven. They have proved difficult to beat at home, with only Hartlepool having returned from the Utilita Energy Stadium with a victory.

Sutton will be without the suspended Craig Eastmond, who will also miss the games against Harrogate and Bristol Rovers after his red card at Newport on Tuesday, against which the club decided not to appeal. Kenny Davis suffered a hamstring injury on Tuesday which sees him join Brad House, Harry Beautyman and Coby Rowe on the list of players who will definitely miss the game, while Ben Goodliffe, who also required treatment at Rodney Parade, is one of five players on whom a late decision will be made, along with Louis John, Joe Kizzi, Isaac Olaofe and Ali Smith.

Manager Matt Gray said in advance of the game: ''Bradford are the best supported club in the division and an ex Premier League club, so it's a game we're looking forward to although with an experienced manager who's had success at this level and some good, experienced players we know it will be another tough match.''

Saturday's referee is Peter Wright from Merseyside, who has taken charge of Sutton on a couple of occasions in the National League and has been an EFL referee since 2018.

Supporters who haven't yet bought tickets for the game but would like to go can buy on the day at Bradford by scanning the QR code by the away turnstile to log on to the Bradford City ticketing system and receive an electronic ticket which will be scanned at the turnstile. There is a short explanatory video here.

Travel details are available here, while as usual supporters unable to get to the game can listen to an audio commentary through our iFollow system. Match passes cost £2.50, and can be bought here.

Sutton finished an arduous week with a hard earned point at the Utilita Energy Stadium, with Bradford City coming from behind twice to grab their 11th draw in 21 Sky Bet League Two games this season despite playing just over an hour with ten men after captain Niall Canavan had been sent off for the foul on Omar Bugiel that allowed Rob Milsom to put U's in front from the penalty spot.

Sutton led for only two minutes before Theo Robinson headed Bradford level, and when Ali Smith, returning from injury, put U's back in front with fifteen minutes to go the lead didn't last much longer, Lee Angol replying five minutes later. Under normal circumstances conceding the lead twice against ten men would be a cause for frustration, but given that U's still had six players missing through injury, were without suspended captain Craig Eastmond and will have clocked up around 1,000 miles on the road this week by the time the coach has returned to Sutton, a draw would have been taken happily before the game. Even with the concession of those goals it might have been better as Louis John, one of the previously injured who was fit to return, was convinced he had either scored, or been denied by a goalline handball, just before half time.

John captained the side in Eastmond's absence, with Smith also fit to return in midfield, and there was an early scare for U's when Donovan Wilson was dispossessed by Levi Sutton, who advanced before shooting just wide. Dean Bouzanis had to back-pedal to turn away an audacious long range effort from Elliott Watt, and also held on to a shot from Robinson, but Sutton worked their way in to the game and Bugiel's pass released Wilson, who got the better of Yann Songo'o but stabbed his shot wide under pressure from the recovering defender.

Two minutes later, though, there was no escape for Bradford when Bugiel dispossessed Canavan some thirty yards out and went through with just Sam Hornby to beat until the centre back compounded his error by pulling Bugiel back. With no attempt to play the ball referee Peter Wright had no option but to show Canavan a red card, and Rob Milsom drilled the penalty in to the top corner of the net.

It was a short-lived lead, however, as within two minutes Will Randall fouled Sutton, although U's felt that Oscar Threlkeld had handled seconds earlier, and Watt's free kick was glanced deftly in by Robinson, Bouzanis getting both hands to the header but unable to keep it out.

Five minutes before half time came controversy, with assistant referee Darren Williams at the centre of the action as he first annoyed Bradford by ruling that Sam Hornby had failed to keep Randall's deflected cross from going out of play. When Randall's corner came in to the far post John's header was scrambled away, but U's skipper was convinced that the ball had either gone over the line, or been kept out by Lee Angol's hand. The assistant's flag this time stayed down, the referee was unmoved, and John's only reward was a yellow card for dissent. It was almost worse for U's, as a minute later Ben Goodliffe was at full stretch to intercept a low Robinson cross and relieved to see the ball fly over his own crossbar.

Sutton threatened again early in thes econd half as Wilson seized on an error by Paudie O'Connor, who recovered well to block the striker's shot, but despite being a man short Bradford still posed a threat, and after a good passing move ended with Threlkeld finding Sutton in the penalty area, he beat John with a neat turn and was entitled to expect one of his team mates to be coming in to the six yard box to convert his low cross.

With the game well balanced U's had another let-off when O'Connor glanced Watt's corner just beyond the diving Songo'o at the far post, but within a minute Hornby had saved well when Bugiel met a Milsom free kick with a glancing header that almost produced a carbon copy of Robinson's goal.

U's made a change with seventeen minutes left, Ricky Korboa replacing Randall, and the substitute had an impact within two minutes. Bugiel set up the chance with a storming run from inside his own half before sending Korboa away with a delightful pass, and the winger beat Threlkeld on the outside before firing in a shot that was pushed away by Hornby on to the head of the inrushing Smith.

Again, though, U's couldn't hold the lead and five minutes later, having controlled Hornby's clearance to start the attack, Angol was in position to score from close range when Sutton was put in by Threlkeld and again played the ball low across goal.

Sutton pushed against the ten men to try and force the winner, and Bugiel sent a downward header just wide from another Korboa cross, but the home side defended solidly and held out for the draw. 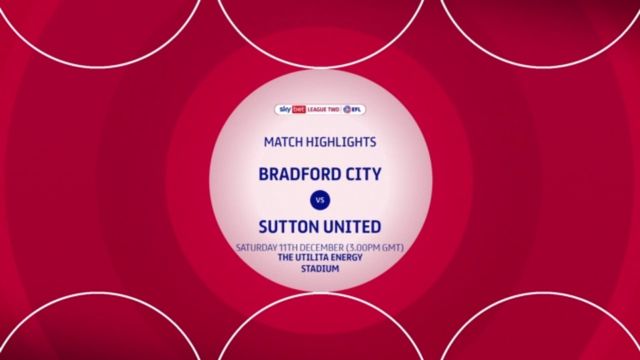 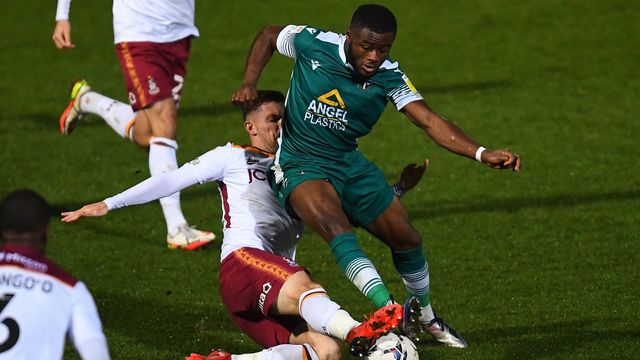