Three days after a visit to Bristol Rovers saw Sutton's FA Cup hopes ended, U's return down the M4 on Tuesday to take on Newport County in Sky Bet League Two. U's will play in green.

Having gone out of the FA Cup in the first round to Morecambe, Newport have had over a week without a game, and will be looking to extend some good recent form which has seen them beaten just once in ten games in the league, and they have been in and around the upper reaches of League Two all season, currently in 9th place, four points behind Sutton. They have also undergone a change of manager this season, with James Rowberry taking over after the departure of Michael Flynn, who had guided the Exiles to the play-off final in two of the previous three seasons.

That one defeat came in their last home game against Swindon, whose away record is the best in the division, with Northampton the only other side to come away from Rodney Parade with maximum points this season.

Newport boast the division's leading scorer in Dom Telford, but he will be missing tomorrow after a positive Covid diagnosis.

Sutton, whose last six away games have seen four victories, will hope to bounce back from Saturday's disappointment and also hope that Isaac Olaofe has recovered from the dead leg that forced him off at the Memorial Stadium, with several players still doubtful due to injury.

Sutton and Newport met for four seasons in National League South between 2004 and 2008, with U's 4-2 victory in the first of those at the Newport Stadium the only time Newport were beaten in the eight games. Going further back U's beat Newport twice in little more than a month in 1992 when Newport were playing at Gloucester, winning 4-1 in the FA Cup and then 2-1 in the Trophy, while in 1988 the sides drew 1-1 at Sutton in the GM Vauxhall Conference but financial problems forced Newport out of the league before the return could be played at Newport's original Somerton Park ground.

Tomorrow's referee is Oliver Langford, who has officiated on a number of occasions in the Championship this season including the recent live televised game between Bristol City and Stoke.

As it is a midweek game, anyone not making the trip to South Wales can watch a live stream through our iFollow system, and passes priced £10 can be bought here.

Newport now play at the Rodney Parade ground close to the city centre and shared with Newport Gwent Dragons Rugby Union club. Full details of ticket and travel information can be found in the article published yesterday, but linked to here.

Of the several stoppage time defeats that Sutton have suffered this season, this one might have been the most painful as, having led 2-0 thanks to two moments of brilliance from David Ajiboye, and playing nearly an hour with ten men after captain Craig Eastmond was sent off, U's saw Newport come back in the second half to clinch victory with a penalty in the third of the four additional minutes at the end of the game.

As well as losing Eastmond, who was playing at centre back in the absence of the injured Louis John and Coby Rowe, U's also saw Kenny Davis limp off soon afterwards, and the resulting reshuffle saw Omar Bugiel filling in in the centre of defence, Jon Barden moved in to midfield and Enzio Boldewijn at right back. The subsequent battling performance against the odds as Newport pressed forward in the second half deserved better than to see Boldewijn penalised for bundling over Jake Cain, giving home skipper Matt Dolan the chance to win the game from the penalty spot after the two goal lead had been wiped out within the first twenty minutes of the second half.

U's went in to the game with several players out already, John and Isaac Oloafe failing to recover from knocks and added to the casualty list, but Newport had their own issues, with leading scorer Dom Telford sidelined due to Covid, and replacement Lewis Collins gave the sort of performance that his manager would have wanted, lively throughout and beginning the comeback with a goal that came close to matching the quality of Ajiboye's first half strikes.

It was Collins who had the game's first chance, being put through by Finn Azaz but sending his shot too high from the edge of the penalty area, and Sutton made the breakthrough in spectacular style in the 24th minute as Ajiboye collected the ball from Davis on the right touchline halfway inside the Newport half, cut inside past Ryan Haynes and left three more defenders in his wake in a dazzling run before shooting low past Joe Day.

Newport tried to reply as Azaz met a cross from Cameron Norman with a volley that was straight at Dean Bouzanis, but they were given an advantage eleven minutes before the break when, having intercepted a pass on the edge of the penalty area, Eastmond slid in to a tackle with Robbie Willmott and although he won the ball his follow through saw him catch the Newport player just below the knee, and referee Oliver Langford had no hesitation in producing the red card.

If that put U's up against it, the perfect reply came three minutes before half time when a long pass from Bouzanis found Ajiboye, again close to the touchline, and again Haynes was no match for the winger, who cut in past his marker and this time curled a left footed shot beyond Day in to the top far corner.

Eastmond's departure had seen Bugiel move in to the centre back position, but any further adjustment that U's might have been thinking of at half time was hampered when Davis limped off, and things might have been worse with Ben Goodliffe also requiring treatment just before the whistle.

He was able to resume after the interval, though, unlike Haynes, who was replaced by Aaron Lewis, but it soon became clear that it was likely to be a backs to the wall effort from U's in teh second half, and the comeback started within eight minutes as Collins drifted in from the left and clipped a fine shot beyond Bouzanis in to the top corner of the net. Eleven minutes later a deep Norman cross found Lewis, whose shot deflected off Boldewijn and Bugiel and fell to Courtney Baker-Richardson, whose mishit shot in to the ground bounced up and over Bouzanis for the equaliser.

With Bugiel excellent in his emergency role, Sutton stemmed the flow of pressure and another fine run from Ajiboye even created a half chance at the other end, Will Randall not quite able to convert a cross chipped in from the by-line. The arrival of Richie Bennett saw a change of formation, Barden, Goodliffe and Bugiel forming a back three with five in front of them, and Newport struggled to turn their considerable possession in to anything that threatened U's goal, the one possible chance created by Azaz, whose shot was turned wide by Bouzanis's foot. Otherwise it was hopeful efforts from distance, and U's were within touching distance of the point the efforts deserved when one more cross from Norman landed at the feet of Azaz, whose shot was blocked by Bugiel, with Bouzanis bundling in to Cain as they contested the looping rebound. The referee pointed to the spot and Dolan sent Bouzanis the wrong way to condemn U's to a cruel defeat. 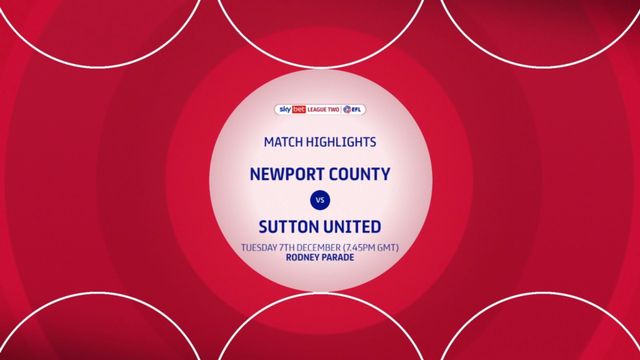 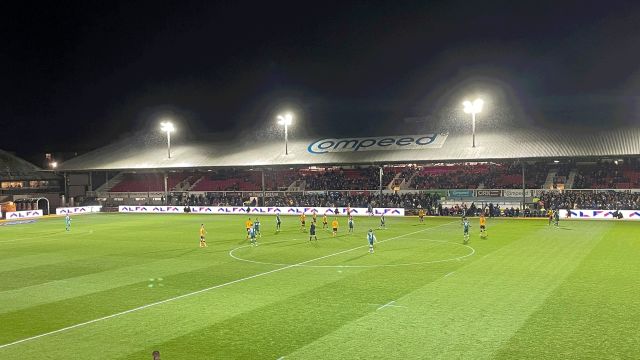