The EFL's two newest members meet at the VBS Community Stadium on Saturday when Harrogate Town are the visitors.

Harrogate were promoted through the National League play-offs at the end of the 2019-20 season, and marked their EFL debut with a 4-0 win at Southend before going on to finish in 17th place, and made a bright start to this season, unbeaten in their first six matches, but a run of only one point from four games in late October slowed their progress and they come in to tomorrow's game in tenth place, although victory would move them above sixth placed Sutton on goal difference.

Harrogate's away form this season is better than their form in home games, with five wins in ten away games coming at Leyton Orient, Mansfield, Oldham, Walsall and Carlisle. They are likely to be without the injured Rory McArdle, Will Smith and Aaron Martin as they look to pick up what would be a first point at Sutton, having lost on their two previous visits.

Sutton manager Matt Gray has welcomed a week off after the arduous programme the previous week, and is hopeful that Joe Kizzi and Isaac Olaofe could return to the squad, while David Ajiboye faces a late test having picked up an injury at Bradford last week.

Tomorrow's referee is Josh Smith, who took charge of the Carabao Cup tie at Cardiff in August.

Following the tragic fire in Collingwood Road on Thursday night, Collingwood Road remains closed and spectators at tomorrow's game, whether driving or on foot, are asked to avoid the immediate area. Harrogate supporters, and any Sutton supporters wishing to use the turnstiles on the Recreation Ground side of the stadium, will need to enter the Recreation Ground from Gander Green Lane.

Tickets will be on sale from the ticket kiosk before the game, but if you want to avoid the queues you can buy online here before leaving home. You can pre-order a match programme, price £3, here.

If you can't get to the game you can listen to commentary on our iFollow service. Match passes, priced £2.50, can be bought here.

Sutton will spend Christmas in an automatic promotion spot in Sky Bet League Two after Donovan Wilson's first half goal was enough to shade a hard fought game against Harrogate, who may well have been the second side in the space of three weeks to head back north from the VBS Community Stadium thinking that they deserved something from the game.

Wilson's goal, a good finish after being put through superbly by Omar Bugiel, was Sutton's best moment of a scrappy first half and in the second half it was the defence that came to the fore as the visitors battled hard to avoid a third consecutive defeat at the ground. Indeed so well did U's defend that, until a superb late save from Dean Bouzanis to deny substitute Jack Muldoon, the closest either side came to changing the scoreline was at the other end as Will Randall was twice only narrowly off target.

Harrogate began brightly, with Alex Pattison prominent,as he would be throughout the game, but apart from one shot dragged wide by George Thomson there was no direct threat to U's goal, and U's began to create openings for themselves. Randall combined well with Ben Wyatt on the left before cutting in and sending in a superb cross which needed just a touch but ended up bouncing just wide of the far post, and three minutes later U's were in front. The ball fell to Bugiel after Wilson and Connor Hall had contested a clearance from Louis John, and with Wilson reacting slightly quicker than his opponent he stayed just onside to collect Bugiel's perfectly timed pass and slot the ball confidently past the advancing Mark Oxley.

Harrogate almost responded three minutes later after Jon Barden was booked for a foul on Jack Diamond, but Thomson's free kick was over the bar, and they started the second half well, with many spectators still coming back to their seats when Ben Goodliffe had to intercept Thomson's dangerous cross and sent the ball over his own goal.

The visitors gifted U's a chance seven minutes in to the half when, anticipating that a Bugiel challenge on Josh Falkingham would be penalised, Lloyd Kerry picked the ball up and referee Josh Smith instead awarded the free kick against him for handball. However Rob Milsom, like Thomson in the first half, was unable to keep his free kick under the bar, and Kerry was soon involved more positively at the other end, combining with Thomson to give Pattison a shooting chance on the right of the penalty area and his angled shot was turned away by Bouzanis.

With Harrogate's attack still lively U's keeper continued to be the busier of the two, but without being seriously tested as Connor Hall's glancing header from Thomson's corner was held comfortably above his head, and substitute Simon Power, having created space for a shot, drilled it low but straight at Bouzanis whose most anxious moment came when Hall almost caught him out of position with a speculative long range shot that wasn't that far wide woth Bouzabnis scrambling. At the other end Ali Smith slid in to send a low David Ajiboye cross just wide with substitute Isaac Olaofe waiting just behind him, while Randall sent a low shot just wide of the far post after Richie Bennett had guided the ball in to his path, and then just missed the near post with another low shot after cutting in from the left.

Harrogate piled on the pressure towards the end, but Sutton's defence cleared or blocked everything, with the attacking players as prominent as the defenders in their efforts, and on the one occasion that a cross, from Ryan Fallowfield, did get through, Jack Muldoon's header was superbly tipped on to the bar by Bouzanis, John cleared the rebound, and U's had the points. 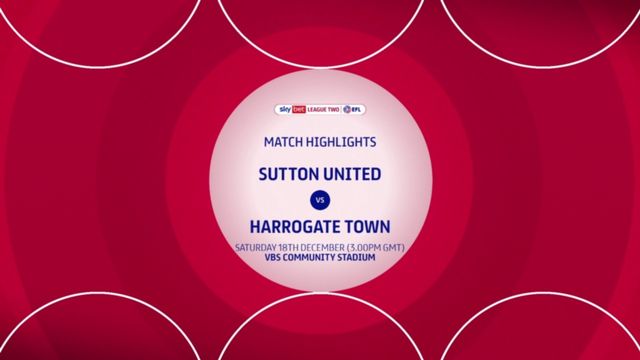 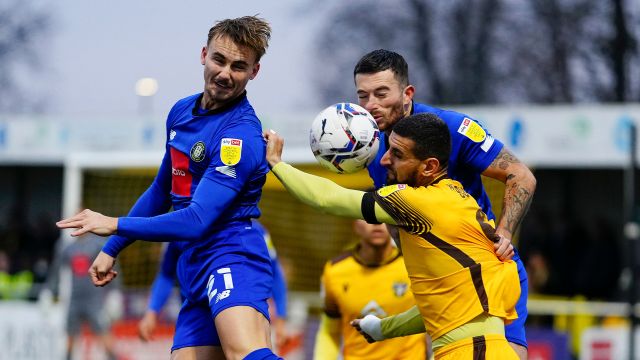