Sutton head to the north east on Saturday to take on Hartlepool United, who claimed the other promotion place from the National League at the end of last season through the playoffs. Sutton will play in black.

Hartlepool go in to the game in good form, having won their last three games, most recently at home to second placed Tranmere on Tuesday evening. Those wins follow a run of seven games without a league win, and have moved them to within eight points of the play-offs, albeit still in the lower half of the table. They have been especially impressive at the Suit Direct Stadium, beaten just twice in fifteen games, with Forest Green and Newport the sides to have come away from the ground with three points and,like Sutton, they have reached the semi finals of the Papa John's Trophy where they will host Rotherham the night after Sutton's trip to Wigan.

Ben Goodliffe scored the only goal of the game when the sides met at Sutton in September, while for U's fans the memories remain of last season's 3-0 win that clinched the National League championship. Hartlepool's single goal win in their home game last season is their only victory in nine league meetings between the sides.

Sutton suffered a first defeat of 2022 on Tuesday at Bristol Rovers, affected by injury and illness, but are hopeful that one or two of those who were absent at the Memorial Stadium may be fit to return. U's remained fifth after that defeat.

In charge on Saturday is Andrew Kitchen, who is in his first season as an EFL referee and who refereed Sutton in the National League last season, most recently in the 4-0 win at Altrincham in April.

The team travelled up on Friday, and we have had no suggestion from Hartlepool that the game is threatened by Friday's stormy weather. The Supporters' Club coach is leaving the VBS at 6.30am, while train travellers are reminded that, even without the added problems caused by the weather, services are disrupted on the East Coast Main Line on Saturday, with the last direct train leaving King's Cross at 7.48, and journey times of over four hours on subsequent trains requiring two changes. The last available return train from Hartlepool is at 17.29, again requiring two changes. For drivers, the post code is TS24 8BZ, and the ground is just off the A689, which you can pick up from the A1(M) at junction 60. More detailed instructions are here.

Tickets can be bought on the day at the ground, prices are: Adults £21; Concessions (65+, Under 19, student and armed forces, ID required) £15; Under 16 £6; Under 5 free with paying adult. Our accommodation is in the Simpson Millar Stand, blocks D-F.

If you're not travelling, we will have an audio commentary through our iFollow service. Supporters without a valid monthly pass or a seasonal pass can buy a match pass for £2.50 here.

Despite the boost of an early goal from Joe Kizzi (above) and having the better of the first half, Sutton had to settle for a point from the long trip north to Hartlepool as the home side recovered after the break to equalise six minutes in to the second half, after which neither side could gain the upper hand.

There was good news for Sutton supporters before the game as Rob Milsom and Louis John were able to return after having Covid and skipper Craig Eastmond took his place in the midfield alongside Ali Smith, although Richie Bennett, Isaac Olaofe and Jon Barden were all still missing, and within three minutes of the start U's had the lead as from the first corner of the game Kizzi headed Milsom's flag kick down and in to the corner of the net to goalkeeper Ben Killip's right.

It was a perfect start against a team going in to the game on the back of three straight wins, the most recent against second placed Tranmere, and drew a response from the home side as Luke Molyneux's first time low shot from the edge of the penalty area came back off the post with Dean Bouzanis beaten. Generally, though, U's were the better side in the first half and might have extended the lead after quarter of an hour when Will Randall's inswinging cross from the left somehow evaded both Omar Bugiel and David Ajiboye, Bugiel's reaction suggesting he had lost the ball in the sun when any contact would almost certainly have produced a goal.

A frustrated Bugiel sent a long range shot high and wide soon afterwards, but U's did have another chance to double the lead when Ajiboye seized on a loose pass and set up Donovan Wilson, who might have shot first time but took a touch and was eventually crowded out as he tried to get his shot away.

Hartlepool had threatened little in the first half after Molyneux had hit the post, Bryn Morris coming closest with a shot from the edge of the penalty area which went wide, but they came out strongly in the second half and, like Sutton in the first half, scored from their first corner. The original move came to nothing, but the ball was worked out to Zane Francis-Angol on the left and his inswinging cross was met by a glancing header from Morris that was going well wide but hit Tom Crawford and fell at the midfielder's feet, leaving him with a simple finish from close range past Bouzanis.

For much of of the remainder of the game the home side had most of the ball and did most of the attacking but U's defence was firm and Hartlepool were mainly reduced to shots from distance. Morris sent one effort straight at Bouzanis, and when the goalkeeper mis-hit a clearance straight to Crawford, the Hartlepool player delayed getting his shot in sufficiently to allow Ben Goodliffe to clear in the penalty area.

Neither side could really claim to have done enough in the last half hour to force a win, and although Harry Beautyman, brought on up front alongside Bugiel, almost got on the end of a long Milsom throw in stoppage time, the ball rolled harmlessly though to Killip and a draw seemed about right. 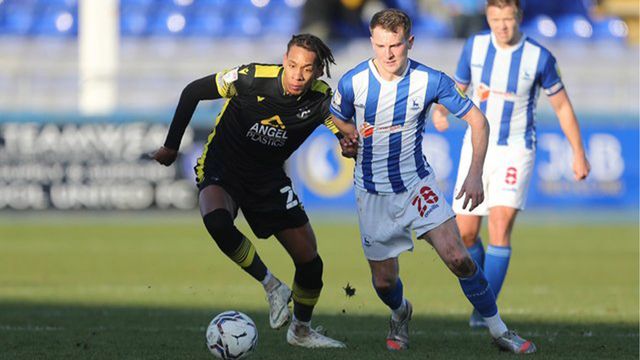