After two away trips, Sutton return to home turf this weekend on a day when the club will induct six more individuals in to the Sutton United Hall of Fame, with this year's three inductees joined by those who would have been inducted last season but for the Covid restrictions. The presentations will be made in front of the main stand about fifteen minutes before kick off.

Paul Rogers receiving his certificate from  Brian Williams at the 2019 Hall of Fame presentation.

Once the action starts on the pitch, U's will face the club currently lying at the foot of League Two, with Scunthorpe, who avoided relegation by three points last season, now six points adrift of 22nd placed Oldham despite a 3-1 win at Boundary Park on Boxing Day. Since then the Iron have won only once in eleven league games, the victory coming at home to Walsall earlier this month, but they battled for a good point on Tuesday in a goalless draw with Northampton, who moved up to second in the table as a result, and U's manager Matt Gray knows that nothing can be taken for granted, saying: ''Their draw on Tuesday shows that there's not a great deal between the sides at the top and the bottom of the table, and I'm not expecting anything other than a very tough game.''

When the sides met at Glanford Park in August Jake Scrimshaw's goal early in the second half gave Scunthorpe the lead, but a late Donovan Wilson goal earned U's a point which might have been more with Wilson and Craig Eastmond both missing good chances in injury time.

Since that game manager Neil Cox has been replaced as manager by the experienced Keith Hill, who has taken charge of over 700 games in his managerial career, most of which were at Rochdale, where he spent eleven years over two spells. He will be without defender Lewis Thompson on Saturday after the defender suffered a serious injury on Tuesday, and has several other players recovering from injury or illness.

Sutton will still be without Jon Barden, Richie Bennett and Isaac Olaofe, with Matt hoping that the first two will be able to return shortly, saying: ''Richie is still recovering from his wrist operation but I would expect this to be the last game he misses, and Jon, who has an abdominal strain, may also be back for next week. Tanto was due to have a scan on his hip injury on Thursday and we'll know more after that.''

Referee tomorrow is Simon Mather, who was in charge on that memorable afternoon last May when U's clinched the National League title against Hartlepool, and has returned once since then, for the home game against Carlisle in September.

Tickets are on sale for the game on line here, and we would recommend buying them through this method before leaving for the game. If you do want to buy in person, please arrive at least an hour before kick off to avoid queues around the ticket kiosk and turnstiles prior to the game. Scunthorpe supporters wishing to buy on the day can do so from turnstiles 9 and 10 at the Collingwood end of the ground.

A programme can be ordered on line here, and this will be sent out after the game. If you can't get to the game we will have our usual audio commentary through our i-Follow service and anyone without a valid monthly or seasonal pass can buy a pass for £2.50 here.

Sutton ended a run of five games without a win in convincing fashion, three goals in a ten minute first half spell giving them control against a Scunthorpe side now seven points adrift at the foot of the Sky Bet League Two table

There was little hint of what might happen in a shapeless first quarter of the game, the flow not helped by an injury to referee Simon Mather after just thirteen minutes, but once Rob Milsom had converted a penalty following Manny Onariase's clumsy challenge on Omar Bugiel U's took control and had the game just about sewn up by half time.

Scunthorpe, with only one win in their last eleven games, started as though they might cause U's some problems, with Ben Goodliffe twice having to make important interceptions, and Joe Nuttall diverting Tyrese Sinclair's cross goalwards but without the power to beat Dean Bouzanis. For U's Donovan Wilson fired a shot wide of the near post, and a low cross from Will Randall was scrambled away from the incoming David Ajiboye, but neither side managed to get much flow to their game in an untidy opening spell that included a break of nearly five minutes when Simon Mather limped off with what looked like a hamstring injury to be replaced by Stuart Butler.

The spark the game needed came just before the half hour when Bugiel collected a ball down the left from Milsom and turned in to the penalty area past Onoriase, whose attempt to recover the situation only resulted in him bundling Bugiel over. It was an easy decision for the replacement referee, and Milsom netted from the spot although Rory Watson managed to get a hand to the shot.

Little more than a minute later U's had a second, Wilson shaking off a challenge in midfield and playing the ball wide to Randall, who cut in past Ross Millen and curled a low shot in to the far corner of the net from just outside the penalty area. Millen's complaints that he had been fouled by the scorer saw him booked, the referee's indication of advantage being played suggesting that he felt any foul was the other way.

Now in control, U's added a superb third goal nine minutes later, Ajiboye beginning a move that involved Milsom, Randall and Bugiel, whose pass to the overlapping Joe Kizzi allowed the defender to hammer a shot past Watson and score for the second Saturday in a row, the only time in the move that the ball left the ground.

Scunthorpe's made a double change at the break, including taking off Nuttall, who had been walking a disciplinary tightrope after being booked early on for an aerial challenge on Louis John, and bringing on Harvey Cribb, who became the youngest first team player in Scunthorpe's history just over a month after his 16th birthday. He could have seen his team concede within ten seconds of his introduction, as Bugiel pounced on an error by Onoriase and set up Ajiboye, whose shot was saved by Watson with his legs, and there should have been another when Ajiboye was put through by Kenny Davis and cut across the penalty area before Bugiel took over but shot too high.

Just after the hour mark, though, U's did have a fourth when Bugiel cut in from the right and played a pass to Wilson just before being fouled, and with the referee playing a good advantage Wilson opted against going for goal himself and instead set up Randall, whose shot (above) slithered under Watson giving him two goals in a game for the first time.

U's then made changes, Coby Rowe and Harry Beautyman coming on to continue their return from injuries, and for a moment Beautyman thought he might celebrate with a goal as his shot from outside the area was blocked. He did end up on the scoresheet, but not as he would have hoped as a Scunthorpe counter attack after Watson had punched clear a Milsom free kick ended with Rekeil Pyke crossing low, and Beautyman sliding in to clear but able only to turn the ball in to his own net, although Liam Feeney would almost certainly have scored but for Beautyman's intervention.

A minute later Bouzanis had to save a long range shot from Jai Rowe, but the visitors were unable to make any further impression on the game as U's closed out a comfortable victory and moved to within two points of an automatic promotion place as the top three in the division all lost. 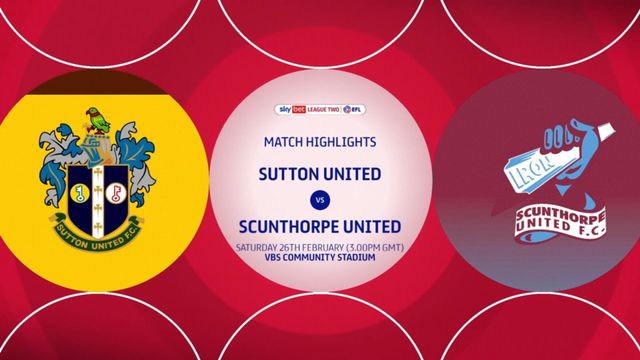 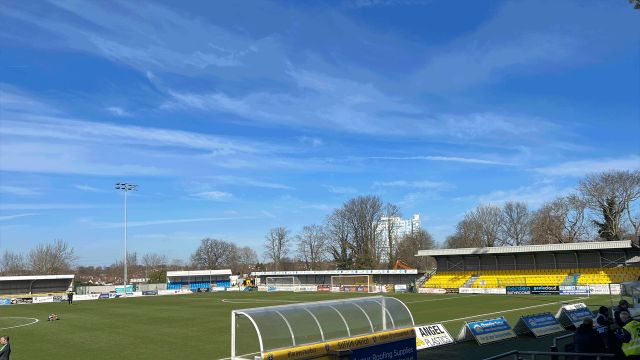