It's the longest trip of the season for Sutton on Saturday with a first ever visit to Carlisle United's Brunton Park ground. U's will be wearing all black.

September's meeting at Sutton was an important one for U's, a convincing 4-0 victory setting aside the disappointment of the previous week's defeat at Exeter (above, Ali Smith scores the second of his goals), while for Carlisle it was the first of three defeats without scoring which were to cost Kenny Beech the manager's job as the Cumbrians languished in 22nd place in the table.

Former Bristol City and Crystal Palace manager Keith Millen has subsequently taken over, and although it took five games for him to register his first League Two win Carlisle's recent form has been good, last week's defeat at leaders Forest Green ending a run of five games unbeaten which has seen them move eight points clear of the bottom two.

One signing this week has been highly rated defender Dynel Simeu, a centre back who was with Chelsea as a youngster before moving at the start of this season to Southampton, from where he has signed on loan for the rest of the season.

Sutton are unbeaten in six league games and also now in the semi finals of the Papa John's Trophy, the draw for which will be at around 7.30 on Saturday evening, but lost third place in the league on Tuesday with Newport's win at Leyton Orient. Will Randall limped off during Tuesday's defeat of Harrogate and faces a fitness test, otherwise with the exception of long term absentees Coby Rowe and Harry Beautyman U's have no injury worries.

Referee tomorrow is Darren Handley from Bolton, who has been a Football League referee since 2014 and whose only previous game in charge of Sutton was the FA Cup 1st round tie at Cambridge United in November 2017.

Full travel information is in the news item posted on Wednesday which can be linked to here .

If you can't make it to the game you can listen as always to an audio commentary through the iFollow system. If you don't have a valid monthly or seasonal pass, you can buy a match pass for £2.50 here.

Sutton continued an unbeaten start to 2022 by completing a Sky Bet League Two double over Carlisle at a blustery Brunton Park.

U's won the game with an impressive first half performance that produced goals from Isaac Olaofe and David Ajiboye in an eight minute spell either side of the half hour mark, and might have led by more as goalkeeper Mark Howard made a superb point blank range stop from Richie Bennett, but although Carlisle were better in the second half U's defence stood firm to record an eleventh league clean sheet of the season and remain firmly in the promotion picture, now just a point behind second placed Tranmere.

Bennett was in the starting line-up against his old club due to Omar Bugiel being unwell, and he and Olaofe enjoyed a fine first half against a Carlisle defence in which Dynel Simeu made a debut following his loan move from Southampton.

Neither side found the strong wind easy to cope with in the early stages of what looked set to be a scrappy game, and Ben Goodliffe had to make two good interceptions to cut out crosses from the left, while a corner from Callum Guy passed dangerously across the face of goal. There was also an attempt by Jon Mellish to catch Dean Bouzanis off his line with a shot from inside his own half, with the keeper able to adjust his position and save comfortably, but the breakthrough came at the other end midway through the half, as Ben Goodliffe brought the ball forward before finding Rob Milsom on the left, and his cross was headed out by Simeu as far as Olaofe, who took a touch before firing a low left footed shot past Howard.

Carlisle might have equalised within minutes as Omari Patrick, their most threatening player all afternoon, sent over a superb cross from the right that was met by a diving Jack Armer at the far post but the angle proved just too tight and the ball rebounded back off the post.

That was as close as Carlisle were to come as Sutton dominated the remainder of the half, and just after the half hour mark U's scored a superb second as a slick passing movement involving Louis John, Bennett, Craig Eastmond and Olaofe ended with Bennett slipping a pass through to Ajiboye, who held off his challengers and shot low in to the net.

Although Bouzanis had to save a Guy shot at the second attempt U's might have had more before the break, with Howard having to tip away a Milsom corner that threatened to sneak inside the far post, and then saving low down from Enzio Boldewijn after the winger had cut in from the left to create a clear shooting opportunity. The keeper then kept his side in the game in first half stoppage time when Olaofe pounded on some hesitant defending from Rod McDonald and cut the ball back from the by-line for Bennett, whose close range shot was somehow kept out by Howard, who also saved Ali Smith's shot as the ball ran loose.

Carlisle needed to have a good start to the second half but it was U's who came close to extending the lead when a mistake by Simeu left Olaofe clear, but the defender did well to make up for his error by getting back to block Olaofe's shot. After Jordan Gibson had replaced Tyrese Omotoye Carlisle enjoyed their best spell, with Joel Senior's cross deflected just wide of his own goal by John, who was then in the right place in the six yard box to block a Mellish header after Brennan Dickenson's cross had been headed back by Gibson.

Bouzanis pushed away a low shot from Gibson as Carlisle looked in vain for a way back in to the game, but Sutton were largely comfortable and should have won by more as two minutes from time Boldewijn played a one-two with substitute Donovan Wilson to leave himself with just Howard to beat, but put his shot too close to the keeper who was able to save. It wasn't an expensive miss, though, as U's were soon able to celebrate a first away league win since mid-November with the 118 supporters whose 660 mile round trip was well rewarded. 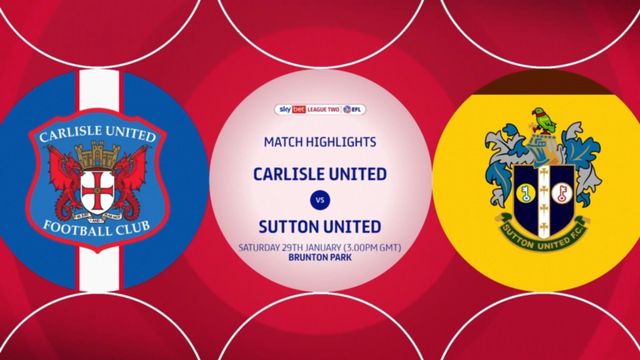 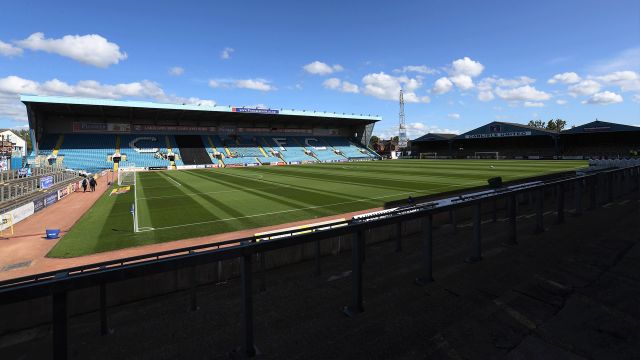