After the frustration of a wasted trip north last Saturday, Sutton will be hoping for better luck with the weather when making the rather shorter trip to Stevenage on Saturday.

It will be the third meeting between the sides this season, with U's first EFL win coming in the league game at the VBS Community Stadium in September when Richie Bennett's two goals turned the game round after Elliott List had given Stevenage the lead. Just under three months later it was a goalkeeper rather than a striker making the headlines as Dean Bouzanis saved three consecutive penalties in a shootout to see U's through to the last sixteen of the Papa John's Trophy after a goalless 90 minutes.

That game came a couple of days after Paul Tisdale had been appointed as Stevenage manager following the departure of Alex Revell, and he picked up his first win last weekend with a 3-1 success at home to Walsall. He has made several additions to the squad during January, with experienced defender Michael Bostwick returning to the club from Burton and midfielder Ed Upson signed from Newport, while goalkeepers Laurie Walker and Christy Pym have joined from MK Dons and Peterborough respectively - on loan Joseph Anang, who kept goal in both games against Sutton, has returned to West Ham.

Stevenage put four points between themselves and the bottom two with that win over Walsall, their fourth at home following earlier wins against Colchester, Hartlepool and Barrow.

Sutton remained fourth after the midweek fixtures saw Swindon beaten at Mansfield, and Matt Gray has almost a full squad to choose from, with two minor injury and illness concerns but otherwise only Coby Rowe and Harry Beautyman remaining on the sidelines, and Craig Eastmond finally available again after serving suspensions in both League Two and the Papa John's Trophy.

Matt has added to the squad today with the signing of experienced goalkeeper Stuart Nelson, who was most recently with Dorking Wanderers but has made around 500 appearances in a career that has spanned twenty years, most notably with Brentford, Notts County and Gillingham. Brad House is likely to go out on loan, and Matt explains more in our pre-match interview which will be on line later today.

The clubs met today in the EFL Youth Alliance at the VBS and U's struck an early blow with a resounding win against a Stevenage side third in the South East table. Euan Mutale led the way with four of the goals, and there was a goal apiece for Kai Tanner and Daniel Olaybiyi.

Referee tomorrow is Paul Howard, who has refereed several Sutton games at National League level and took charge of the game at Rochdale in October.

Admission is available on the day, prices are: Adults £24; Concession £22; Under 18 £16; Under 12 £10. Concessions are: Disabled (Proof of medium–high living disability allowance or equivalent PIP Award); Students with valid ID Card; 60 & over – Born on or before 31/07/1962; Ex/Current Serviceman/woman (with a Defence Discount Service Card); NHS/Emergency Service Workers. Our accommodation is in the South Stand.

Supporters are welcome to have a prematch drink in the Broadhall Suite, next to the away end.

The Supporters' Club coach leaves the VBS at 12 noon on Saturday and is now fully booked.

For independent travellers the ground is on the A602, just off junction 7 of the A1(M). You will see the ground by the second roundabout after leaving the A1(M), and free parking for 500 cars is available at Fairlands Valley Car Park, on the left opposite the ground. Please do not park in any of the nearby retail parks - alternative parking is available in town centre pay and display car parks.

By rail, with Stevenage now on the Thameslink service it is an easy trip from Sutton, taking about an hour and a half, changing somewhere between Blackfriars and King's Cross(leave Sutton xx16 or xx46), or at London Bridge (xx26 or xx56). The ground is a mile from the station. Turn left out of the ticket barriers towards the town. Take the stairs on the right before the bridge over the dual carriageway and head along the A602, Lytton Way with the railway on your right. At the roundabout which has the police station on the right, use the underpass to take the second exit into Six Hills Way towards Asda. At the next roundabout take the third exit (South) continuing along the A602 Monkswood Way, passing Asda on your right and North Herts College. After about 3/4 mile you will arrive at a roundabout and the ground will be opposite you on the other side of the A602.

The refusal to accept defeat that has characterised so many Sutton performances in the past two seasons was on display again at the Lamex Stadium when, having been two down at half time, and then gifted Stevenage a third goal just after a brilliant Ali Smith effort had reduced the arrears, U's rescued a point with a header from substitute Richie Bennett in the eighth minute of stoppage time.

It was a fitting end to an increasingly entertaining and at times chaotic game, with U's feeling aggrieved with referee Paul Howard over both the goals that saw them trail at the break, but then getting the benefit of a controversial decision within two minutes of Stevenage's third goal that allowed Rob Milsom, culpable in that third goal, to re-ignite U's hopes from the penalty spot. Add in the failure of one of the floodlights for ten minutes in the second half, and a brief cameo from goalkeeper Dean Bouzanis as a right winger as U's looked for the equaliser, and it was an afternoon that gave the crowd of just under 3,000 plenty to discuss.

Without the injured Omar Bugiel, U's fielded Tobi Sho-Silva and Donovan Wilson in attack with Isaac Olaofe on the left. The first half was an untidy affair in which neither side reached great heights, but it was Stevenage who looked more dangerous and Bouzanis had to be off his line quickly to deny Jake Taylor, while Chris Lines and Jamie Reid both miscued shots from promising positions and Bouzanis was down to beat away a low Jake Reeves shot after the midfielder had cut in past Ben Goodliffe on the left.

Sutton's first moment of threat came when Bouzanis came outside his area to clear an underhit Milsom backpass, and Olaofe collected the hurried clearance and took advantage of a slip by Luther James-Wildin to attack the Stevenage penalty area and fire a low shot just wide.

Within a couple of minutes, though, Stevenage were ahead. U's felt Goodliffe was fouled by Norris as they tussled for the ball in midfield, although home supporters had been appealing for a decision the other way for Goodliffe's original challenge, but the referee allowed play to continue with Reid and Taylor, the latter surviving a tight offside call, combining to return the ball to Norris, who placed his shot beyond Bouzanis.

Stevenage's tails were up, and five minutes later, after Louis John had cleared Ben Coker's low cross inside the six yard box, Olaofe was penalised for a challenge on James-Wildin although U's felt the tackle was fair. The resulting free kick was well worked, and Coker's cross was glanced in by Reid. John prevented worse damage before the break when he blocked a Taylor shot, while at the other end his header on from a free kick led to Goodliffe shooting too high.

Three minutes after half time the floodlights on one of the pylons failed, with the referee deciding that play could continue for the time being and happily full light was restored within a quarter of an hour. By that time Bennett and Will Randall had replaced Wilson and Sho-Silva, Olaofe moving up front, and the move had immediately reaped dividends. Bennett headed on Jon Barden's throw-in, and Lines could only head clear as far as Smith, whose sweetly struck half volley from twenty yards flew in to the far corner.

Sutton then enjoyed a good spell and looked capable of an equaliser, Luke Prosser clearing a Randall cross just before Bennett could get his head to it, only to start creating self-inflicted threats. The first was survived as Bouzanis came outside his area to clear a long pass but saw his clearance blocked by Reid, the ball rebounding goalwards in to the penalty area and Bouzanis just winning the race to slide in and force the ball out of play. However U's weren't so lucky three minutes later when Stevenage were penalised midway inside the Sutton half, but with Bouzanis coming out to take it Milsom instead tried to play a quick free kick across to Barden, only for Reid, looking less than ten yards away, to intercept and roll the ball in to the unguarded net.

Milsom would soon have a chance of redemption, though, as within two minutes Bennett flicked on a Bouzanis clearance and Olaofe's pace unsettled Scott Cuthbert, who failed to put enough on his header back to goalkeeper Christy Pym, but seemed to have saved the situation with a challenge on Olaofe that put the ball out for a corner. The referee thought otherwise though and pointed to the penalty spot, and after the appeals had been waved away, Milsom confidently converted the kick.

U's were almost level five minutes later when goalkeeper Christy Pym had to scramble across to keep out a Bennett shot from close range, and Bouzanis needed to make two good saves from Norris and Reeves to keep U's in the game,  inside the last ten minutes it was U's pressing for an equaliser. Randall's shot was deflected for a corner, Kenny Davis, on for Craig Eastmond, had a shot blocked, and Bouzanis, having come almost to the halfway line to meet a Stevenage clearance, then beat two players on the right wing and sent in a cross that flashed across the penalty area. He was on the halfway line again in the eighth minute of stoppage time, this time to launch one last free kick in to the Stevenage area, and although it was cleared as far as Barden, his pass gave Ajiboye the chance to chip the ball to the far post and Bennett, whose last goals for Sutton had been in the 2-1 win over Stevenage in September, powered a header in to the net in front of the 388 travelling supporters to spark wild celebrations. 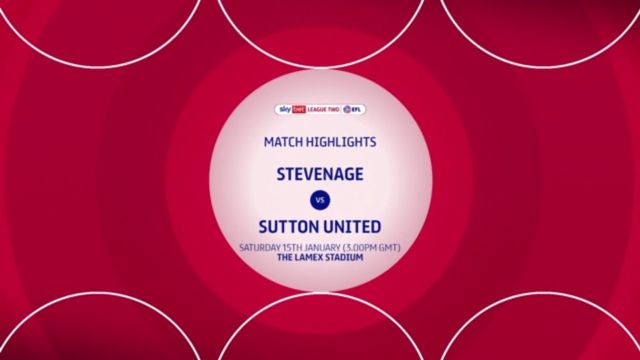 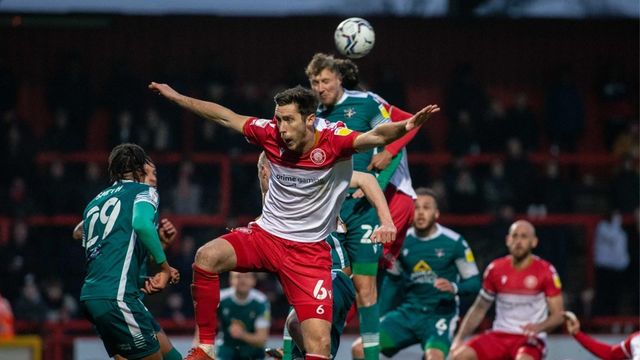