A fortnight after a memorable Tuesday night trip to Lancashire, Sutton are back in the north west this Tuesday for a rearranged Sky Bet League Two game at Oldham Athletic.

Us have already travelled to Boundary Park once this season, but with players, officials and supporters all at the ground in January the game was postponed due to a waterlogged pitch, and so the teams will try again this week.

The run of form that followed John Sheridan's re-appointment as manager in January and promised to lift Oldham clear of the relegation spot they have occupied for much of the season has stalled recently, and they go in to the game on a run of four consecutive defeats which have kept them in 23rd place, albeit just three points behind Stevenage and with this game in hand and a better goal difference. Oldham were on a similarly poor run when they visited the VBS in August for the first League Two game on the ground, but after opening their season with four defeats, and going behind to David Ajiboye's goal, they came back with an equaliser from Carl Piergianni, who has scored in his last three appearances against Sutton having scored home and away for Salford in the 2018-19 season, and an injury time winner from Junior Luamba.

Sutton were at the wrong end of the table as well after that result, but have recovered superbly during the season and although two defeats and a draw in the last three games have seen Us drop out of the play-off positions, there is only a five point gap to Northampton in the third automatic promotion place and U's, in ninth, have games in hand on five of the top eight teams. U's are still likely to be missing a number of players through injury, but Harry Beautyman is expected to be able to return to the squad.

The referee is Marc Edwards from Tyne and Wear, who is in his third EFL campaign and refereed several Sutton games in the National League, most recently at Halifax in December 2018.

A reminder to Sutton supporters that tickets that were held for the original game in January are valid tonight, as are any iFollow passes that were bought. Anyone needing to buy a ticket at the ground can do so, prices are £22 for adults, £10 for over 65 and under 21, and £7 for under 18, while anyone who doesn't have an iFollow pass for the original date but who would like to watch the live stream of the game can buy a pass here.

There is no supporters' coach tonight, for independent travellers the ground is just off the A627, reached most easily via junction 21 of the M60 or junction 20 of the M62. Parking is available in the hospital car park, price £5 - postcode OL1 2PA. The ground is about a 20 minute walk from Westwood tram stop on the Manchester Metro, but supporters should note that there is no tram service this week through Manchester Piccadilly station and it is necessary to walk from Piccadilly to Manchester Victoria to pick up the tram to Oldham.

The 62 Sutton supporters who made the long trip north to Oldham were rewarded as Sutton returned to winning ways with a victory at Boundary Park.

It was a particularly rewarding night for Ricky Korboa, the winger making only his third EFL start of the season after manager Matt Gray was forced again to reshuffle his side due to injury, who scored twice to set U's on the way to an ultimately comfortable victory against an Oldham side failing to take advantage of their game in hand over Stevenage to remain three points adrift in the relegation zone.

U's had lost Joe Kizzi and Craig Eastmond to injury, with Enzio Boldewijn dropping in to right back and Kenny Davis providing Adam Lovatt with a third midfield partner in three games, as well as taking the captain's armband

Encouraged by a noisy home support Oldham made the brighter start, with Dylan Bahamboula beating Ben Wyatt to a through ball and racing down the left, although his cross was overhit, and Hallam Hope heading over from a Nicky Adams cross, but Sutton slowly took the sting out of the threat and then struck at the other end in the 20th minute when a long Wyatt throw was helped on by Richie Bennett and Omar Bugiel, and although Benny Couto was covering at the far post, his clearance ricocheted back off Korboa in to the net to give the winger his first league goal of the season.

The goal knocked the confidence of a home side coming in to the game on the back of four consecutive defeats, and U's were in control for much of the rest of the half as the home supporters became increasingly frustrated. There might have been a second goal, with Ben Goodliffe heading wide from a corner, David Ajiboye's shot blocked by Couto after he had been put through neatly by Bugiel, and just before half time Goodliffe was just off target with a spectacular overhead kick from close range after Coby Rowe and Bugiel had headed on a Dean Bouzanis free kick, although Bennett, just behind Goodliffe, might have had the better chance of scoring. U's might also have had a penalty when the ball appeared to strike Couto's arm as he tried to prevent Ajiboye creating a chance on the right, the defender turning round to begin his protests before realising that referee Marc Edwards had waved play on .

Although U's hadn't taken one of the late first half chances, there was no mistake three minutes in to the second half when an Oldham free kick fell to Davis, who calmly brought the ball out of the penalty area and then played a superb pass through the middle for Korboa, who was free to run on and drive a low shot past Danny Rogers (above). It was a hammer blow to the home side's hopes, although they almost replied immediately when, from a throw in conceded by Dean Bouzanis after his initial clearance had been charged down by Davis Keillor-Dunn, the ball fell to Hope on the corner of the penalty area and his dipping volley came back off the bar with Bouzanis beaten.

U's remained on top, though, with Davis replaced by Harry Beautyman after an hour, and after Coby Rowe had found Bugiel in acres of space, the striker set up Bennett for a curling shot which was well saved by Rogers, who then produced another good stop to deny Korboa his hat-trick from the rebound. Goodliffe headed over from a good position, and Bennett misdirected a volley wide, but with thirteen minutes to go Ajiboye sprinted on to a Bennett pass, leaving Tope Obadeyi in his wake and in his attempt to recover, the substitute brought Ajiboye down, giving the referee an easy decision, one of only thirteen fouls in the game. Beautyman put his failure from the spot in the Wigan shootout behind him with a confident penalty in to the bottom corner

Oldham gave their supporters a glimmer of hope when Will Sutton headed in a Jack Stobbs cross from close range, and Bouzanis made a good stop with his legs to deny Stobbs a second which would have given U's an unnecessarily anxious last five minutes, but U's, who ended the game with a strike force separated by 23 years, almost had the last word when the junior partner, Kylian Kouassi, volleyed over from just inside the penalty area. 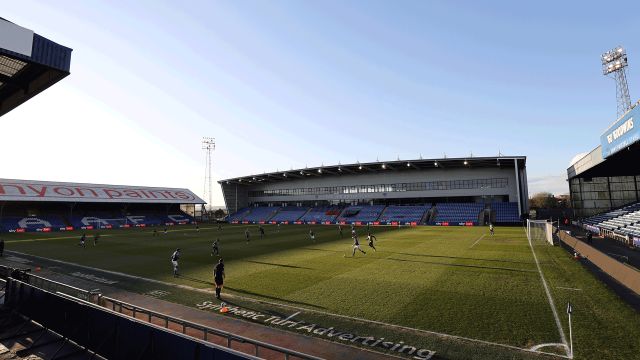 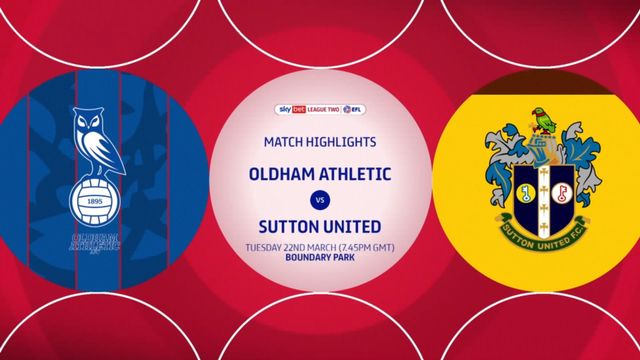