Are you sure you want to delete this event?

Sutton head to the north-west on Tuesday within one game of a first Wembley final since 1981 with Wigan Athletic the opposition in the Papa John's Trophy semi-final. U's will be wearing amber.

Since U's ran out against Bishop's Stortford in the 1981 FA Trophy final Wigan have visited Wembley on three occasions, winning this competition in its various guises in 1985 and 1999(when former Sutton favourite Paul Rogers scored the winner against Millwall), and then memorably beating Manchester City in the FA Cup final in 2013, and like U's they are battling for honours on two fronts, with their Papa John's campaign running alongside their efforts to regain the Championship place they lost amid off-field problems in 2020. Saturday's win against AFC Wimbledon saw the Latics close the gap on leaders Rotherham to four points with two games in hand.

Wigan reached the semi-finals coming second in a group that was topped by Crewe and also included Shrewsbury and Wolves Under 21s, then knocking Accrington out on penalties before a 6-0 win at Oldham in the last sixteen and a single goal defeat of Arsenal Under 21s in the quarter final. They have three players, James McClean, Tendayi Darikwa and Graeme Shinnie who are suspended in the league but can play on Tuesday, but Glen Rea and Max Power were injured in the game against Wimbledon.

Sutton, who topped a Papa John's group that included Portsmouth, Wimbledon and Crystal Palace Under 21s and then beat Stevenage thanks to a hat trick of penalty saves from Dean Bouzanis before beating Colchester and Harrogate at the VBS, moved in to the automatic promotion places of League Two with Saturday's win against Rochdale, but lost Kenny Davis in the first ten minutes and he is one of several players who Matt Gray will make a late decision on.

Tuesday's referee is James Bell, who was in charge of both U's games against Forest Green this season. The game will go to penalties if it is a draw after 90 minutes, with extra time only played in the final.

We have sold nearly 300 tickets for the game, with two supporters' coaches travelling up to the DW Stadium leaving Sutton at 1.15,  but tickets will be available on the night from windows 1-3 of the ticket office in the north west corner of the ground, with our accommodation in the North Stand. If you can't get to the game it is being televised live on Sky, and while that means we cannot show a live stream through the iFollow system we will have an audio commentary on iFollow, and if you haven't got a valid monthly or seasonal pass you can buy a match pass for £2.50 here.

For independent travellers details are as follows.

Rail: From Euston to Wigan North Western at half past the hour to 16.30, then at 16.57 and 17.26, taking about two hours. The ground is about a mile and a half from the station, so best reached by taxi from the station. There is no train back the same night - the first direct service back on Wednesday morning is at 05.45.

We wissh everyone a safe journey and thank you for your support.

The match winner in the first knockout round of the Papa John's Trophy against Stevenage when he saved three successive penalties, Dean Bouzanis repeated the trick in sensational circumstances at the DW Stadium to send Sutton to Wembley for the first time in 41 years, saving twice in the penalty shootout as well as converting a spot kick of his own as U's won 7-6 on penalties after a 1-1 draw.

The 320 travelling supporters were sent in to ecstasy as Bouzanis dived to turn away Wigan captain Tendayi Darikwa's penalty, having also saved Wigan's first penalty from Max Power, and then converted U's seventh penalty with as impressive a spot kick as any in a high quality shootout.

U's matched the League One promotion chasers throughout the game, leading through Will Randall's 29th minute goal before being pegged back by James McClean's vicious strike ten minutes later, and then missing several chances early in the second half before Wigan manager Leam Richardson, who had changed the entire starting line-up from Saturday's league win against Wimbledon, brought on three of his main players midway through the second half, after which U's were on the back foot but held the home team at bay to set up the shootout.

U's team selection involved less major surgery, Harry Beautyman remaining in midfield as Kenny Davis failed to recover from the injury that forced him off on Saturday, and Donovan Wilson and Will Randall replacing Richie Bennett and Enzio Boldewijn, and in an untidy first quarter of the game it was Wigan who had the first real chance as a mistake by Louis John on the halfway line allowed James McClean to send Jamie McGrath through, but he rolled his shot just the wrong side of the post as Bouzanis came out.

Sutton gradually asserted themselves, though, the home defence put under pressure when in possession, and so nearly went in front when, from the first U's corner of the night, Joe Kizzi headed against the foot of the post from Randall's delivery. Nine minutes later, though, U's had the lead when a free kick from Bouzanis was headed on by Omar Bugiel and expertly laid off by Wilson for Randall, who controlled the ball with a hint of unintentional handball before rolling it past goalkeeper Jamie Jones.

Wigan responded well to going behind with McClean, one of three players eligible to play despite being suspended in the league, their biggest threat and he cut one cross low in from the left that ran all the way through to Tom Bayliss, whose shot was too high. Moments later, though, McClean had equalised when Tom Pearce, again with an equal hint of an equally unintentional handball, controlled a crossfield pass on the left and played the ball inside to McClean, whose thumping drive gave Bouzanis no chance at his near post.

Having finished the first half under pressure, U's turned things round early in the second half and could have retaken the lead on several occasions. Kizzi again came close to scoring for the fourth game in a row when David Ajiboye rolled the ball back from the by-line in to his path, but mis-hit his shot and allowed Jones to save, while Randall had the goalkeeper diving to his left to keep out a trademark curling shot from the edge of the penalty area, and Bugiel volleyed over from Wilson's cross before being denied by the legs of the keeper from a narrow angle after pressure from Ajiboye and Wilson had forced a defensive error.

The triple substitution changed the game, though, and U's saw little of the ball for the last twenty minutes. The defence was organised, though, and Wigan had to be patient to try and create any openings. Josh Magennis glanced a header over from a McClean cross, and Bouzanis made a good low save from McGrath, but for their overwhelming possession advantage the home side created few other clear cut chances, Power sending one superb cross in from the right that no one could convert, and Darikwa putting the ball straight in to Bouzanis's hands from a good position after beating Beautyman on the right.

Referee James Bell blew the final whistle before Wigan could take one last corner, and in front of the U's fans Craig Eastmond opened the shootout convincingly before Bouzanis dived to his right to save from Power. Jones then kept out Beautyman's effort allowing Graham Shinnie to level things up, after which neither keeper got close to anything, Rob Milsom, Ben Goodliffe, Richie Bennett, Enzio Boldewijn and Bouzanis all taking impressive penalties for U's matched by Will Keane, McClean, Magennis, Gwion Edwards and McGrath. John made no mistake either from U's eighth penalty, but Bouzanis again went to his right to deny Darikwa, sparking wild celebrations behind him as U's players sprinted from the halfway line to join in the celebrations. U's are going to Wembley! 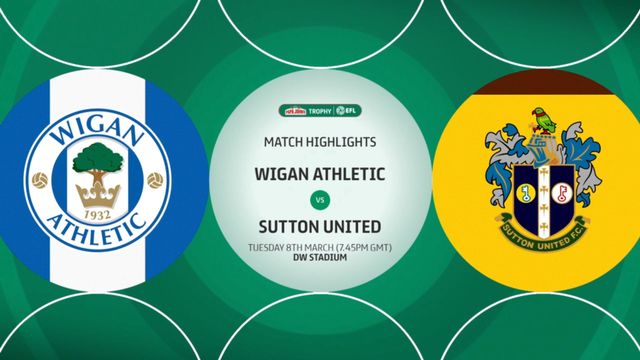 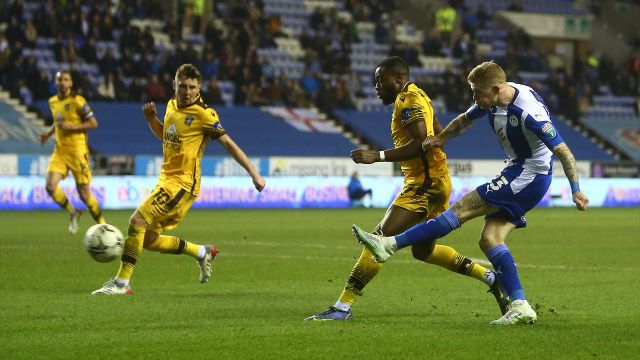