After FA Cup success at the weekend, Sutton will be bidding to progress in another cup competition on Tuesday when the group stage of the Papa John's Trophy finishes with a home game against neighbours AFC Wimbledon.

The sides' last cup meeting was a memorable one, Sutton winning an FA Cup third round replay at Kingsmeadow 3-1 to set up a fourth round tie against Leeds in 2017, and while tonight's tie may not be quite as high profile there is still plenty riding on it, with both sides hoping to make it through to the knockout stages from a group in which any of the four teams could still qualify.

For Sutton it's fairly simple - win or draw and U's go through as group winners, guaranteeing a home tie in the first knockout round, and leaving the other three teams competing for runners' up spot, although Portsmouth need Sutton to win to have any chance of qualifying.

For Wimbledon, a victory would leave them well placed to go through, as Crystal Palace would then need to record a bigger win at Portsmouth than Wimbledon achieve at the VBS, but Dons still need to win by a margin of more than two goals to finish above Sutton. The first criteria should sides finish level on points is goal difference, followed in order by goals scored, then number of wins in normal time, then the head to head record.

The draw for the first knockout round will be live on Sky Sports on Saturday after the televised game between Port Vale and Bradford City, which kicks off at 12 noon.

Should tonight's game be drawn, each side receives a point but there will also be a penalty shootout, the winners of which then take an extra point.

Sutton manager Matt Gray is likely to include a number of players who have missed the last few games, while Wimbledon, who beat Portsmouth 5-3 before losing to Crystal Palace Under 21s 2-0, have indicated that they will field a mixture of youth and experience.

Tickets are available on line here for Sutton supporters, and will also be sold from the ticket kiosk next to the club shop before the game this evening, when it is also possible to buy tickets for the forthcoming away games at Tranmere and Leyton Orient. If you are intending to buy on the night, please allow plenty of time to avoid congestion around the ticket office and turnstiles prior to kick off. Please note that tickets for the Wimbledon end have sold out, but we still have tickets available for home supporters both on line and in person tonight.

As it is a Papa John's Trophy game it will be live streamed, and passes, price £10,can be bought here.

Prior to the game, ahead of Remembrance weekend,  there will be a brief service to remember those who have given their lives in conflicts over the years.

Sutton completed the perfect qualifying campaign in the Papa John's Trophy, but Wimbledon failed to progress after Portsmouth's injury time third goal against Crystal Palace put them through on goals scored in the group games.

Any doubt concerning U's participation in the knockout stages was soon removed as Portsmouth took control at Fratton Park in a game Palace had to win for Sutton not to go through, but U's still produced a performance that deserved more than a one goal margin of victory, and to finish top of a group that included two League One sides, with a 100% record and no goals conceded, is a considerable achievement and allows U's to look forward to a home tie in the first round later this month.

Manager Matt Gray made six changes to the starting line-up in the FA Cup at Hayes, one enforced with Omar Bugiel now away on World Cup duty with Lebanon, but was still able to field a side that supporters would be quite happy to see take the field in a League Two game, with Kenny Davis captaining the side on his first appearance since the draw at Scunthorpe in August, while Ricky Korboa started for the first time since the last Papa John's game at Portsmouth and Richie Bennett returned after his suspension.

Bennett was prominent early on, winning some good aerial challenges, and he might have scored had Ali Smith not headed Enzio Boldewijn's cross wide when Bennett was waiting unmarked behind him. There were also some impressive moments from Korboa, who ran on to one fine pass from Ben Wyatt and fired in a cross that was glanced wide by Donovan Wilson, and he also tested former Sutton goalkeeper Nik Tzanev with a shot which Tzanev held at the second attempt. Wimbledon, who knew that victory would put them in a strong position to qualify, struggled to test Brad House, with Ethan Chislett and Luke McCormick sending shots too high, and as the half progressed it was U's who dominated, and Tzanev reminded U's supporters of his quality with a brilliant save to tip over Bennett's powerful diving header from Boldewijn's cross after a good Sutton move. There was little Tzanev could do soon afterwards, though, when Ali Smith's low shot from the edge of the penalty area came back off the post, another former U, Darius Charles, heading the rebound back in to the arms of his grateful keeper.

Wimbledon had been keen to try and play out from the back when Tzanev was in possession, without ever looking entirely comfortable, and it was no surprise when one such attempt came to grief, Tzanev's chipped clearance intercepted by Boldewijn's header to put Wilson in on the right to flash a shot across goal. If U's had been unlucky to that point, Wilson should have scored soon afterwards when Huseyn Biler's poor header from a Joe Kizzi cross landed at his feet but he volleyed badly over from just inside the penalty area. Within two minutes of the start of the second half, though, Wilson had his goal as Bennett flicked Kizzi's throw in to his path, and he held off Charles before burying a low shot in the corner of Tzanev's net.

With Portsmouth two up against Palace, Wimbledon's qualification was now under threat as their goal difference advantage was reduced to one, with the slightly odd situation that if Sutton scored again, Dons would still be above Portsmouth having won the game between the sides in September, while if Portsmouth scored again they would go above Wimbledon on goals scored. At first the former of those seemed perfectly likely, Korboa enjoying a terrific half on the left for U's, with one low cross was scooped away in the six yard box by Nesta Guinness-Walker. Tzanev then came to his side's rescue again, keeping out Tobi Sho-Silva's close range far post header after more good work by Korboa, who also floated in a cross from which Sho-Silva's header diverted off Guinness-Walker in to Tzanev's hands.

With Ollie Palmer now added to Dons' attack U's came under late pressure as Wimbledon looked for the goal that would protect them against any late drama at Fratton Park, but Jack Rudoni's low cross just evaded Aaron Cosgrave in the six yard box, and, with U's determined to protect the lead and the clean sheet, Wyatt threw himself in the way of a McCormick shot and Ben Goodliffe did the same to deny Palmer. Those interventions didn't just ensure that U's finished top of the group, they also kept the door open for Portsmouth, who then went through it thanks to George Hirst's injury time strike. 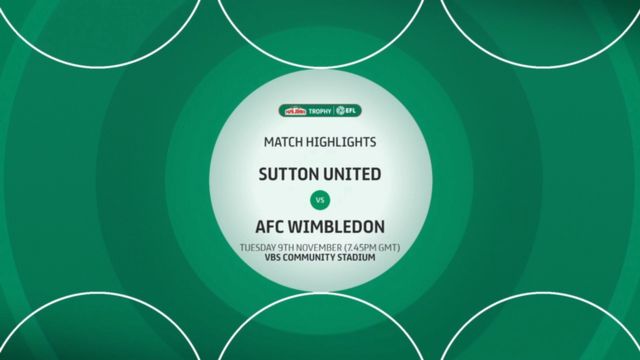 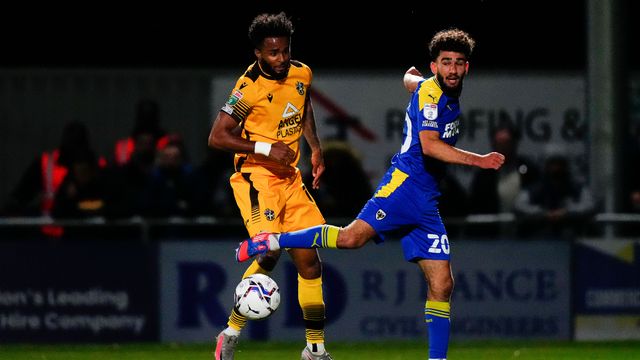