After suffering back to back league defeats for the first time in almost exactly two years, Sutton will hope for better fortunes at the JobServe Community Stadium on Tuesday away to Colchester United, a game rearranged from early September and the two sides' game in hand over the rest of the division. Sutton will wear amber for this game.

When the sides last met, Colchester were playing at their old Layer Road ground and it was a game that few who were there will forget, as Sutton recorded a thrilling 4-3 victory in the FA Cup, racing in to a two goal lead, being pegged back to 2-2, then going 3-2 up with six minutes to go only for Colchester to equalise again. Ollie Morah's last minute goal tipped the tie decisively Sutton's way to earn a second round tie at Torquay, which was also won before an unlucky defeat at Notts County in the third round.

The sides have met in league competition in one season, Colchester relegated to the GM Vauxhall Conference, as the National League was then titled, for the 1990-91 season and doing a 1-0 double over Sutton, the game at Colchester seeing Tony Rains keep goal for virtually the whole game after injury to Nick Sullivan. Sutton did win 2-0, though, on the way to lifting the Bob Lord Trophy.

Since those days Colchester, also known as the U's, have moved to their new ground right by the A12, and for a while last season it looked as though they were flirting with a return to the National League before they ultimately finished six points clear of relegated Essex rivals Southend. They go in to Tuesday's game in 19th place, with one win in their last seven games, against Harrogate ten days ago which was their only home league win to date. They are also the division's lowest scorers with nine goals in their twelve games to date.

Despite the disappointments of the past week, U's would still move up to sixth place with a victory, and could also finish the night with a place in the knockout stages of the Papa John's Trophy confirmed should Crystal Palace fail to beat AFC Wimbledon at Plough Lane. Richie Bennett begins his three match suspension after his red card on Saturday, but Craig Eastmond and Kenny Davis have both trained and could come in to contention for the game, and Louis John's injury which forced him off on Saturday is not thought to be serious.

Manager Matt Gray is expecting a tough task on Tuesday, saying: ''Colchester have got some good, experienced players in their squad and we're not expecting anything other than a very tough game again - there are no easy games in this division.'' Matt also paid tribute to the U's supporters who travelled to Rochdale on Saturday. ''To have over 100 of our supporters there in such good voice was really appreciated by the players, and we hope to hear you all again at Colchester on Tuesday.''

If you are unable to attend, you should decline the ticket offer sent to you and then email ticketing@colchesterunited.net to confirm that you require a refund.

If you have not got a ticket for the original date and want to go to the game, tickets are available on line through Colchester United's ticketing system here and can be bought through that system until half time on Tuesday. Ticket prices are £20 for adults, £15 for concessions (65+/Forces/NHS) and £11.50 for Under 18s, although on the day prices rise to £22, £17 and £13.50 respectively. Unlike for the original game, it is also possible to buy tickets at the ground on the night from the self service ticket machine in the club shop. Card payments only - indeed the whole ground at Colchester is cashless.

Colchester's ground is adjacent to the A12 and to access the stadium from the south, turn off at Junction 28, turning right at the first roundabout. Go across the bridge and then go straight over the second roundabout, before turning right into United Way from the third roundabout.

If travelling by train there is a frequent service from Liverpool Street to Colchester, taking between 45 minutes and an hour, and you should either get a taxi to the ground or buses 2, 8 or 65 will drop you within a ten minute walk of the ground. The last train back from Colchester is at 23.03.

The game will be live streamed in the UK through our iFollow service and you can buy a pass for £10 here. Single match audio passes are not available for this game, but should you not be in a position to watch the game but still want to listen, buy a monthly (£4.49) or seasonal(£45) audio pass which will entitle you to listen to this game and all others within the period of the pass.

Sutton shrugged off Saturday's last minute defeat at Rochdale, and the concession of an early goal here, to move up to sixth place in SkyBet League Two.

When Freddie Sears produced a smart turn and shot in only the second minute, U's supporters might have feared a hangover from Saturday's late hammer blow, but most if not all of them will have realised by now that their team are made of sterner stuff, and having equalised within ten minutes, U's went on to claim a victory which, if not always comfortable even after having gone 3-1 up, was deserved.

The start was hardly ideal, though, as League Two's lowest scorers took their season's total in to double figures with less than two minutes gone, Sears collecting a cross from Charlie Daniels and, despite being surrounded by four Sutton defenders, managing to turn and shoot low in to the corner of the net, but Sutton's response was immediate, Ajiboye finishing a typically incisive run with a low shot well saved by goalkeeper, and the leveller was not long in coming. Rob Milsom sent in a deep cross from the left and Ajiboye came in at the far post to get ahead of Daniels and volley home.

Colchester might have retaken the lead when Dean Bouzanis failed to gather a free kick from the left and in the ensuing scramble Samson Tovide had one shot blocked and a second deflected wide, but the 17-year-old striker's involvement would soon end as, at the other end of the pitch, George dropped Enzio Boldewijn's left wing corner and Isaac Olaofe stabbed the ball goalwards, only to be denied as Tovide diverted the effort on to the post with his hand. The distraught Tovide was sent off by referee Robert Madley, and Milsom (above), assuming penalty duties as well as the captain's armband, coolly rolled the ball in to the corner of the net.

Omar Bugiel almost widened the lead just before half time with a low shot from twenty yards that grazed the side netting, but in the second half there was an early scare as Sears was tripped on the edge of the penalty area by Goodliffe as he tried to collect a pass over the top from Cole Skuse. Colchester were hopeful of a penalty and a red card, but the incident was just outside the area, and with the ball closer to Bouzanis than Sears when the striker went over Goodliffe was booked. Sears' free kick deflected off the wall and then Luke Hannant to loop harmlessly over the bar.

Six minutes later the game swung further in U's favour after a decisive passage of play. A mistake by Ali Smith allowed Sears to go through, but he was denied by a brilliant covering tackle from Coby Rowe, and as U's cleared the ball Olaofe first won a tackle just inside the Colchester half and was then upended by Skuse as he tried to run at the home defence. Milsom's inswinging free kick was met by Goodliffe's head, and the ball found the net through the hands of George.

The last half hour wasn't always as comfortable as it might have been for U's, who squandered several good opeings with a wrong choice or misplaced pass, and with Noah Chilvers impressive for Colchester the home side came close to setting up a tense finish. Chilvers ended one fine run with a shot just wide, then Sears netted after Bouzanis had beaten out a fearsome free kick from Daniels, only to be ruled offside. If Colchester had a feeling that it wasn't to be their night, it would only have been enhanced when Tommy Smith's glancing header from a Daniels cross came back off the post, but the almost 300 Sutton supporters who had followed their team along the A12 were delighted to see U's move back in to the play-off positions with a third away league win in four games, with the return of Kenny Davis in the last five minutes for his first action since the away draw at Scunthorpe a further positive moment. 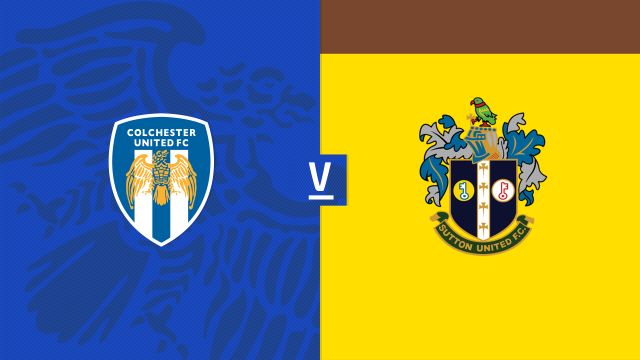 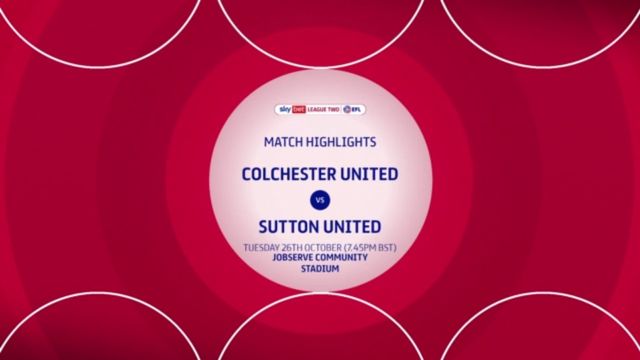 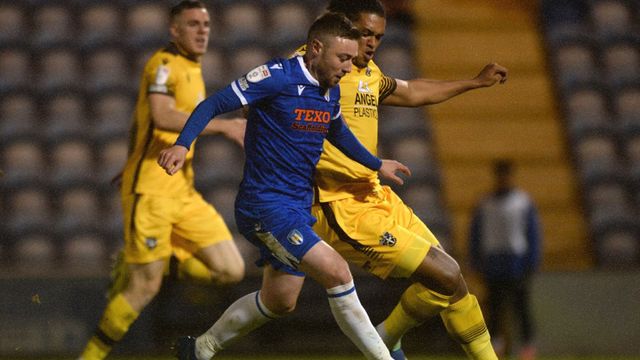