After the desperate disappointment of the stoppage time defeat at Doncaster on Saturday, Sutton attentions turn to the Carabao Cup on Tuesday night with a visit to MK Dons. U's will be wearing all black for the game.

While Sutton ended last season with a near miss, just missing out on the League Two play-offs, MK also came close to promotion, reaching the end of season competition in League One before being beaten in the semi finals by Wycombe after being in or around the top three for most of the season.

Several of that squad moved on during the summer, Scott Twine and Harry Darling moving up to the Championship with Burnley and Swansea respectively, while Troy Parrott, who was on loan from Tottenham and scored in the play-off semi final, is now also in the Championship with Preston. However goalkeeper Jamie Cumming has returned from Chelsea for a second loan spell and other summer signings include experienced midfielder Bradley Johnson and strikers Louie Barry, on loan from Aston Villa, and Matthew Dennis from Norwich after he was on loan at Southend last season. They also have Northern Ireland striker Will Grigg, although he was injured in Saturday's 1-0 home defeat by Sheffield Wednesday, a result that left MK still looking for their first point, and goal, of the season after the lost by the same score at Cambridge on the opening day.

Sutton are also looking for a first win, which seemed set to come at Doncaster until the stoppage time drama, and manager Matt Gray reports no new injury concerns after Saturday's game, with Will Randall close to being in contention for a return after his injury against Newport, but Ben Goodliffe still sidelined.

For those unable to get to the game we will have audio commentary on our iFollow service from Stadium MK, and you can buy a match pass for £2.50 here, as well as monthly and seasonal audio passes at £4.49 and £45 respectively. Please note that Carabao Cup games are not able to be live streamed at home or abroad, and so the only coverage tomorrow wherever supporters are in the world will be the audio commentary.

Last season saw both teams make their exit from the competition at this stage, Sutton's Carabao Cup debut ending in a narrow defeat at Cardiff while MK lost 5-0 at eventual Championship runners-up Bournemouth.

The game will be decided on penalties if it is level after 90 minutes, and referee Charles Breakspear, a familiar face to Sutton supporters since the Ryman League days of 2009 and in his tenth season as an EFL referee, achieves an unusual feat of refereeing two different games in the same round of the competition having also taken charge of Cambridge's win against Millwall last week.

The draw for round 2 is after Wednesday's game between Sheffield Wednesday and Sunderland, and the second round is scheduled for the week of 22 August.

Ticket prices are: £12 for adults, £9 for over 65s, £6 for Under 25s, £3 Under 18s and £1.50 for Under 12s (maximum of three per paying adult) and tickets are on sale on the night. Our accommodation is in the North Lower Stand.
Travel: The Supporters' Coach leaves at 3.15pm, fare £20 return.  Contact John Parsons by email johnparsons092@gmail.com or text 07989 261929 (please confirm your name) to reserve a seat.
By car: Leave the M1 at junction 13 and follow the A421 towards Milton Keynes and Buckingham, and stay on the A421 until the Bleak Hall roundabout. Then turn left in to Grafton Street (V6) and follow the signs to the stadium. Parking on Tuesday is free. Please make sure not to park in Asda, or the MK1 shopping centre.
By rail: Milton Keynes Central station is actually about an hour's walk from the ground (Arriva Service 1 is a bus route linking the station to the ground), with Bletchley being closer at about half an hour away. The stadium is signposted from the station. There is a frequent service from Euston, taking between half an hour and an hour. Return trains at 22.10 and 22.29 then not until 23.18. A closer station is Fenny Stratford, about a 20 minute walk, again signposted, and reached by changing at Bletchley, but there are far fewer trains on the outward journey and no practical return train. Go to www.nationalrail.co.uk for further details.

Sutton went out of the Carabao Cup at the first round stage after Conor Grant's goal four minutes before half time separated the sides. In a game that rarely got in to top gear, the home side dominated possession but found it hard to break down the U's defence and more often than not were reduced to shots from outside the penalty area that didn't trouble Jack Rose, while Us had chances in both halves, the best coming with the last kick of the game when substitute Luke Gambin volleyed over from Rob Milsom's cross.

U's were unchanged from the starting line-up at Doncaster, while MK made seven changes from the side beaten by Sheffield Wednesday at the weekend, but centre backs Jack Tucker and Warren O'Hora, along with goalkeeper Jamie Cumming, were retained and the three spent a lot of time in possession as the home side opted to play out from the back whenever possible. Although there was more space for the MK midfield than U's would have liked it was still a challenge to break through U's defence, with Dawson Devoy and Darragh Burns sending harmless shots from range, and when there was a closer opportunity Milsom blocked superbly from Matt Dennis. It was at the other end that the best chance came, Enzio Boldewijn bringing down a cross from the left and stepping inside a defender, but then shooting against Tucker.

When a similar chance came at the other end it proved decisive as Devoy slipped a pass to Conor Grant, who sidestepped Milsom and drilled a shot across Rose in to the net, and there was another blow before the break for U's as Coby Rowe limped off, Joe Kizzi moving in to central defence as Jon Barden came on.

MK could have doubled their lead early in the second half when Burns looped a header just wide from Henry Lawrence's cross, but as in the first half they were otherwise restricted to long range efforts, and when substitute Louie Barry did work an opening on the right of the penalty area he shot too close to Rose.

Sutton had a good spell midway through the half as Ali Smith's low shot was pushed away by Cumming, and Kizzi sent a low volley wide, while there were two penalty shouts as substitute Kylian Kouassi went over as he tried to turn on to a long throw, and Harry Beautyman claimed for handball as his low shot was blocked by O'Hora. The big chance, though, came right at the end when Kouassi and Josh Neufville combined to release the overlapping Milsom, and his cross fell invitingly for substitute Gambin, who wasted the chance to make his competitive debut a memorable one as his first time volley flew over the bar. 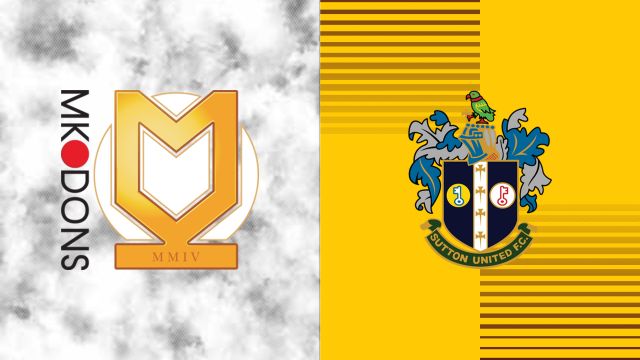 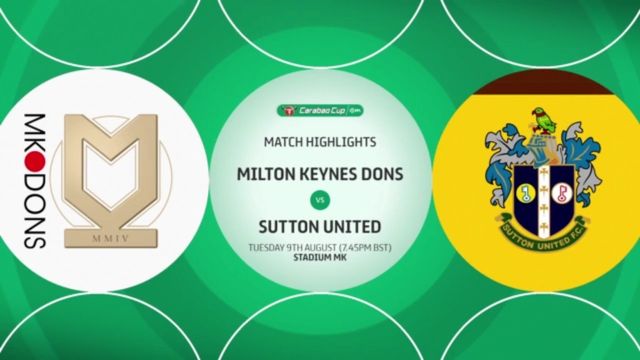 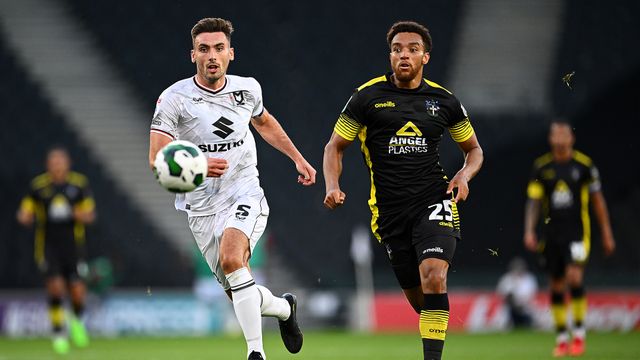