Sutton make a first league visit to Gillingham this Saturday, the third of the four clubs relegated from League One last season that U's have travelled to, with a game away to the fourth, AFC Wimbledon, a fortnight away. U's will be wearing amber at Gillingham.

Trips to Doncaster and Crewe in August yielded narrow defeats, the Doncaster game especially painful for U's who led going in to stoppage time, so Sutton will be hoping for an improvement in fortunes against a side who finished in the highest of the League One relegation positions, losing their status only on goal difference behind Fleetwood, but who have made the poorest start of the four this season.

Gillingham go into the game in 20th place, with their only victory in ten games so far against Rochdale, and that 1-0 win was one of only two games in which they have scored, the other being a 1-1 draw at Grimsby. Their other home games have seen goalless draws against Swindon and Walsall, and 2-0 defeats against Mansfield and Harrogate.

Sutton suffered a rare home defeat last week against Salford, the game turning on the dismissal of striker Donovan Wilson, and he will miss the visit to the Priestfield Stadium as he begins a three match suspension, while Rob Milsom, Sam Hart and Tope Fadahunsi are nearing fitness but unlikely to feature on Saturday. There is better news of Will Randall, who was substituted as a precaution at half time against Salford after a slight muscle injury but who could be involved at Gillingham.

Saturday's referee is a familiar face to Sutton supporters, David Rock having officiated in numerous U's games in the past and now in his fourth season on the Football League list.

Supporters are reminded that there is no pay on the day admission, and that all tickets must be bought online here. Our supporters will be in the upper section of the uncovered Brian Moore Stand. The Priestfield Stadium is a cashless stadium.

There are no trains through Gillingham on Saturday due to the rail strike, but there are still seats available on the Supporters' Club coach which departs the VBS at 11.15, fare £15 return. For more detailed ticket and travel information click here. 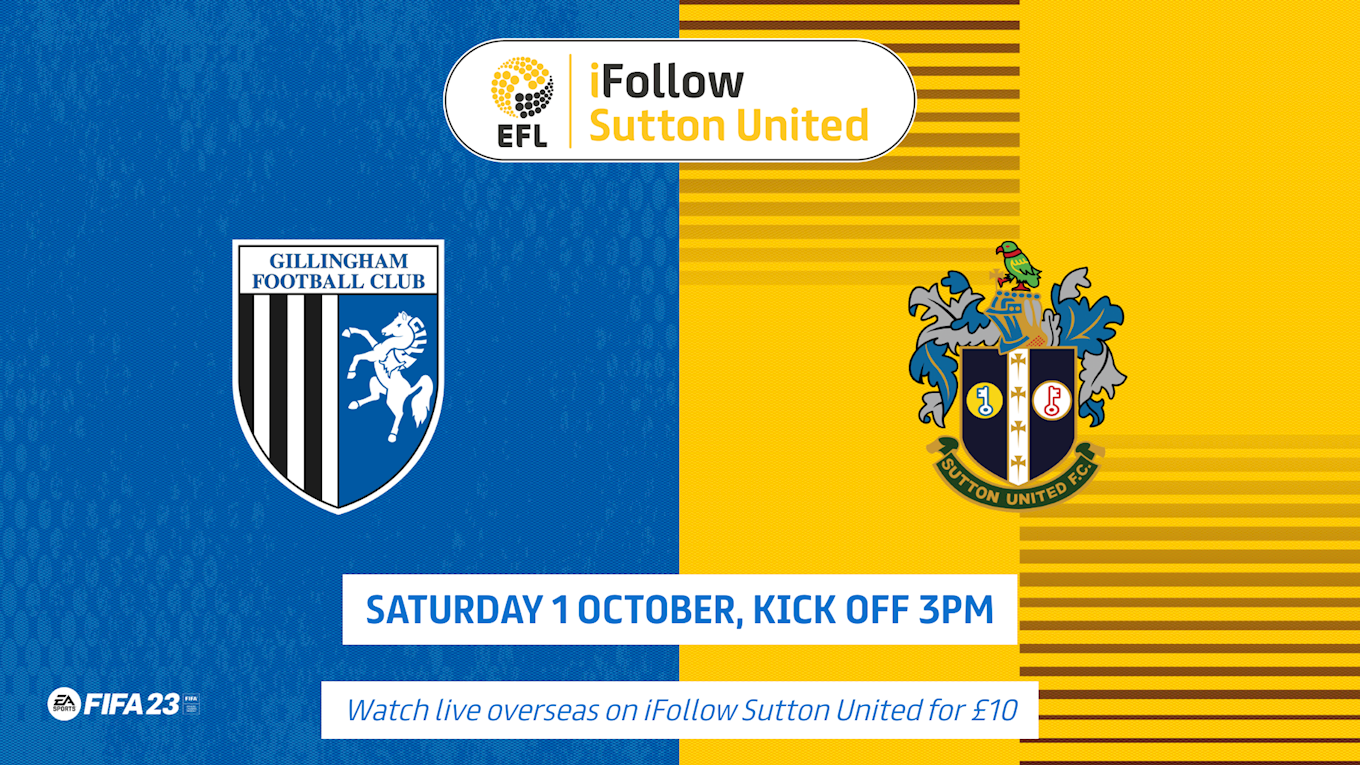 As usual there will be an audio commentary from Gillingham on our iFollow service for UK subscribers, price £2.50 with monthly passes (£4.49) and season passes (£45) available. Overseas supporters can watch the action from the Priestfield for just £10, or buy a monthly pass for £25 or a seasonal pass for £170, giving access to every Sutton League Two and Papa Johns Trophy game this season.

For the third league game this season Sutton conceded in stoppage time to this time hand Gillingham their second league win of the season. A poor game that had been heading for the goalless draw that would have been a fitting outcome swung Gillingham's way just after the reserve official had held up the board indicating five additional minutes, as Craig Eastmond's mistake in midfield allowed Shaun Williams to set Alex MacDonald through the middle, and the midfielder who had come on as a half time substitute set up the chance for Scott Kashket to fire in a shot, and then continued his run to head the rebound in to the net after Lewis Ward had beaten Kashket's effort out.

There was still time for Sutton to fashion a glorious chance of an equaliser as Joe Kizzi's header fell for Josh Neufville on the corner of the six yard box but his shot flashed across goal and with it went U's hopes of a point.

A game between a side with only two goals in the league so far, and one which has on more than one occasion bemoaned missed opportunities was never likely to be a goalfest, and for long periods that view was borne out as both sides saw promising moves ended by an errant pass or unnecessary foul. Neufville did fire in an early shot for U's which was pushed out by Glenn Morris and cleared, but Sutton will be disappointed not to have put a defence that at times looked uncertain under more pressure and heightened the sense of anxiety that could be felt in the stands.

Those home supporters, having seen only one Gillingham goal on the ground all season, were even more frustrated as their side found the net three times in the first half only to see all the efforts ruled out, Kashket clearly offside on the first occasion before he shot past Ward, but the victim of a much more marginal decision when Will Wright's quick free kick released him on the left and his low cross was turned in by Mikael Mandron. Between those, Ryan Law shot home but Mandron had been penalised, possibly slightly harshly, for dangerous play as he tried to volley the ball goalwards under pressure from Neufville.

The quality failed to improve greatly after the break, with Neufville beating Law on the outside and seeing his cross diverted behind by Max Ehmer, and Gillingham's finishing deserting them as Kashket, the liveliest striker on the pitch, had a shot deflected wide while Hakeeb Adelakun was well off target with an effort from outside the penalty area.

It was in the last ten minutes that chances came more frequently, with Omar Bugiel's header from Joe Kizzi's cross looping inches wide off Wright, but the home side now pressing for the winner. Ward made a good stop with his legs to keep out a Wright shot that came through a crowd of players and also used his legs to clear a low Adelakun shot from the narrowest of angles, while substitute Lewis Walker sent a shot wide on the turn. Given great backing by the home support, though, they were rewarded when Eastmond's miskick allowed Williams the chance to start the move that would end with MacDonald heading in, and when Neufville shot wide from U's best chance. 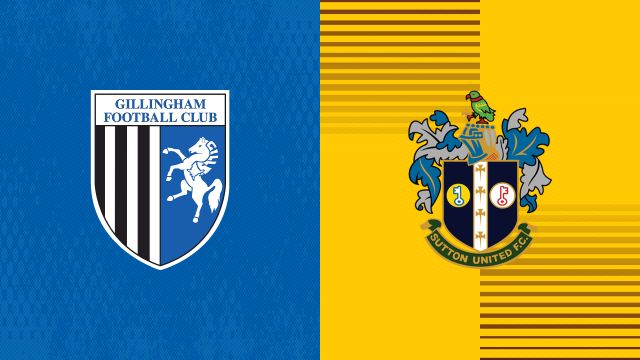 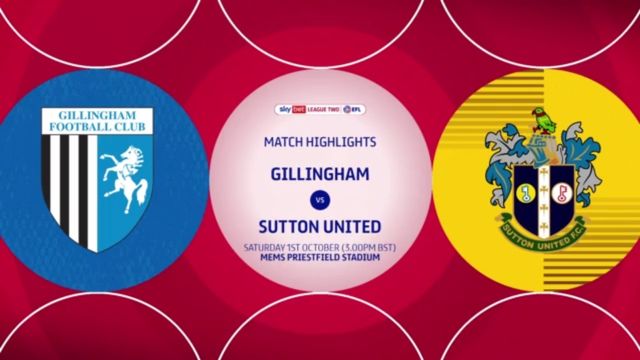 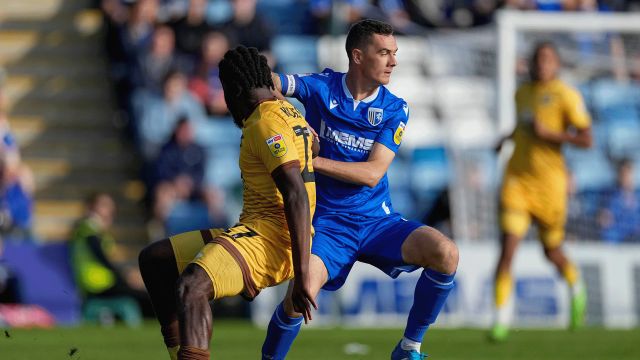