THE MATCHDAY EXPERIENCE at the VBS Community Stadium will be different in many ways from what we were all used to as a National League club.

Let’s start at the beginning with ticketing.

Even before arriving at the stadium you will notice things are different. Everyone will need a bar-coded match ticket.  Season-ticket holders will have a bar-code on their new-style ticket, similar to a credit card, which will be valid for single person entry to every league game.  For those buying on a match-by-match basis we strongly advise buying tickets in advance through our website.  Once a ticket has been used the code will no longer be valid, so multiple entry from the same ticket or from copies of that ticket will not be possible.  If buying a ticket online in advance, you may either print out that ticket or keep it on your phone or other IT device: it is YOUR responsibility to present a valid bar-coded ticket at the turnstiles.

Everyone MUST obtain a matchday admission ticket in advance to gain entry to the game through the turnstiles. Payment at the turnstiles is no longer permitted or possible.

Home Terrace Tickets will be available to buy from the club ticket booth in the car-park on matchdays, subject to availability, but we strongly urge everyone to buy your ticket in advance of matchday HERE to avoid congestion and time-consuming queues, to greatly facilitate admission to matches and to guarantee entry.

Please note - grandstand seats must be purchased in advance HERE. Only General Admission home terrace tickets can be bought on matchday from the club shop, subject to availability.

Away supporters are advised that they are not allowed to purchase tickets for the Home end; away supporters discovered to be in the Home end may be ejected from the stadium and will not be entitled to a refund.

Away supporters have access to standing and seated areas (seats must be bought in advance) and also have dedicated refreshment and toilet facilities.

We are expecting increased attendances this season so please  do try and enter the stadium on matchday in plenty of time by having your season ticket or matchday ticket ready to be scanned at either the Gander Green Lane turnstile or, if your favoured spot to watch matches is on the terraces opposite the main stand, please enter via our new turnstiles behind Rose’s. These entrances are accessed via the path leading to Collingwood Rec from Gander Green Lane, fifty yards down from the main entrance. Using these turnstiles will spread the load and greatly facilitate admission on matchdays for home fans

Now that you know what to do on matchdays, all that’s left is deciding how to travel to the VBS Community Stadium.  We strongly recommend using public transport, and suggest that away supporters use Sutton station, which is about 20 minutes’ walk away. The Old Bank, near to the station, will offer a warm welcome to visiting fans looking for pre-match refreshment.  Two buses between Morden and Sutton stations run conveniently close to our stadium: route 413 bus goes down Gander Green Lane, and number 80 runs along Collingwood Road, closer to the visitors' area of the ground.

All spectators are asked to note that anyone under the influence of alcohol will be refused admission to our stadium.

Because of the additional facilities that we now require, there is less room in our car park.  We are hoping to develop additional parking behind the goal at the Collingwood Road end but until that is available parking will be strictly limited to permit holders.  We would recommend travelling to the game by public transport, observing applicable Covid precautions, and ask that spectators that need to drive use the municipal car-park in Gibson Road or make use of the Just Park website, there are a number of spaces usually available within minutes of the stadium.   Before games, we would like to ask permit holders to arrive at least half an hour before kick-off to minimise interaction with spectators arriving on foot; you may be held briefly at the entrance to allow queues to clear. After matches finish, cars in our own car park will be held back for at least 15 minutes to allow pedestrian spectators safe egress. So, if you need a quick get away it may be better to consider alternative parking arrangements.

On arrival, please note that because all games will be segregated home supporters cannot use the entrance in the north-east corner of the stadium from the Recreation Ground.  This will be dedicated to away supporters.  To cope with the expected increase in spectator numbers we have created a brand new entrance with four turnstiles, for the home end only, leading from the Recreation Ground and located behind the old Shoebox.  The main entrance at Gander Green Lane also has four brand new turnstiles.  We would like to ask home supporters to get used to using either entrance in order to speed up admission and to co-operate with stewards if asked to use an alternative entrance. Spectators in wheelchairs can be admitted via the side gate by the main Gander Green Lane entrance.

As mentioned above, it will not be possible to pay for stand entry once inside the stadium – seating tickets must be purchased in advance.  Spectators with standing tickets for the home end may stand anywhere on the stepped terraces although we would ask people to spread out and not congregate in one area. If any area of terracing exceeds its notional capacity then stewards will ask spectators to move.  Standing behind the goal on flat ground is not permitted in the EFL, spectators must stand on the stepped terrace behind the crush barriers.  Standing next to the fence along the long touchlines is permitted at the club’s discretion but only in limited numbers and no more than two people deep,  and stewards will ask spectators to move back behind the barriers if our Ground Safety Officer considers that areas are becoming overcrowded or that sightlines from the terraces are being obstructed. There is absolutely no standing allowed in front of the wheelchair platform. We would therefore ask all spectators to get used to standing behind the crush barriers please.

Once inside the stadium regulars will notice a few changes. We have a new pitch and new floodlights of course, and additional cctv cameras to ensure there are no blind-spots, and within a few weeks there will be a new permanent seated stand at the Collingwood Road end for away spectators. Until then visiting fans will have use of a temporary stand in the north-east corner. There are new toilet facilities in that part of the ground exclusively for away supporters.

The much-loved Shoebox has gone and in its place there is currently a covered viewing platform for wheelchair users and any necessary carers. This platform has limited capacity so we recommend booking in advance if you need this facility; you can contact us by phone (0208 644 4440) or email (info@suttonunited.net) There are toilets behind the mound stand and this area now includes a dedicated accessible WC (operated by radar key).  There is also an accessible WC under the main grandstand for people using the club’s bars.  The toilets that were alongside the grandstand by the entrance from the car park can now be found at the Gander Green Lane end, where the club shop used to be.  The club shop is now in the car-park and will be open during the week as well as on match days.

Inside the club building little has changed.  The away team does now have direct access to their changing room from the car-park, but the turnstile alongside the grandstand has been removed and been replaced by an emergency exit. Our first aid room, which will again be operated for us by St John Ambulance, has been refurbished and equipped in line with improved standards.

Although there has been a general removal of regulations in society in general, there are still some protocols that we must follow as a football club.

The players and other football personnel are restricted to a Red Zone, this is essentially one end of the car-park; the pitch; the dressing rooms area and part of the east wing of the main grandstand where a temporary barrier has been created around a small number of seats to create an area socially distanced from spectators.  Spectators are asked not to mingle with Red Zone personnel at any time; before, during or after the game.

Although the wearing of face coverings is no longer mandatory, we would ask all spectators to observe good practice in relation to minimising the spread of Covid-19 and we would ask you to read our Covid Spectator Charter before attending matches. 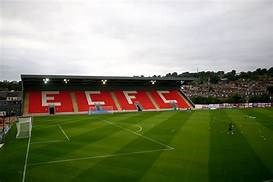 
Following the appearance of Craig Dundas on Saturday for his Football League debut at the age of 40, there was some discussion about whether he may be the oldest player ever to make a debut in the...