Here's all you need to know about Sunday's Papa Johns Trophy final against Rotherham United at Wembley as U's make a first visit to the National Stadium since 1981, with information for before, during and after the game. Should anyone have any doubt, we will be wearing amber.

TICKETS
We have so far sold just under 14,000 tickets for Sunday's big day at Wembley, but there are still plenty left so encourage your friends and families to come along and see if we can turn the east end of Wembley in to a sea of amber and chocolate.

Tickets can be bought on line until 7am on Sunday morning to be collected from the East Ticket Office at Wembley. Directions are below. You will need to give your name and booking reference, and provide photographic ID. You can find all details of pricing and how to buy tickets on line here.

After 7am on Sunday morning tickets are no longer available on line, but from 11am can be bought in person from the East Ticket Office, subject to availability in the blocks opened for Sutton supporters.

DIRECTIONS TO EAST TICKET OFFICE: The Sutton United ticket window is located in the East ticket office on the Mezzanine Level, also called B1 Level. From Wembley Park station, head down Olympic Way until you reach the Olympic steps. Go up the steps and head towards the stadium. You will then reach the Mezzanine/B1 Level. Enter through the gates under the 'Ticket Office/Wembley Store' banner, and the ticket office is located just inside these gates on the right.
SUPPORTERS' COACH TRAVEL

All the Supporters' Club coaches are now fully booked with parking in the Green area at Wembley stadium coach parking.
Please note the following instructions from Wembley Stadium. NO ALCOHOL is allowed on ANY coaches. Coaches will be subject to random mandatory security prior to entry to the parking area..
Coaches are due to arrive at the car park at the ground for 10.00am  and will be numbered accordingly. Please make sure you are on the coach number that you were allocated when booking, and please do not board until checked in by the person who is charge of the coach. Our aim with the above procedure is to leave no later than 10.30am.

Please note that there will be no general parking for supporters at the club on 2nd/3rd April. Any disabled fans travelling on the supporters' coaches who need a parking spot should email info@suttonunited.net. Stewards will only admit drivers named on their list.

Our thanks to Bruton's Coaches who are providing our coaches.


FOR INDEPENDENT TRAVELLERS
Wembley Stadium is served by three stations, Wembley Park (London Underground Metropolitan and Jubilee Lines), Wembley Stadium (National Rail from Marylebone) and, slightly further away and less convenient for our East End of the ground, Wembley Central (London Overground from Euston). If travelling from Victoria change at Oxford Circus for the Bakerloo Line then Baker Street for the Metropolitan Line. The Metropolitan Line also connects with the Thameslink at Farringdon. Anyone using the Jubilee Line should change to the Metropolitan Line at Finchley Road.
Drivers should be aware that the Boat Race is on Sunday afternoon and roads around West London are likely to be very busy.


WHERE TO STOP BEFORE THE GAME

A no street-drinking zone on Olympic Way and surrounding areas will be in operation ahead of the match.

There is a wide range of bars, pubs, fan zones and restaurants available to enjoy in Brent before the game – you can find further details here, including a list of pubs and bars in the Wembley Stadium East zone which are open to Sutton supporters.

The ban on street drinking in public will be enforced by a team of officers from Brent Council, Wembley National Stadium, Wembley Park, The Metropolitan Police Service, Transport for London and the British Transport Police with fans being required to hand over their alcoholic drinks or face a £100 fine.

BUY YOUR SCARVES AND FLAGS

The Club Shop is open until 4pm on Friday and will be open on  Saturday between 10am and 4pm for the sale of scarves, flags and all the other exclusive Papa Johns Trophy final merchandise which has been officially licensed and approved by the EFL, Papa Johns and Wembley Stadium. So if you haven't bought yours yet, get down to the Club Shop before Sunday to get yourself ready for the big day.

HOW WE GOT HERE
Sutton came top of a group that included Portsmouth, AFC Wimbledon and Crystal Palace Under 21s, winning all three games without conceding a goal. In the first knock out round a goalless draw with Stevenage was followed by a penalty shootout which we won 4-3, Dean Bouzanis saving three penalties in a row. Colchester were beaten 2-1 at the VBS in the round of 16, and a Craig Eastmond goal on his 300th appearance was enough to beat Harrogate in the quarter finals. At Wigan in the semi final, after Will Randall's goal had been cancelled out by James McLean, we again prevailed in a shootout 7-6, Dean Bouzanis saving twice and also converting one of our penalties.
Rotherham, who are currently top of League One, also had a 100% record in a group that included Doncaster Rovers, Scunthorpe and Manchester City Under 21s, scoring fifteen goals and conceding one. In the first knock out round they beat Port Vale 5-3 in a shootout after a 1-1 draw, then won 4-2 at Crewe before another penalties win over Cambridge in the quarter finals, 7-6 after a 1-1 draw. Their semi final at Hartlepool also went to penalties, finishing 2-2 before Rotherham won 5-4 on penalties.
MATT'S PREVIEW
Manager Matt Gray spoke to SUFCtv to preview the game and give the latest news on who is likely to be available. Click here to watch 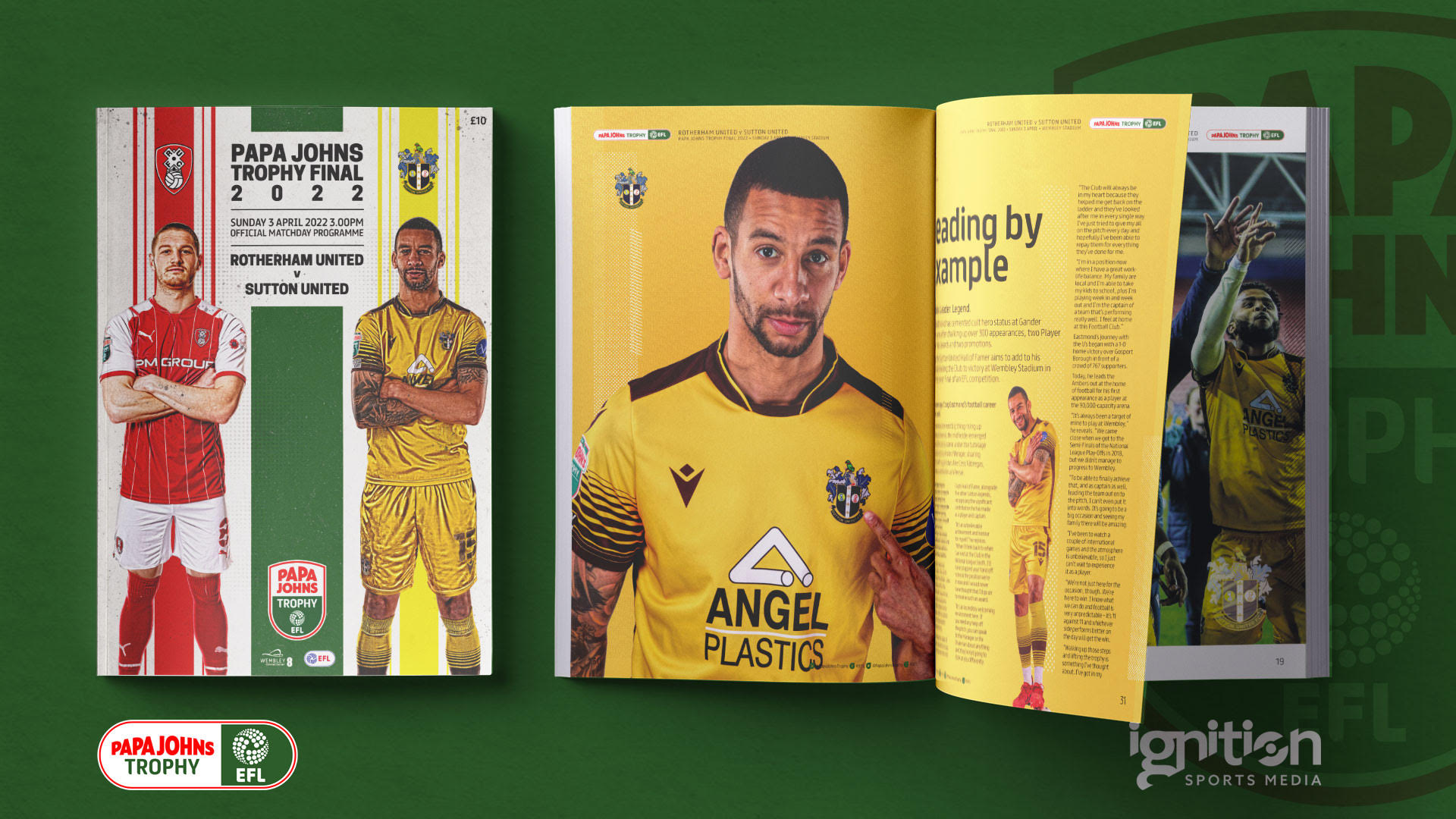 The official programme for the game, full of features and interviews, will be on sale at Wembley, price £10, but can also be ordered on line by clicking here.

HOW TO FOLLOW THE GAME IF YOU'RE NOT AT WEMBLEY

If you can't get to Wembley on Sunday here's how you can follow the game on TV and radio.

TV: The game is being shown live on Sky Sports Football with the broadcast starting at 2.30pm, with half an hour of build up including interviews with Sutton players, management, staff and supporters recorded at the club last week. The feed is being taken live by broadcasters in a number of overseas countries, including ESPN(USA, South America and Africa), beIN Sports (Australia, New Zealand and the Middle East), and various channels in Europe, although it is up to the broadcaster in that country whether to show the game live or in highlights form.

Radio: There is live free-to-air commentary on Talksport 2, with the programme on air from 2pm. BBC Radio London will also be providing extensive coverage and there will be updates on BBC Five Live, in both cases involving some familiar voices to Sutton supporters.

With the game being on Sky we cannot live stream it in the UK, or any country where the feed is being taken, through our iFollow service. The game will be available for £10 in any country with no TV agreement to broadcast the game, and you can check on this link to see if the game is available in your country. With free commentary available on Talksport 2 we will not be providing our own audio commentary through iFollow on this occasion as there would be a considerable expense to have the necessary equipment installed at Wembley, an issue we do not have for standard league games home or away, and we have been told that the sound quality and reliability of a commentary down a mobile phone line cannot be guaranteed.
RULES OF THE GAME
Unlike in all previous rounds, should the scores be level after 90 minutes there will be extra time before the game goes to penalties.
Both teams can use five substitutes from seven named, having three opportunities(excluding half time)  to make those substitutions. Should the game go to extra time a further substitution can be made.
OFFICIALS
Referee Seb Stockbridge is from Tyne and Wear and in his ninth season as an EFL referee. He has not taken charge of a Sutton game before.  His assistants are Andrew Aylott(Bedfordshire) and Lisa Rashid (West Midlands), the reserve referee is Ben Toner (Lancashire) and the reserve assistant Daniel Flynn(Bristol).