After two away trips, Sutton return to home turf this weekend on a day when the club will induct six more individuals in to the Sutton United Hall of Fame, with this year's three inductees joined by those who would have been inducted last season but for the Covid restrictions. The presentations will be made in front of the main stand about fifteen minutes before kick off. 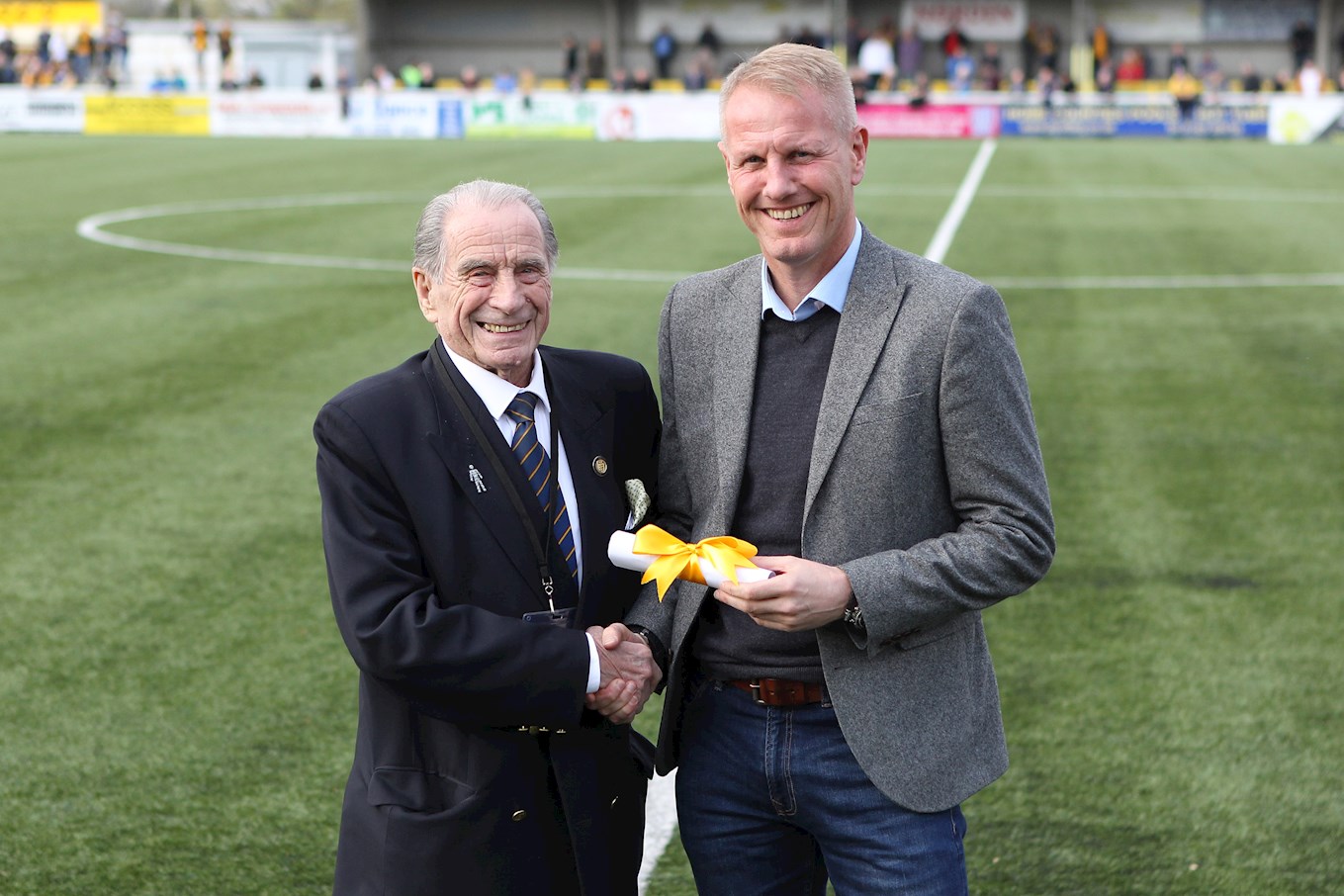 Paul Rogers receiving his certificate from  Brian Williams at the 2019 Hall of Fame presentation.

Once the action starts on the pitch, U's will face the club currently lying at the foot of League Two, with Scunthorpe, who avoided relegation by three points last season, now six points adrift of 22nd placed Oldham despite a 3-1 win at Boundary Park on Boxing Day. Since then the Iron have won only once in eleven league games, the victory coming at home to Walsall earlier this month, but they battled for a good point on Tuesday in a goalless draw with Northampton, who moved up to second in the table as a result, and U's manager Matt Gray knows that nothing can be taken for granted, saying: ''Their draw on Tuesday shows that there's not a great deal between the sides at the top and the bottom of the table, and I'm not expecting anything other than a very tough game.''

When the sides met at Glanford Park in August Jake Scrimshaw's goal early in the second half gave Scunthorpe the lead, but a late Donovan Wilson goal earned U's a point which might have been more with Wilson and Craig Eastmond both missing good chances in injury time.

Since that game manager Neil Cox has been replaced as manager by the experienced Keith Hill, who has taken charge of over 700 games in his managerial career, most of which were at Rochdale, where he spent eleven years over two spells. He will be without defender Lewis Thompson on Saturday after the defender suffered a serious injury on Tuesday, and has several other players recovering from injury or illness.

Sutton will still be without Jon Barden, Richie Bennett and Isaac Olaofe, with Matt hoping that the first two will be able to return shortly, saying: ''Richie is still recovering from his wrist operation but I would expect this to be the last game he misses, and Jon, who has an abdominal strain, may also be back for next week. Tanto was due to have a scan on his hip injury on Thursday and we'll know more after that.''

Referee tomorrow is Simon Mather, who was in charge on that memorable afternoon last May when U's clinched the National League title against Hartlepool, and has returned once since then, for the home game against Carlisle in September.

Tickets are on sale for the game on line here, and we would recommend buying them through this method before leaving for the game. If you do want to buy in person, please arrive at least an hour before kick off to avoid queues around the ticket kiosk and turnstiles prior to the game. Scunthorpe supporters wishing to buy on the day can do so from turnstiles 9 and 10 at the Collingwood end of the ground.

A programme can be ordered on line here, and this will be sent out after the game. If you can't get to the game we will have our usual audio commentary through our i-Follow service and anyone without a valid monthly or seasonal pass can buy a pass for £2.50 here.