After taking on and beating two promotion rivals over Easter, Sutton face a side desperate for points for other reasons, making the long trip north to Barrow with the home side potentially one win away from securing their League Two status. U's will be wearing black.

Victory for Barrow, coupled with Oldham losing at home to Salford, would ensure that the Cumbrian side will remain in the EFL next season, with even a draw at Boundary Park enough due to Barrow's vastly superior goal difference, and will leave them able to relax during a run in which also sees them play Exeter, Swindon and Northampton.

Barrow come in to the game after themselves having a good Easter which saw them hammer league leaders Forest Green 4-0 on Friday then come away from Salford with a good point in a 2-2 draw. The Forest Green win ended a run of ten home league games without a win, with their previous home success against Swindon in mid-December, and although Barrow have won only four times on their own ground this season, three of those successes have come against sides who have been featuring in the promotion race, with Newport beaten in September.

Sutton come in to the game after a superb Easter saw victories over Mansfield and Newport to leave U's in sixth place in the table, five points behind third placed Port Vale with a game in hand, and manager Matt Gray has Joe Kizzi and Will Randall available for selection again after they missed Monday's game through injury and illness respectively. Captain Craig Eastmond came off during the Newport game, but his injury isn't as serious as first thought and late decisions will be made on him and Harry Beautyman.

U's will be looking for a first ever win at the Dunes Hotel Stadium, with the most recent visit ending in a 1-0 defeat in November 2019 that left U's above only Chorley in the National League table, but David Ajiboye's goal (above) was the only goal of the game when the sides met at a cold and blustery VBS Community Stadium in November.

Lancashire referee Ben Toner is taking charge of his first Sutton game, although he was fourth official for the Papa Johns Trophy final earlier this month.

The Supporters' Club coach leaves at 6am, fare £50 return.

If you’re travelling by car, take the M6 to junction 36, then join the A590 for the last 30 miles or so, which may have some slow sections, to Barrow. Continue towards the town centre on Park Road and then Walney Road, still the A590. After passing the fire station take the next left in to Wilkie Road, and the ground is on the right. There is no on site car parking for spectators.

Anyone not going to the game can listen to an audio commentary through our iFollow service. A match pass costs £2.50 and can be bought here.

Sutton suffered a setback with a defeat at the Dunes Hotel Stadium, but play-off hopes are still very much in U's hands and the outcome of the game was of more immediate significance to Barrow, who completed a week of three games against promotion chasing sides with seven points and their Football League status secure after Oldham's defeat by Salford was confirmed.

In blustery conditions which hindered the game as a spectacle, the game was decided by which side used the conditions better, and having created one clear chance in the first half with the advantage of the wind, U's found themselves under pressure in the second period and Barrow had seen a couple of opportunities go begging before John Rooney's goal midway through the half put them in front. However it wasn't plain sailing for the Cumbrian team, with the aftermath of the goal seeing Josh Kay shown a second yellow card, and Paul Farman then saving a Rob Milsom penalty five minutes later. However despite ten additional minutes at the end, the majority of which caused by a stoppage which seemed to arise from an incident in the crowd, Barrow held on and U's were left with work to do to claim a play-off place, and still looking for a first win at the ground.

There was little of note in the first half, Omar Bugiel having U's best chance after 27 minutes when a long Dean Bouzanis clearance carried over the home defence and left Bugiel with just Farman to beat, but he failed to control his shot and sent the ball high over the bar. Kay picked up his first booking five minutes later for a cynical trip on David Ajiboye, but it wasn't until just before half time that Barrow threatened for the first time, Robbie Gotts having a shot deflected just wide.

It soon became clear that Barrow would be a more dangerous force with the wind behind them, and after only four minutes of the second half some patient build-up play on the right between Aaron Amadi-Holloway, Remeao Hutton and Connor Brown ended with Hutton's cross headed out by Joe Kizzi and met on the volley by Rooney, who was only denied by Ben Goodliffe's superb headed block. Barrow thought they had scored from the resulting corner, as Rooney's flag kick threatened to creep inside the near post, but Bouzanis managed to scramble the ball away under pressure from Niall Canavan and despite home appeals the officials ruled that the ball had not crossed the line.

There was another scare for U's when Kay, appreciating that he couldn't be offside from a goal kick, waited on teh edge of the penalty area behind the Sutton defence and when the ball from Farman cleared everyone he, like Bugiel in the first half, couldn't keep his shot down. At the other end Milsom saw a free kick evade his onrushing team mates and the far post, but Barrow achieved the breakthrough when substitute Josh Gordon and Hutton combined on the right and Hutton's cross fell for Rooney, who this time found the net from about twelve yards out.

The joy of the goal for Barrow was tarnished when Kay was shown a second yellow card as the players made their way back from the celebrations, appearing to make a comment to referee Ben Toner to which the official took exception, and the home side went in to self-destruct mode again eight minutes later when, as Sutton built an attack on the left, Brown grabbed hold of Bugiel off the ball in the penalty area and pulled him over. The referee had spotted the offence, pointed to the spot and booked Brown, but Milsom's penalty, while well struck, was at a a good height for Farman who turned the ball away for a corner.

Gordon almost added a spectacular second for Barrow with a long range shot which was just over the bar, before a lengthy stoppage was caused by an incident in the crowd and when play restarted as the 90 minute mark was recahed, the reserve official indicated another ten to go. Sutton eventually forced their way in to Barrow territory with just over two of those minutes remaining, but the home side held firm, Ajiboye was well challenged by Brown as he tried to get a shot away just outside the six yard box, and Barrow held on to celebrate survival, although events at Oldham may mean the celebrations have to wait a bit longer. 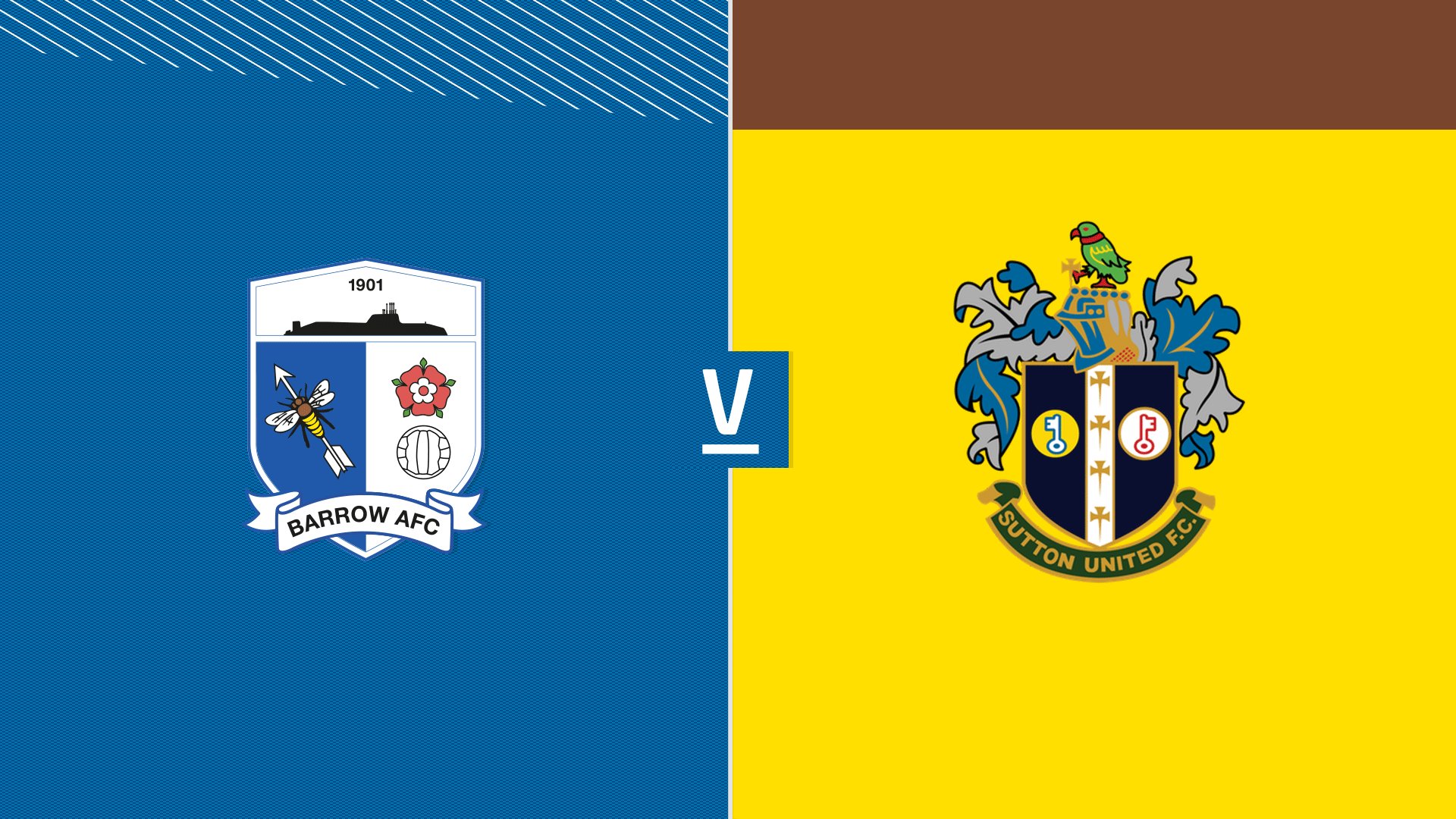 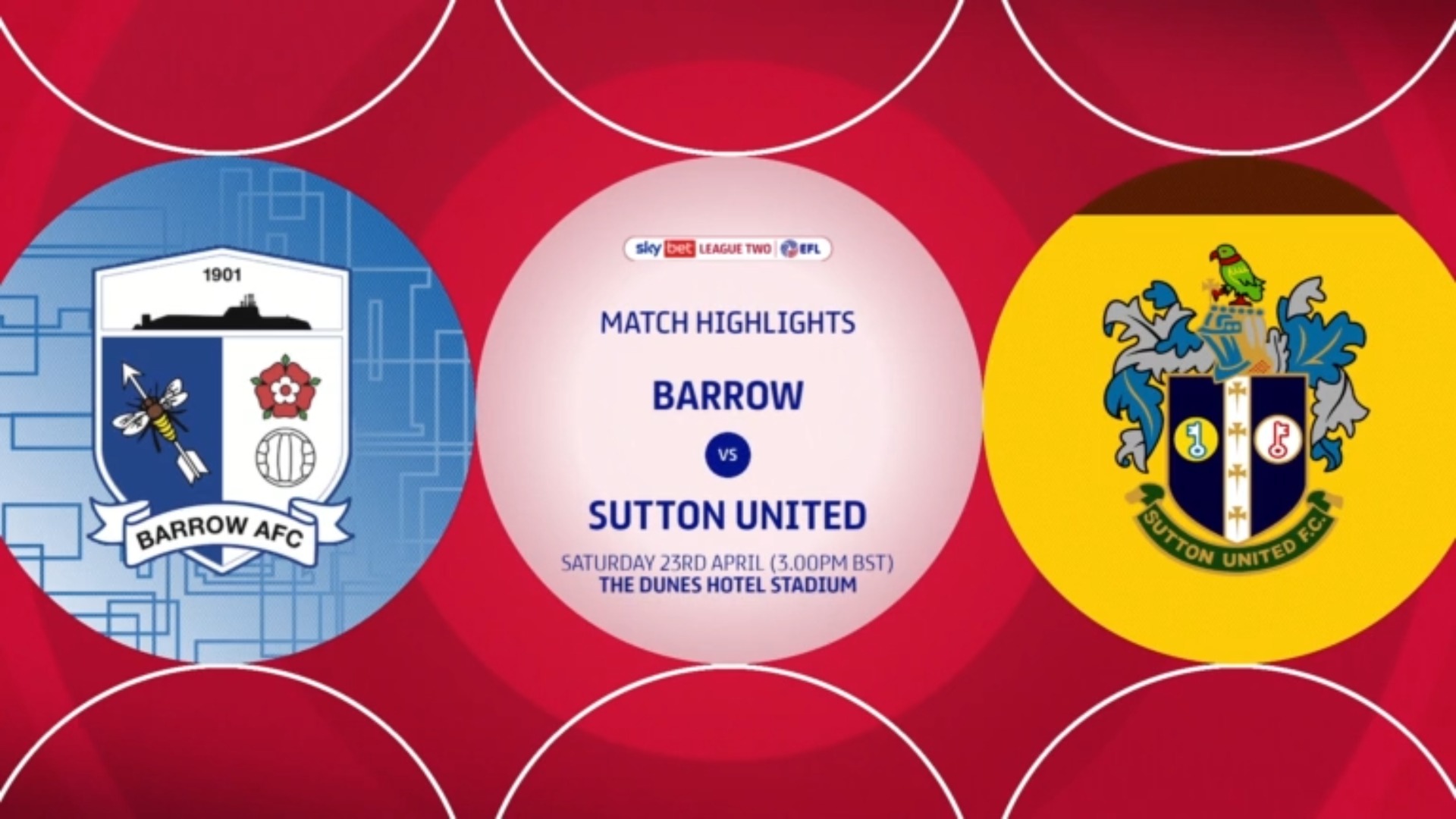 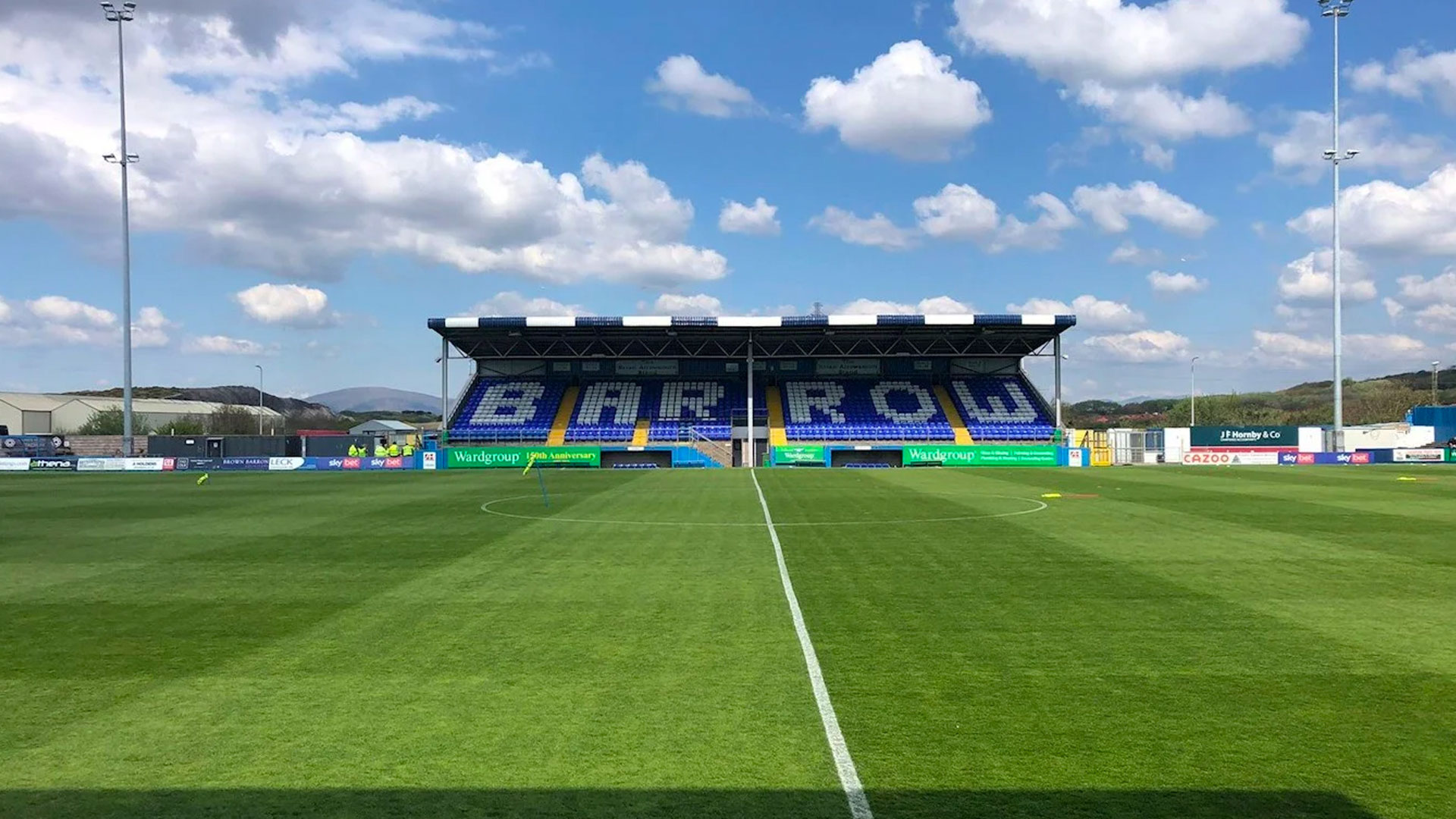