Sutton create another piece of club history on Tuesday evening, competing in the Carabao Cup for the first time with a visit to the Cardiff City stadium to take on championship side Cardiff City, managed by Mick McCarthy.

After taking over from Neil Harris in January, Mick McCarthy supervised an upturn in fortunes that at one stage looked as though it might produce an unexpected play-off place, although the Bluebirds ultimately finished in 8th place, and they began this season's campaign on Saturday with a 1-1 draw against last season's beaten play-off semi-finalists Barnsley.

Cardiff's recent EFL Cup history is not that distinguished, and last season they were a victim of a first round shock when they lost 3-0 at Northampton, then in League One but relegated at the end of the season. Indeed you have to go back four years for their last victory in the competition, when they beat Portsmouth 2-1 after extra time in the first round before going out at home to Burton.

Their best season in the competition was in 2011-12, when they reached the final and took Liverpool all the way to penalties at Wembley, losing the shootout 3-2. The shootout was forced by a 118th minute equaliser from Ben Turner, who has faced U's in recent seasons as part of Notts County's defence.

Also making its debut on Tuesday will be Sutton's new third choice kit of all black with amber trim, with the names of all the supporters who made a financial contribution to the club last season in the form of season tickets, United We Stand contributions and other sponsorship.

Manager Matt Gray has no new injury worries after Saturday's unfortunate defeat at Forest Green, with Will Randall continuing his recovery from a hamstring injury and Tobi Sho-Silva back in training.

Should tomorrow's game, which kicks off at 7pm, be drawn at the end of 90 minutes it will go straight to penalties with no extra time, with the second round scheduled to be played in a fortnight's time.

Admission is available on the gate on Tuesday, cash only, from Gate 12. Prices then are £15, £12 and £8 respectively. The ground is in Leckwith Road, postcode CF11 8AZ, south west of the city centre. The closest station is Grangetown, reached with a change at Cardiff Central which is served by a half hourly service from Paddington. It is not possible to return by train the same evening.

If you're not making the trip you can listen to SUFCtv's commentary of the game through the iFollow tab here, price £2.50 although you can also buy a monthly pass for £4.49 or a season's pass for £45.

Sutton's debut in the Carabao Cup ended in the defeat that the relative status of the two teams suggested it should, but only after U's had given Championship outfit Cardiff City a huge scare.

Ahead in only the fourth minute thanks to a stunning counter attack finished off by Donovan Wilson, U's had much the better of the first half and could have led by more. However a mistake by Dean Bouzanis of the sort hardly seen at all last season gifted Cardiff an equaliser a minute before half time, and from there the home side took the initiative and seemed to be well on their way before Coby Rowe's late goal sparked an injury time flurry in which goalkeeper Alex Smithies saved well from Harry Beautyman.

While U's made just the two changes from Saturday's line-up at Forest Green, Rowe and Kenny Davis coming in for Louis John and Enzio Boldewijn, Cardiff manager Mick McCarthy made wholesale alterations, Curtis Nelson and Aden Flint the only survivors from the 1-1 draw with Barnsley, and the incoming players including Kieffer Moore, prominent for Wales in the recent European Championships. It was Sutton who struck the first blow when Bouzanis, having claimed a cross from the right, arrowed a clearance in to the path of David Ajiboye, who gave Cardiff left back Tom Davies a tough debut and on this occasion reached the by-line before cutting the ball back for Wilson to hammer in to the net.

More might have followed as Smithies saved well from a Davis shot after Wilson had teed him up, and both Beautyman and Davis had shots blocked, but when Cardiff caused their first threat it nearly produced an equaliser as Rob Milsom was booked for tripping Marley Watkins on the edge of the penalty area, and from the resulting free kick Nelson's shot was blocked by Craig Eastmond and Moore sent the loose ball just over.

That was a rare moment of worry for Sutton, who were composed and stylish in their new third choice all black kit, and Beautyman curled an effort just wide before Wilson forced a mistake from captain Sean Morrison to race clear, but this time he was unable to beat the advancing Smithies.

Cardiff finished the half on the attack, Davies seeing a goalbound shot brilliantly blocked by Rowe, but just as it seemed U's would reach the break with a deserved lead, Moore laid the ball back for Watkins, whose shot was straight at Bouzanis but slipped through the keeper's fingers in to the net.

Despite that setback, U's started the second half well, Ajiboye winning an early free kick from which Milsom was denied by Smithies, and the resulting corner was cleared by Morrison just as Ben Goodliffe seemed set to head in to the net. However Cardiff were soon in front, Davies breaking forward and although Beautyman intercepted his pass the ball fell for Watkins to double his tally on his debut with a low shot from the edge of the penalty area.

For all U's efforts the Championship side seemed to have a measure of control after that, with Cardiff's defence under less pressure. Flint did well to block a Wilson shot just before the striker made way for Enzio Boldewijn, but with six minutes to go a Cardiff substitute seemed to have put the game beyond Sutton's reach as Josh Murphy collected a long pass down the left, cut in and scored with a shot that would probably have beaten Bouzanis even without Milsom's deflection.

There was still time for late excitement, though, as a scramble following a left wing free kick ended with substitute Richie Bennett's mis-hit shot falling for Rowe, who fired home on the turn to register his first Sutton goal. That was in the 90th minute, and in stoppage time Beautyman found himself through on the right of the penalty area only for Smithies to come out and deflect his shot wide. Bennett headed just past the post from the resulting corner, and Cardiff held on to claim their second round place. 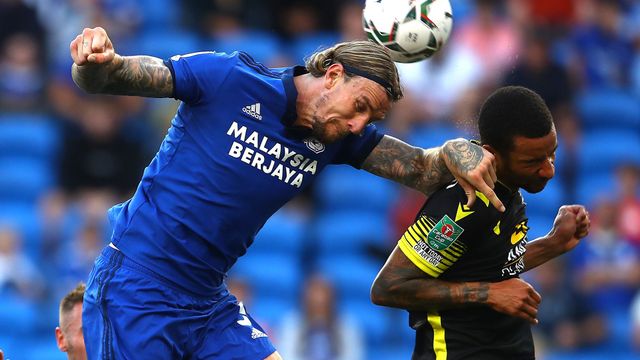