After two defeats on the road this week, Sutton will hope a return to the VBS Community Stadium leads to a change of fortune when Tranmere Rovers are the visitors on Saturday.

U's haven't lost at home since Walsall left with all three points at the end of October, and after seeing the Saddlers and Swindon complete Sky Bet League Two doubles over the past week, it's a chance for Sutton to claim one following the 1-0 win at Prenton Park in November when Isaac Olaofe scored the only goal of the game, and put it alongside the double completed over Carlisle earlier in the season.

It will be a far from easy task, though, with Tranmere having won their last two games, an exciting 3-2 win against Mansfield followed by a more straightforward 2-0 defeat of Harrogate on Tuesday, the Yorkshire side playing over an hour with ten men. Those wins steadied the ship after a previous run of five games that yielded only a point, and Tranmere go in to the weekend's action outside the automatic promotion places on goal difference, although by the time they take the field on Saturday Newport might have widened the gap in Friday's game against Hartlepool.

Tranmere's promotion chasing position is based on their excellent home form, with fourteen wins out of nineteen games at Prenton Park, but away they have won only four in eighteen, at Carlisle, Crawley, Exeter and Oldham, all by the only goal of the game.

It will be Tranmere's third visit to the ground, with a 3-1 win in December 2017 on the way to promotion from the National League, a year after a Dan Fitchett goal had marked U's first National League game in front of the live BT cameras with a 1-0 win.

U's were without ten first team squad members on Tuesday in the slightly unfortunate defeat at Swindon, which saw U's drop outside the play-off zone, and will hope that some of the absentees may be fit to return to face Tranmere.

Referee Will Finnie will be familiar with both teams, the Northamptonshire official having taken charge of the November meeting on Merseyside.

Tickets can be bought on line here for home supporters, or can be bought from the ticket kiosk on the day, although we do advise arriving at least an hour before the start if you wish to buy on the day to avoid queues around the kiosk and the turnstiles. Tranmere have sold out their allocation of tickets.

Home supporters are welcome to join us before the game for a pre-match drink, with all club bars opening at 12 noon.

Those unable to go to the game can listen to live audio commentary through our iFollow service, and anyone without a valid monthly or seasonal pass can buy a match pass for £2.50 here. A programme is also available to order online to be sent out after the game, click here.

In a game for which the cliche 'game of two halves' could have been invented, Sutton and Tranmere shared the points, U's dominating the first half but with only one goal to show for it, and Tranmere coming back strongly in the second half to grab an equaliser, with the visitors denied a stoppage time winner by a magnificent Ben Goodliffe tackle which was as valuable as the goal with which he gave U's the lead after a quarter of an hour.

The flow of the game was dictated by a strong wind blowing towards the Gander Green Lane end of the ground, with U's unusually attacking that end in the first half, and the fear that more than one goal would be necessary was realised when Tranmere, who barely got out of their own half before the break, enjoyed much more of the game as this time it was Dean Bouzanis, returning after injury, who was the goalkeeper struggling to reach the halfway line with clearances. Once Josh Hawkes had equalised midway through the half, Sutton actually created more than their opponents had in the first period, but David Ajiboye missed two good chances and it was the visitors who came closest in the last action of the game when Goodliffe's brilliant tackle denied Elliott Nevitt with the goal at his mercy.

As well as Bouzanis, U's were able to welcome back captain Craig Eastmond, although with Will Randall added to the absentees the net gain was only one player, and with the wind on their backs U's put Tranmere under pressure from the start. After only five minutes Enzio Boldewijn met Joe Kizzi's deep cross with a diving header than was superbly saved by Joe Murphy, U's claims that he had clawed the ball back from behind the line falling on deaf ears.

Boldewijn was a prominent early threat for U's, curling a shot just wide from 25 yards and then seeing a deep left wing cross headed away for a corner which he took himself, and Goodliffe's glancing header bounced through the penalty area and in off the post.

For all the pressure U's were unable to add to the goal, Omar Bugiel going closest when he won a good challenge to burst clear on the left, but a heavy touch gave Murphy the chance to come off his line and smother the striker's shot. Ajiboye shot over from the edge of the penalty area, and Kizzi had an effort scrambled away from a corner, while just before half time Bouzanis was tested for the first time by a skidding low shot from Hawkes which he could only push away, U's eventually clearing the danger from the rebound.

Tranmere's response to being outplayed in the first half was to bring on Sam Foley for Josh McPake, and after Nevitt had picked up the afternoon's only booking for an aerial challenge on Kizzi the visitors were far more prominent and Foley almost had an impact, a strong run through the middle ending with a pass to Hawkes, whose shot was deflected in to the hands of Bouzanis. Kane Hammings and Foley both had shots deflected wide, while U's defence was resolute, both Goodliffe and Coby Rowe commanding in the air. The equaliser always looked likely, though, and came when a fine first time cross from Lee O'Connor was met with a well controlled volley at the far post by Hawkes.

At that stage Tranmere looked capable of going on and taking all three points, but the goal sparked U's, who had at that stage created as little as Tranmere had in the first half, into life and Ajiboye, up front alongside Bugiel after Richie Bennett had been replaced by Ricky Korboa, should have restored the lead from Bugiel's pass but shot badly over from fifteen yards.

Nevitt ran on to one long pass and poked a shot just past the post, and Bouzanis did well to hold a low shot from Foley, but the game almost had a dramatic finish, firstly when Ajiboye had another chance with two minutes to go, this one more of his own creation as he turned on to a Bugiel pass with a devastating turn of pace that took him clear of three defenders and round Murphy, only for his control to desert him as the ball ran away for a goal kick. Then a needless foul on Boldewijn by Josh Dacres-Cogley gave U's a chance to strike late, but Goodliffe's header looped harmlessly in to Murphy's arms. A quick release from the goalkeeper suddenly gave Tranmere the chance to grab the winner, and Nevitt collected Hemmings' pass and looked certain to score when Goodliffe came in with a superb tackle to turn the ball away, and after Nevitt headed over the resulting corner referee Will Finnie blew the final whistle. 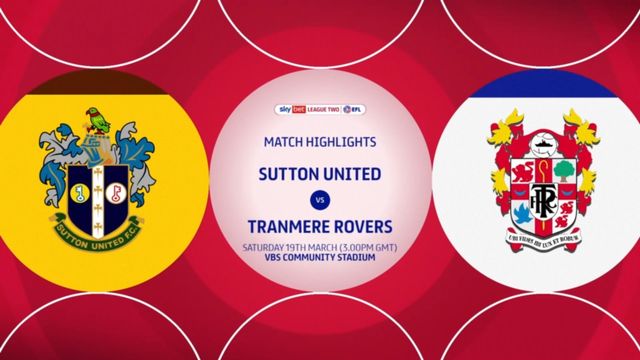 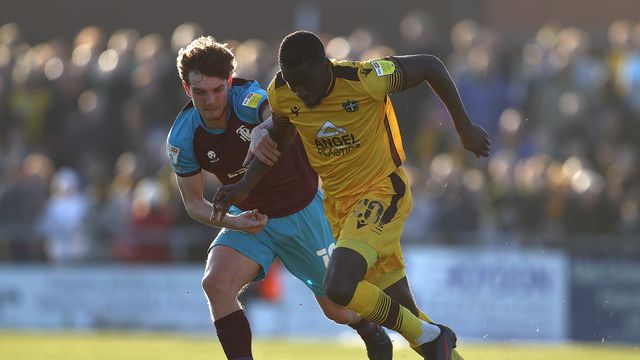