After Tuesday night's win against Mansfield, Sutton will be looking to make it back to back home successes on Saturday when Barrow make the long trip to the VBS Community Stadium.

While U's were picking up three points on Tuesday, Barrow gave a battling performance away to League Two leaders Forest Green, holding out for over an hour before two Matt Stevens goals enabled Forest Green to maintain their place at the top, and extended Barrow's winless run to eight games, their last success coming at the beginning of October when they won by the only goal at Mansfield. They come in to the game in 20th place, but before their recent poor run they did record some good wins, at home to Newport and Hartlepool and away to Oldham and Mansfield.

The clubs have met six times at Sutton before, with three of the games drawn, and Barrow's one win coming in February 2019 when Josh Kay's late, deflected shot proved to be the only goal of the game. The following season saw Barrow promoted to the EFL as champions, their visit to Sutton coming just a month before the season was curtailed. In front of the BT cameras Scott Quigley scored twice to put Barow two up inside half an hour but U's fought back to draw 2-2, Harry Beautyman scoring twice, the second a penalty won by Isaac Olaofe on his home debut. A number of the Barrow side that won the league, including Kay, are likely to be in the squad on Saturday.

Referee on Saturday is Brett Huxtable, who has refereed Sutton twice in the past, at Welling in the second leg of the 2011-12 National League South play-off semi final and in the FA Cup replay at Slough three seasons ago - by coincidence the referee for the first game against Slough, Sam Purkiss, is scheduled to be in charge of Tuesday's Papa John's Trophy game against Stevenage.

Tickets can still be bought on line by clicking here. Alternatively they can be bought at the ticket kiosk before the game on Saturday, but as always we would recommend buying in advance rather than waiting until Saturday afternoon, but if you do need to wait until the afternoon of the game please make sure that you allow plenty of time for buying your ticket and going through the turnstiles.

Tickets will also be on sale for the away games at Bristol Rovers (FA Cup), Newport and Bradford City before and after the game.

The bars will be open from 12 noon for any home supporters that want to enjoy a leisurely drink before the game.

As usual our iFollow service will have commentary on the game and you can buy a pass for £2.50 here, with monthly and seasonal passes still available.

On an afternoon which was unpleasant for both playing and watching football, Sutton and Barrow put on a much better game than might have been expected in the conditions, with David Ajiboye's early goal enough to give U's a second home win of the week and a place in League Two's top six.

The visitors, now without a win in nine games, will have made the long trip back to Cumbria feeling, having forced fifteen corners during the afternoon, that they should have taken something from the game, and Sutton were at full stretch to preserve the lead in the last ten minutes, but preserve it they did thanks to some superb defending and one fine save from Dean Bouzanis.

U's were forced in to one change, Ali Smith picking up a knock in training and Kenny Davis returning to the starting line-up, while Will Randall was preferred to Ricky Korboa on the left, and it was Sutton who started the brighter in cold and blustery conditions. After just four minutes Ajiboye cut in on the right and crossed low for Randall, who couldn't turn the ball in at the near post, and Randall also sent a shot over from just outside the penalty area.

With the wind blowing across the pitch Josh Kay, on the Barrow left, saw a lot of the ball early on in more space than U's might have liked, and it should have led to a Barrow goal when he played the ball in to the unmarked Offrande Zanzala, who seemed as though he had to score but could only shoot at Bouzanis.

It was an expensive miss, because U's had soon struck what proved to be the decisive blow. Davis was fouled in midfield, and Rob Milsom reacted quickly by immediately sending the free kick across to Ajiboye on the right wing, and he cut in past Kay and Tom White before placing a low curling shot with his left foot just inside the far post.

Zanzala soon had a chance to atone for his earlier miss when Matty Platt's ball forward drifted over Ben Goodliffe and left Zanzala in the clear, but he prodded the ball across goal and wide of the far post.

Barrow's attempts to play out from the back almost got them in to trouble more than once, with Olaofe dispossessing Platt but the defender sticking out a foot to concede a corner, and Olaofe might have made it 2-0 when he hooked the ball just wide following a corner, but, after a delay as assistant Daniel Bonneywell limped away to be replaced by reserve official Michael Begley, it was Barrow who finished the half on the front foot as White shot just wide from the edge of the penalty area.

Just before half time Kay was booked for a heavy challenge on Ajiboye which some referees might have treated more severely than Brett Huxtable, who showed a yellow card. The visitors made a half time change with Remeao Hutton replacing Jordan Stevens, but Sutton had the first sight of goal, Davis shooting just too high from twenty yards. There was always a threat from Barrow, though, with Josh Gordon becoming increasingly prominent and he cut in from the right before sending in a low shot that Bouzanis was safely behind. Visiting keeper Paul Farman was then called in to action twice in quick succession as another incisive run from Ajiboye ended with a low shot that was saved, and Omar Bugiel then also tried his luck from a similar range and again Farman was equal to the effort.

Just after Kay had seen a shot deflected in to the side netting, Bugiel was involved in a moment of controversy as, having been booked for persistent infringement early in the second half and with Richie Bennett standing on the touchline waiting to come on, he brought down James Jones as the defender brought the ball out of defence. The referee ignored the protests of the Barrow players and opted against showing Bugiel a second yellow card, with Bennett replacing the striker before the free kick could be taken, and Barrow skipper Ollie Banks booked for the vehemence of his protests.

As time ran out Barrow pushed forward looking to avoid a third consecutive defeat and reward the 164 supporters who have braved the travelling conditions, bringing on defender Mark Ellis as a striker, but Sutton's defence, not for the first time this season, was just about faultless. Ellis headed over from a left wing cross that gathered pace on the gale as it reached him, and Bouzanis tipped over a fierce shot from Robbie Gotts. The keeper was booked for time wasting after running to the side of the pitch to change the ball that he felt had gone flat, only for the referee to disagree, while opposite number Farman, having kept his team in the game by pushing the ball off the feet of Donovan Wilson after the substitute had pounced on a misplaced header, joined his attack for a succession of late corners, but U's held firm as John and Davis produced fine interventions to deny Banks and Ellis, and Platt's header was scrambled away by a combination of Wilson and Bouzanis at the foot of the post. 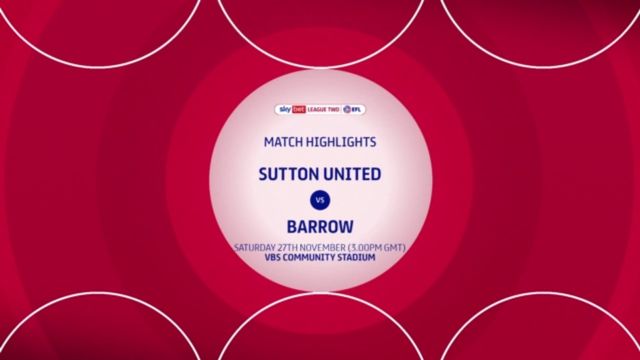 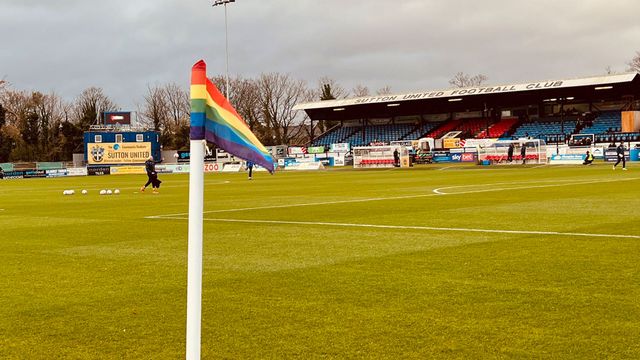