Sutton's wait for an away EFL win ended at Sixfields with a commanding performance and well deserved victory against a Northampton side that went in to the game in fifth place in League Two.

The league placings meant little, though, and by the end U's had climbed to 11th, one place behind the hosts. U's dominated from start to finish, and goals either side of half time, the second just 25 seconds in to the second period, ensured that the away support would be celebrating at the end of a game played in driving rain and wind. U's had the benefit of the elements before the break, and made their superiority count when Joe Kizzi (above, celebrating) headed his first Sutton goal with four minutes of the first half left, and Donovan Wilson's strike right after the start of the second half gave Northampton a task that they rarely looked like achieving.

U's opted for the same starting line-up that had won so convincingly against Carlisle a week earlier, with former Northampton winger Ricky Korboa on the bench after Isaac Olaofe picked up a knock in training, and the tone was set early on, Wilson picking up possession as the ball broke to him on the right of the penalty area after just four minutes and firing in a shot that drew the first of several good saves from Liam Roberts.

Louis John produced one good block to divert a Sam Hoskins cross for a corner, but even in the early stages U's seemed to have the Northampton attack well marshalled and as the half went on it was at the other end that the chances began to arrive. Craig Eastmond arrived late to meet Rob Milsom's cross with a header which went just wide, and then a good link up on the right between Eastmond and Ali Smith ended with Smith's cross met by a firm Richie Bnnett header which was kept out by the best of Roberts' saves, diving away to his left. Smith was flagged offside as he closed in on the rebound, and when the free kick was sent downfield Northampton had their best chance as a couple of deflections saw the ball fall to Danny Rose, who sliced a shot side when he should have done better. It was U's who were in charge, though, and they finally made it pay when Milsom's fine inswinging free kick was headed away for a corner by Shaun McWilliams, and Kizzi met Enzio Boldewijn's flag kick with a glancing header which flashed in to the net.

It might have been worse before half time for Northampton, as Boldewijn was only just too high with a first time effort after a long Dean Bouzanis clearance was headed in to his path, and McWilliams, one of two players booked towards the end of the half, could easily have received a second yellow for a late challenge on Bennett, but hopes they might have of using the elements in their favour after the break were dashed within the first thirty seconds as Milsom, Boldewijn and Bennett linked up on the left, Bennett's well timed pass seeing Wilson beat Northampton's attempt to play him offside and go on to drill a low shot past Roberts, who this time could do nothing.

David Ajiboye could have added a third soon afterwards but shot wildly wide after being put through by Eastmond, and although Northampton posed more of a threat after the arrival of Kion Etete, who had one shot from a narrow angle blocked by Ben Goodliffe after Mitchell Pinnock's cross had fallen to him, the majority of the chances were still falling to Sutton and after Boldewijn had shot just wide Roberts had to make saves from Smith and Wilson before denying Boldewijn with his legs in the last five minutes, although having done the hard part after being set up by substitute Omar Bugiel he will be disappointed not to have scored.

Goodliffe produced one superb block to prevent a Hoskins shot going in, although referee Rebecca Welch had already penalised Etete for his challenge on Bouzanis which caused the ball to run loose, and Bouzanis, on his 31st birthday, received his only unwanted card, of the yellow variety, for his reaction. There were no other alarms for U's, though, who were able to receive the acclaim of the 224 travelling supporters soon afterwards. 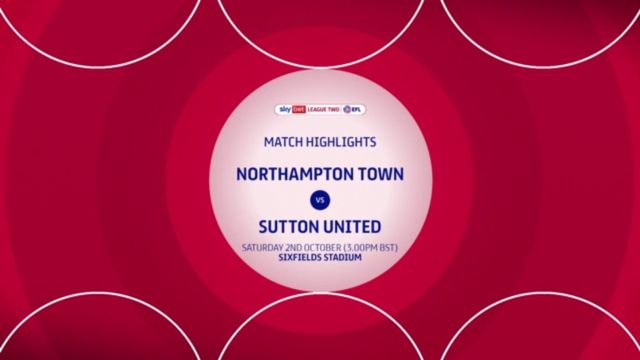 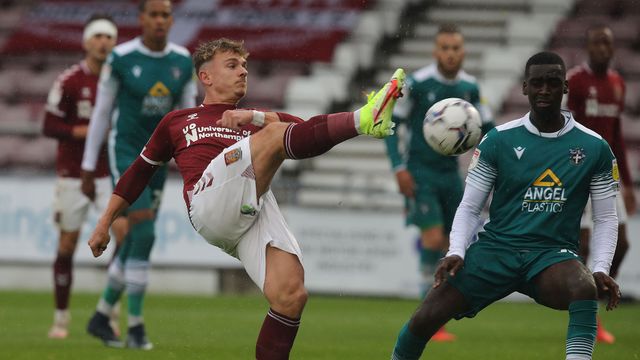