The two in-form sides in Sky Bet League Two meet at the VBS Community Stadium on Saturday as Sutton and Port Vale lock horns for the first time.

Port Vale's run of four consecutive league wins, which was stretched in all competitions by a 1-0 defeat of Rochdale on Tuesday in the Papa John's Trophy, saw manager Darrell Clarke named as September's Sky Bet Manager of the Month for League Two, with Matt Gray among the nominees, and Vale come in to the game in third place in the league table, five points behind leaders Forest Green, whose only league defeat came at the hands of Port Vale at the end of August. Our visitors tomorrow are unbeaten away from home since losing at Northampton on the opening day of the season, and apart from the win at Forest Green they have also picked up maximum points at Swindon and Scunthorpe, and drawn at Stevenage.

Sutton, meanwhile, have won four of the last five league games, and have four consecutive league and cup wins at home, and moved in to the top half of the table with last week's fine 2-0 win at Northampton which broke the duck away from the VBS.

Sutton will definitely be without striker Omar Bugiel, who is away with Lebanon for the World Cup qualifiers against Iraq and Syria, and was an unused substitute in Thursday's goalless draw with Iraq in Qatar - the game against Syria is in Jordan on Tuesday. Kenny Davis will also be missing after injuring a hamstring in training while one other injury picked up at Northampton could necessitate a change. Isaac Olaofe missed last week through injury but U's hope he will be available.

Tomorrow's referee is Declan Bourne, who is in his second season on the Football League list and has taken charge of several Sutton games in the National League.

Ground tickets for home supporters will be on sale from the ticket kiosk before the game, but anyone wanting to buy on the day is encouraged to arrive by 2.00pm to avoid congestion around the ticket kiosk and turnstiles. It is still possible to buy tickets on line here and avoid the queues.

If you can't get to the game you can order a copy of the matchday programme on line here, packed with all the regular features including the manager's thoughts, Mark Frake's look back at games around this date in history like the Amateur Cup tie against Carshalton 95 years ago, as well as continuing his look back at grounds we've visited in yesteryear - this week it's Richmond Road. Andrew Church continues his series, while John Parsons confirms the latest Supporters' Club travel details. Plus - as requested by the readers - the latest player statistics.

As this is an international weekend the game is being live streamed and video passes can be bought for £10 here. Anyone unable to watch but who would like to listen is advised to buy a monthly(£4.49) or annual(£45) audio pass, which will cover audio commentaries for all games within the relevant period, including Tuesday's Papa John's Trophy game at Portsmouth which will also be live streamed.

The club bars will be open from 12 noon tomorrow and also after the game, when you can come in and discuss the game over a drink, and see the latest Strikers Are Key draw.

A stoppage time winner from defender Coby Rowe clinched a breathless victory for Sutton in a thrilling game that saw U's move up to 7th place in the Sky Bet League Two season.

It looked likely to be a long afternoon for U's when they trailed 2-0 after half an hour, a scoreline that fairly reflected the way the opening stages had gone, but crucially U's had cut the deficit by half time, Rob Milsom's deflected shot squeezing inside the post despite Lucas Covolan's attempts to keep it out, and that it might be U's afternoon was suggested further with twenty minutes left when a throw in that should probably have been awarded to Port Vale led to an own goal from Ben Garrity. However Vale went back in front with twelve minutes left only for U's indomitable spirit to come to the fore again as substitute Will Randall headed an equaliser with three minutes left and, amid scenes reminiscent of Roarie Deacon's famous winner against Cheltenham, Coby Rowe, in the side as a replacement for the injured Ben Goodliffe, hammered in a winner as the game entered stoppage time and saw Port Vale experience the other side of the coin after two late goals to win against Leyton Orient last week.

In the opening stages U's were arguably outplayed more than at any time this season, and had to defend several long throws from Dan Jones, who U's fans would have remembered being similarly threatening for Barrow, and although they had a couple of moments when a delightful link up between Donovan Wilson and David Ajiboye led to Ajiboye's low cross being cut out by Lewis Cass to deny Enzio Boldewijn a tap in, and Ajiboye just failed to collect a superb pass from Ali Smith, it was no surprise when the visitors went in front. David Worrall collected a cross field pass from Jones to go clear on the right as Milsom slipped, and it took Louis John to cut out his pull back to Jamie Proctor. However U's never really cleared the corner, and when Proctor crossed from the left Dean Bouzanis came off his line but failed to get there and Nathan Smith's header looped in to the net. Seven minutes later a crisp passing move saw Tom Conlon exchange passes with James Gibbons, whose low cross was swept in to the corner of the net by Proctor.

With Bouzanis twice saving from James Wilson U's could have been in even deeper trouble against impressive opposition, and at that stage few would have guessed what would follow later, but nine minutes before half time Milsom's shot from outside the penalty area took a deflection which left Lucas Covolan scrambling unsuccessfully to keep it out, and before the interval an incisive run from Ajiboye had been ended illegally on the edge of the penalty area, Smith booked for the foul but Milsom unable to clear the wall with his free kick.

The early stages of the second half were similar to the first and it took good blocks from Louis John and Rowe to prevent Port Vale regaining the two goal advantage. U's brought on Isaac Olaofe with half an hour to go and within ten minutes the move had paid dividends as he chased a long Bouzanis clearance and although Jones was across to snuff out the danger U's were awarded the throw when it looked as though the defender had played the ball off Olaofe. Milsom's throw was cleared back to him, and from his cross Ben Garrity got his bearings all wrong and sent a header beyond Covolan in to his own goal. Vale's protests at the award of the throw led to a booking for manager Darrell Clarke.

Four minutes later Olaofe was away again, dispossessing Jones, who chased back to make an outstanding challenge in the penalty area to deny the on loan striker a shooting chance, and the importance of that challenge became apparent when Conlon shot home through a crowd of players after a right wing corner had been headed clear by Smith. U's might have equalised immediately as Richie Bennett brought down Milsom's diagonal pass and was denied by Covolan, but they kept pushing and were rewarded with three minutes left when substitute Ricky Korboa, who had only been on the pitch for two minutes, laid Joe Kizzi's throw-in back to him and Kizzi's superb cross found another substitute, Will Randall, climbing highest to send a downward header in to the corner of the net to Covolan's left.

At that stage most people in the ground would have accepted 3-3 as a fair result, but there was still more to come as substitute George Lloyd picked up their fifth yellow card on the pitch, three of which had been for time-wasting, for a foul on Craig Eastmond. His short free kick was lifted in to the penalty area by Randall, Covolan failed to collect and in the ensuing scramble the ball landed at the feet of Rowe, who crashed it in to the top of the net, sending his manager rushing down the touchline in celebration. Vale's frustrations led to a booking for assistant manager Andy Crosby after the final whistle with Bouzanis also shown a yellow card by referee Declan Bourne, no stranger to incidents after the final whistle in Sutton games having shown red cards to Eastmond and Mike Fondop at Chesterfield two seasons ago.

Tickets for Saturday's game at home to Port Vale continue to sell well, and we would advise buying your ticket in advance of the game rather than wait until Saturday to avoid queues around the ticket office.

Tickets can be bought on line here, and we will now have tickets on sale at the club shop each morning for the rest of this week, starting on Wednesday 6 October. The shop is open from 10am to 12 noon, and as well as tickets for Saturday's game you can also buy tickets for the away games coming up at Portsmouth, Crawley and Rochdale. 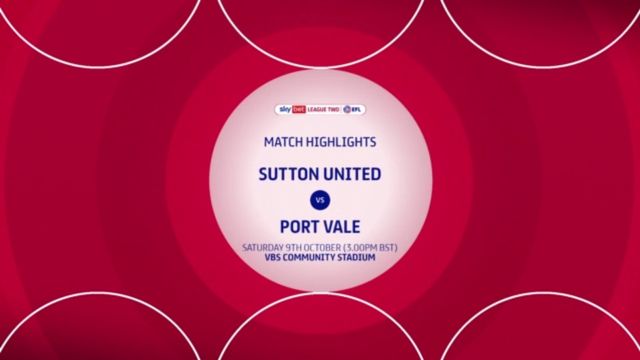 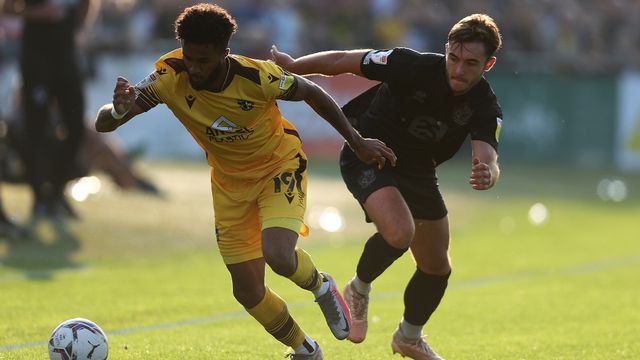