After Tuesday night's superb second half comeback at Northampton, Sutton will be hoping to take that form in to Saturday's trip to Stockport County. Sutton will be wearing all black.

Stockport regained their Football League place last season after impressively winning the National League, and after a slow start, losing four of their first five league games, they have shown signs of finding their feet in recent weeks and have won three of their last four league games, all against sides currently in the top ten of the league table. Tuesday's win against Carlisle was their third at home, where Wimbledon and Colchester have also been beaten, while Barrow and Grimsby are the two teams that have come back from Edgeley Park with maximum points and there have been draws with Harrogate, Swindon and Walsall.

Manager Dave Challinor took over midway through last season to guide Stockport to the National League title, but has previously come up against U's while in charge of Hartlepool and Fylde, while leading scorer Paddy Madden was last season's Player of the Year after his move from Fleetwood. During the summer County also signed striker Kyle Wootton, who U's have faced on several occasions with Notts County.

U's manager Matt Gray is expecting a difficult game at Edgeley Park, saying: 'We had some good games with Stockport when they were challenging for the National League along with us two seasons ago, and they were excellent in winning the league last season. They're a big and ambitious club with a big fan base, so we know we will need to be at our best in what should be a good atmosphere.''

Sutton's comeback in the second half at Northampton earned a deserved point, extending U's unbeaten record to four games in all competitions, and skipper Craig Eastmond and defender Louis John, who both missed the game at Sixfields, have an outside chance of being fit for Saturday's game.

Referee on Saturday is Simon Mather, who is in his second EFL season and refereed last season's home games against Carlisle and Scunthorpe, although he had to be replaced during the latter due to injury. He was also in the middle for the 3-0 win over Hartlepool with which U's clinched the National League title, when Stockport boss Dave Challinor was in the opposing dug-out.

Tickets and further details are available on line here, and will be available on the day from the ticket office at Edgeley Park, with no change in price.

If you can't make the game you can listen to our iFollow commentary, with a match pass costing £2.50 and a monthly pass £4.49. Click here to buy a pass. Overseas viewers can watch the game for £10, clicking on the same link, with monthly and seasonal passes also available.

The Supporters' Coach leaves at 6.45am.

Drivers should leave the M6 at Junction 19 and travel via the A556 and M56 to join the M60. Exit the M60 at Junction 1 (sign-posted ‘Stockport Town Centre’). At the roundabout, follow signs to ‘Cheadle A560’ also ‘Stockport County FC’ into Hollywood Way. Go straight on at the first set of traffic lights and turn right at the next (sign-posted ‘Cheadle A560, Stockport County FC’) onto the A560 towards ‘Ye Olde Woolpack’ pub. After 1.1 miles, turn left (no signpost, by the ‘Farmers Arms’) onto the B5465 Edgeley Road. After approximately 1 mile turn right into Dale Street at the traffic lights and take the second left into Hardcastle Road for the stadium. There is no car parking at the ground, but there are a number of pay and display car parks within a 5-10 minute walk of the ground.

By rail, Stockport station is very close to the ground but engineering works in the West Midlands on Saturday mean that journey times are longer than usual, taking around three hours, and the quickest options may not be direct services. For those wanting a simple journey, there are direct services from Euston at 9.11, 9.55, 10.14 and 10.52 which will all get you to Stockport in good time. Walk up Station Road, turn left at the top and cross at the pelican crossing before the roundabout.  Take the A5464 (Mercian Way) and turn left into Caroline Street for the stadium. Return direct to Euston at 17.04, 17.44, 18.03 or 18.44. For other options, which involve changes at either Birmingham International or Crewe, or journeys via Sheffield from St Pancras, go to www.nationalrail.co.uk.

Sutton were unable to overcome the handicap of a third minute red card for Omar Bugiel as Stockport completed a comfortable victory, their third in a row in the league. Bugiel was dismissed for a high challenge which referee Simon Mather decided warranted the maximum punishment, but having fallen behind in the 19th minute U's frustrated the home side until midway through the second half, when Paddy Madden and Will Collar added the goals that eased Stockport to victory.

The referee had gone to his pocket after only eleven seconds, Stockport's James Brown booked for a heavy challenge on Will Randall, but two minutes later it was the red card that came out as Bugiel caught Collar on the knee in his follow through after contesting a bouncing ball, a decision that seemed harsh so early in the game.

It punctured the optimism that Tuesday night's comeback at Northampton, and the return of Craig Eastmond and Louis John, and in the 19th minute Stockport made the extra man count as Brown's cross from the right was headed in by Kyle Wootton. For much of the rest of the half, though, U's kept the home side at bay, the only threat being an awkwardly bouncing volley from Madden which Ward parried, the keeper doing well to deny Miles Hippolyte from the rebound. There were sounds of disquiet from the home supporters towards the end of the half at Stockport's slow build-up play, and with Josh Neufville and Will  Randall threatening on the break U's might even have equalised just before half time when Donovan Wilson controlled Randall's pass well and hit a low shot that was scrambled untidily wide by Ben Hinchcliffe.

The second half started in similar fashion, but just as U's were harbouring hopes of being able to put the home side under pressure Wilson was penalised for a foul on Brown, another decision that frustrated U's players, and Calum McDonald's excellent inswinging free kick was met by Madden, who forced the ball in at the second attempt after Ward had superbly saved his first header.

U's made changes in formation and personnel in a bid to change the momentum,  switching to a back three with Randall and substitute Enzio Boldewijn as wing backs and Rob Milsom in midfield, but before the changes could have any effect Stockport broke after a poor throw in by Randall, and Madden and Hippolyte combined to set up the overlapping Collar on the right and his shot crashed in to the roof of the net from an angle to put the game beyond U's reach. 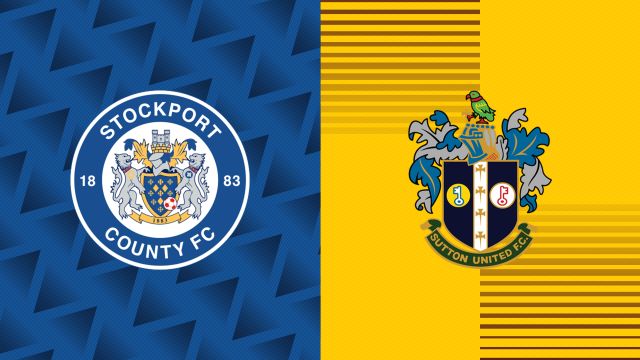 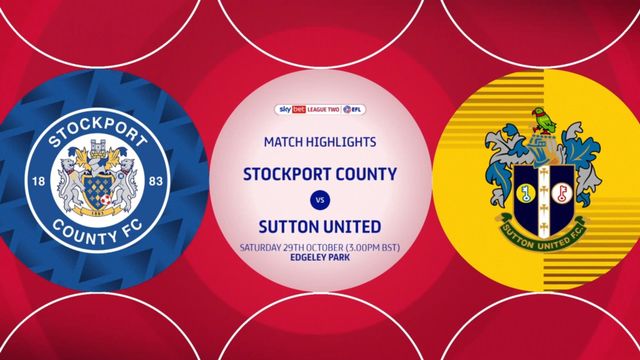 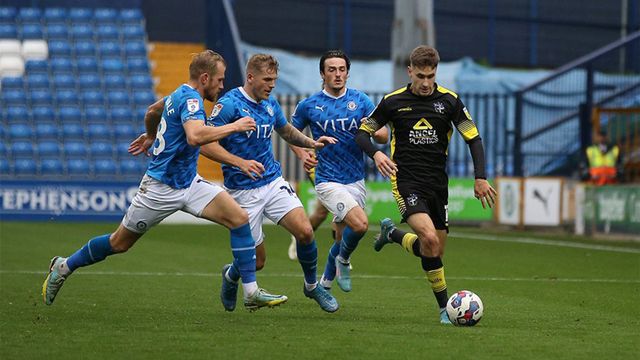