On Saturday Sutton appear in the FA Cup as a Football League side for the first time, visiting the SKYex Community Stadium to take on Hayes & Yeading United, who are currently second in the Southern League Premier Division South. We will be wearing amber. 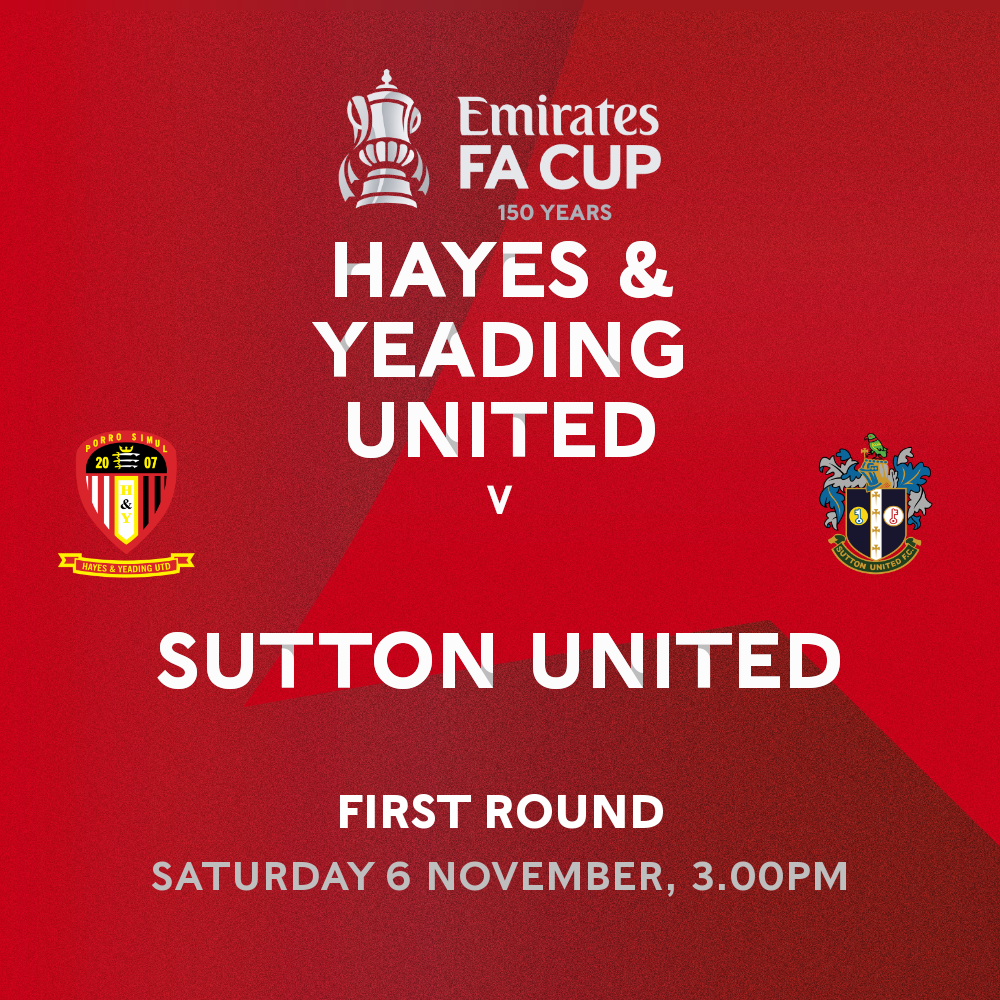 That league position doesn't tell the full story, however, as they have three games in hand over leaders Farnborough, who are three points clear, and have failed to win only one of their ten Southern League games, a 1-1 draw away to Metropolitan Police. Hayes remain unbeaten in all competitive football this season, and have knocked two National League South sides, Tonbridge and Dorking Wanderers, out of the FA Cup so far this season, the latter in a penalty shootout in the last round to earn Saturday's game. Their squad this season includes former Sutton strikers Moses Emmanuel, who took his goals tally for the season in to double figures in last Saturday's FA Trophy win on penalties at Heybridge, and Shaquille Hippolyte-Patrick, who scored his first goal for the club in the League Cup win over Metropolitan Police the previous Tuesday.

This is Hayes and Yeading's third consecutive appearance in the first round proper, with a defeat on penalties last season against Carlisle and Oxford United winning 2-0 in a live televised game in 2019. We last met in National League South in December 2015 at Maidenhead, which was H&Y's home ground at the time, U's winning 3-1 with two goals from Dan Fitchett and one from Jamie Collins, and avenging a single goal defeat at Sutton five weeks earlier.

While Hayes & Yeading have two former Sutton players in their squad, the Sutton management duo of Matt Gray and Jason Goodliffe both played for Hayes in the days when the clubs were separate entities, both captaining the side. Matt made over 60 appearances in the early 2000s in three seasons punctuated by injury, and Jason over 300 appearances between 1993 and 2001. They will have to select from a squad that again will be missing Richie Bennett, who completes his three match suspension, with Omar Bugiel set to make his 100th Sutton appearance and Isaac Olaofe eligible having been given permission by Millwall to play. Matt will be previewing the game with SUFCtv on Friday.

Referee on Saturday is Sam Allison, who has twice refereed FA Cup ties involving Sutton before, the 6-3 win at Dartford in he first round in 2016-17, and the 4th qualifying round success at Wealdstone two seasons later. He is in his second season as an EFL referee.

Should the game be drawn the replay will be at Sutton on Tuesday 16 November.

The game is segregated, and Sutton supporters should follow the direction signs to enter the ground by the first entrance. Tickets are still available through the Sutton Club Shop between 10am and 12 noon on Friday, and can also be bought on the day at the SKYex stadium from about 1.30pm. The selling point will be a temporary ticket office near the home turnstiles, but there will only be one window open and anyone wanting to buy on the day should arrive in plenty of time to buy a ticket. Admission prices are Adults £15 Seats/£13 Terrace; Over 60s and Students (16-22) £10/£8; Under 16s £5/£4. Those buying on the day should preferably use a contactless card, although cash is acceptable.

The SKYex stadium is in Beaconsfield Road, and from Sutton you should head to Hampton, turn right on to the A311 towards Twickenham and then in about a mile go left on to the A312 and continue round Heathrow Airport, crossing the A30, A4 and M4, on to the Hayes by-pass until the junction with the A4020 Uxbridge Road. Turn in towards Southall and Ealing, take the first right in to Springfield Road, and Beaconsfield Road is at the end. However there is no general parking at the ground, but parking is available for £5 (cash only) on a first come first served basis at the Nanaksar Thath Isher Darbar Trust in Springfield Road, just before the Goals Centre.

By rail the best station to use is Southall, served by a frequent service from Paddington, taking about quarter of an hour. Note that although Beaconsfield Road is first left after turning right out of the station, it is separated from the part of the road that the ground is on by the Grand Union Canal, with no crossing point, so turn up any of the roads on the right from Beaconsfield Road to reach Southall Broadway and then turn left to follow the main road over the canal before turning left again in to Springfield Road - it's at least a half hour walk, although a number of buses run along the Broadway. If you use Hayes & Harlington station (one stop on from Southall), there are taxis that will take you to the ground.

Due to FA commercial regulations the game will not be live streamed domestically or overseas, and the usual highlights packages will not be available, however SUFCtv will be filming the game and we will have highlights available on our website hopefully some time on Sunday. We will be providing a live audio commentary through the iFollow service for the usual £2.50, and passes can be bought here. Monthly and seasonal passes ARE valid. Note that the commentary is likely to be provided on a phone rather than through the usual broadcast equipment, which may cause a slight reduction in sound quality.