After the excitement of last season's run to the final of the Papa Johns Trophy, Sutton begin the quest for a repeat on Wednesday night at home to Chelsea's Under 21 team.

It will be a year to the day since U's debut in the competition against Crystal Palace's youngsters, when goals from Tobi Sho-Silva, Ali Smith and Ricky Korboa gave U's a 3-0 win, a first competitive win as an EFL club and paving the way for a memorable run that ended under the arch at Wembley at the beginning of April, and Wednesday's game will give U's a chance to compete against some of the most promising talent in the English game. Last season Chelsea finished as runners-up to Exeter in their group, then beat Forest Green on penalties in the second round, before going out 4-1 to their Arsenal counterparts in the last sixteen.

Sutton manager Matt Gray has hinted that he is likely to make changes on Wednesday from the side that beat Mansfield on Wednesday, following a similar approach to last season when U's won all the group games without conceding a goal. Once again this season, if a group game is drawn then each team receives one point, but there will then be a penalty shoot with the winners receiving an additional point - two of Chelsea's group games last season finished in that manner, with a penalties success against Exeter but defeat against Cheltenham.

Referee Alan Young is in his fifth season as an EFL official and took charge of U's win at home to Exeter last season.

As this is a cup tie season tickets are not valid and everyone will need a valid match ticket to enter the ground.

Tickets are on sale on line, for Sutton supporters here and for Chelsea supporters here. Prices are adults £12, concessions £7 and juniors £3, with tickets for children aged 12 and under free if bought in conjunction with an adult or concession ticket. There is an increase of £2 to all prices for a seat. While we would encourage supporters to buy tickets on line to avoid congestion around the ticket kiosks, tickets will be on sale on the night at no extra cost, for Sutton supporters from the ticket kiosk in the car park and for Chelsea supporters from turnstiles 9 and 10 at the Collingwood end of the ground. The Sutton fan zone and bars will be open from 6pm, with the turnstiles, and the Chelsea fan zone behind the visitors' terrace, open at 6.30pm.

A reminder that home supporters are now able to enter the bar from the ground at half time, with the new passageway from the Players' Bar to the stadium, between the main stand and the snack bar, OPEN from 8.15pm to gain access to the bar, and you can use the same door to go back out.  There will be no access to this route from the MBA Lounge, and initial admission to the ground must still be through the turnstiles.

We are still endeavouring to park last season's car park permit holders but would urge anyone wanting a space to get to the ground early. There will be NO access after 6.45pm and NO departures from car park until half an hour after the game for safety reasons, so if you anticipate arriving after 6.45 or need to leave straight after the game you will need to park elsewhere, either in surrounding side streets or the Gibson Road car park next to the Holiday Inn which is about a 15 minute walk away. 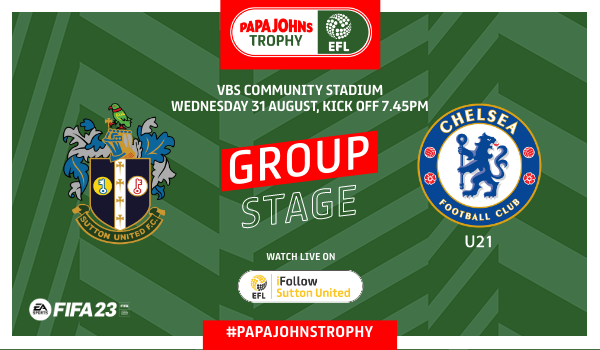 Supporters unable to get to the game can watch a live stream through our iFollow service, with a match pass costing £10 available by clicking here. Overseas iFollow subscribers are reminded that the early bird price of £140 for a season's viewing pass expires at midnight on 31 August, and from 1 September onwards the price will be £170. From Thursday it will also be possible for overseas viewers to buy a monthly pass for £25 - please note these video passes are not available in the UK, where video streams are sold on a match by match basis. However UK supporters can but a monthly pass for audio commentaries at £4.49, or a season's pass for £45. Use the above link to purchase any of these.

A match programme can be ordered on line here, price £3 plus postage, to be sent out after the game although programmes will of course be on sale around the ground and in the club shop. The programme includes memories of previous friendlies against Chelsea, although Wednesday's game is the first competitive meeting between the clubs.