A run of three home games in a week at the VBS Community Stadium begins this Saturday with a visit from Mansfield Town.

Beaten in the play-off final at Wembley by Port Vale last season having edged U's out of the top seven by one point, Mansfield are expected to be among the promotion contenders this season, and come in to the game in eighth place having won all three of their home League Two games but lost both away, at Salford and Leyton Orient, two of the current top six.

The Stags have had a blow recently with the news that key striker Rhys Oates faces a spell out with a ruptured pectoral muscle, but are hoping that Oli Hawkins, Lucas Akins, Hiram Boateng and Stephen Quinn may all be fit after recent injury absences.

Although Mansfield eventually finished a place higher than Sutton, it was U's who had the better of the two league meetings last season, winning 2-0 at home in November with goals from Louis John and Omar Bugiel, and then recording an excellent win at the One Call Stadium on Good Friday, Bugiel on target again along with David Ajiboye and Richie Bennett.

Omar's goal at the VBS in November (below) was a goal of the season contender, but he is unlikely to be able to repeat the feat on Saturday with manager Matt Gray expecting the game to come too soon for the striker after he limped off against Barrow a fortnight ago. Sam Hart is also still likely to be sidelined, but Will Randall and Coby Rowe both came through their return to action at Grimsby last week with no ill effects. 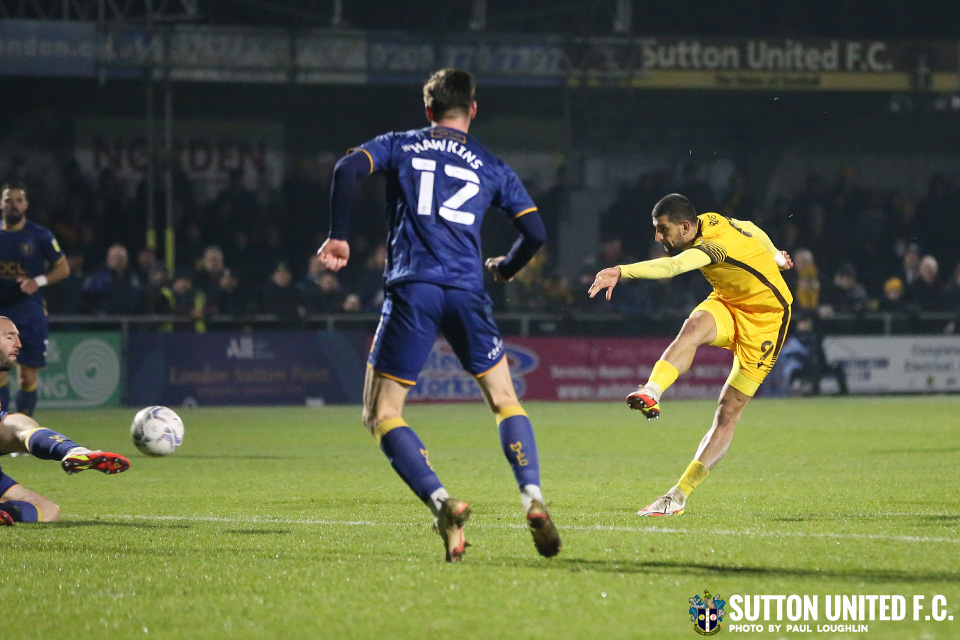 Saturday's referee is Devon-based Lee Swabey, who is in his eighth season as an EFL referee and took charge of Sutton's Papa Johns Trophy win at Portsmouth last season.

Tickets can still be bought on line here, with prices £20 for adults, £14 for concessions and £6 for juniors. Under 12s tickets are free if bought in conjunction with an adult or concession ticket. All prices rise by £5 for a seat, and while tickets can be bought in person at the ground on Saturday afternoon, prices for adult and concession tickets rise by £2, an increase that does not apply to tickets bought on line, even on Saturday. Mansfield supporters have their own link to buy tickets here.

Season ticket holders are reminded that they will need the replacement ticket card they will have recently received to gain admission.

Tomorrow will also see home supporters able to enter the bar from the ground at half time, with the new passageway between the Players' Bar and the stadium, between the main stand and the snack bar OPEN from 3:30 to access the bar, and you can use the same door to go back out.  There will be no access to this route from the MBA Lounge, and initial admission to the ground must still be through the turnstiles.

We will have a live audio commentary on our iFollow system from 2.50pm, with passes on sale priced £2.50 here. It is also possible to buy a monthly ticket for £4.49 and a season's pass for £45. You can also order a match programme to be sent out after the game, price £3 plus postage, by clicking here.

Supporters should be aware that there are no trains through West Sutton this weekend, but Southern services through Sutton and Northern Line services to Morden are scheduled to run as normal and buses 80 and 413 connect both stations to the ground.