Sutton go in to the last round of games of the Sky Bet League Two season with everything to play for, knowing that a victory at Harrogate will keep alive hopes of finishing U's debut EFL season with a place in the play-offs. U's will be wearing green.

Anything less than three points, and the end of season competition will be out of reach, but if Sutton can win for the first time at the Envirovent Stadium then U's will feature in the play-offs if just one of the following happens - Mansfield lose at home to Forest Green, Port Vale lose at Exeter or Swindon fail to win at Walsall. If none of those events occur then U's would miss out regardless of tomorrow's result at Harrogate, despite victory taking U's points total to 76.

While there will naturally be interest in what is happening elsewhere, unless U's win anything else is irrelevant and it will not be easy against a side who are ending the season in form after a poor run of four defeats in a row was ended with two successive wins, the second of which was at promoted Forest Green last Saturday while the first, at home to Carlisle, was their first home win in eight games. Victory tomorrow could see them finish as high as 14th in the table. They will also be wanting to give a good send-off to long serving midfielder Lloyd Kerry, who is ending his playing career after the game but staying with the club in a recruitment capacity.

The sides have met twice already this season, both tight affairs which saw Sutton score the only goal, first through Donovan Wilson (above) in the league in December, then with Craig Eastmond memorably marking his 300th appearance with the winner in the Papa Johns Trophy quarter final a month later, and neither side has yet won on the other's ground.

Manager Matt Gray reports that Craig Eastmond and Joe Kizzi, who both missed last week's defeat to Bradford with injury, have trained this week and come in to contention for a place in the squad.

Tomorrow's referee is Oliver Langford, whose only previous match in charge of U's was this season's 3-2 defeat at Newport.

Over 400 supporters look set to make the trip north, with supporters reminded that there are no tickets available at the ground on the day - they are available from the Club Shop at Sutton until 1pm on Friday.

Access for all Sutton supporters is via the South Turnstiles in Wetherby Road. A detailed away fans guide for the ground can be found here.

For independent travellers by car: Leave the A1(M) at junction 47 and take the A59 towards Knaresborough. At a roundabout in a couple of miles, ignore the A59 signs and instead take the A658 towards Bradford. At the second roundabout turn right on to the A661. Pass a Sainsburys on the left and the ground is on the right just before the hospital. There is no parking at the ground, but street parking is available around the ground although parking restrictions apply in some cases. You can park for £5 at the Cedar Court Hotel in Park Parade (HG1 5AH) - book your car in, and pay, at reception. Alternatively use town centre car parks and walk to the ground, about 15-20 minutes away.
By rail: There is a direct service to Harrogate from Kings Cross at 09.33, arriving 12.24, and a direct return at 17.36, arriving at King's Cross at 20.31. Otherwise there are a number of options from King's Cross, changing at either York or Leeds, with a total journey time about three hours. It's about a 20 minute walk to the ground, or the bus number 7 from the adjacent bus station offers reduced fares on production of a match ticket. If travelling from Leeds you can also use Hornbeam Park station, about a 25 minute walk from the ground.

Supporters who can't make the trip can listen to an audio commentary on the game through our iFollow service. Anyone who doesn't have a valid monthly or seasonal pass can buy a match pass for £2.50 here. 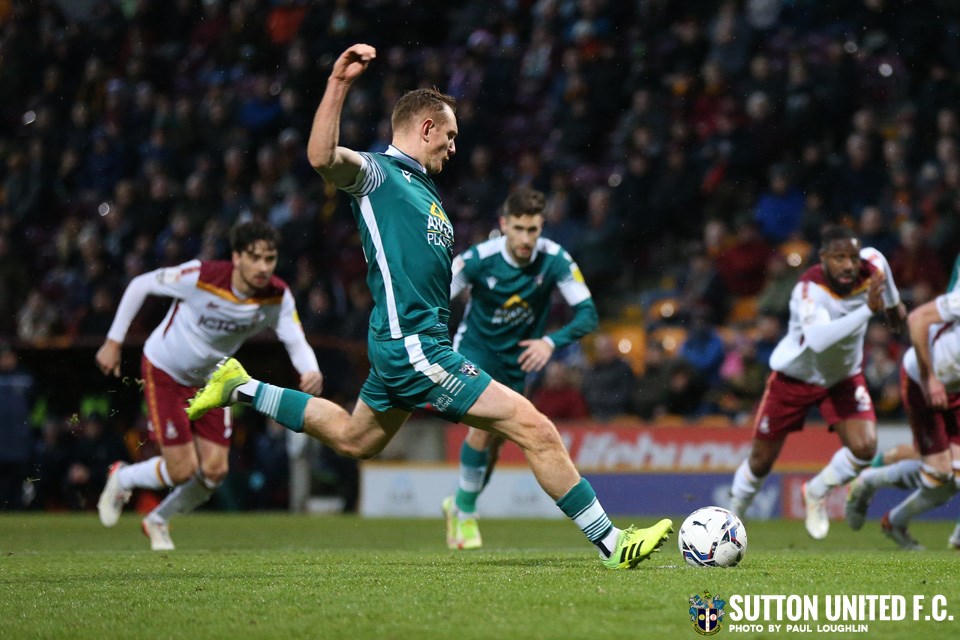 
Please note that there are no admission tickets on sale for Sutton supporters at the ground tomorrow. Tickets must be bought on line before leaving for the game. See below to buy. 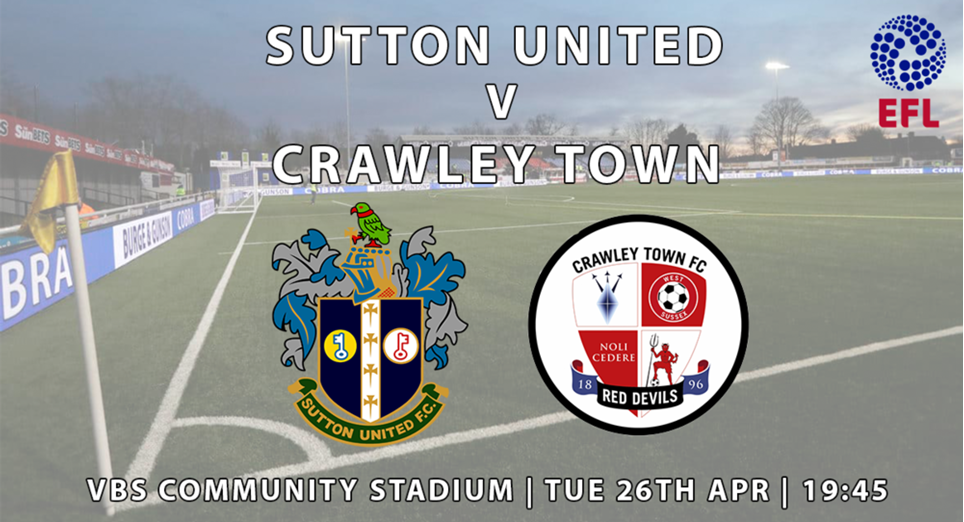 
After Saturday's defeat at Barrow, Sutton return to the VBS Community Stadium for the first of two home games which will go a long way to determining whether U's season will extend in to the Sky Bet... 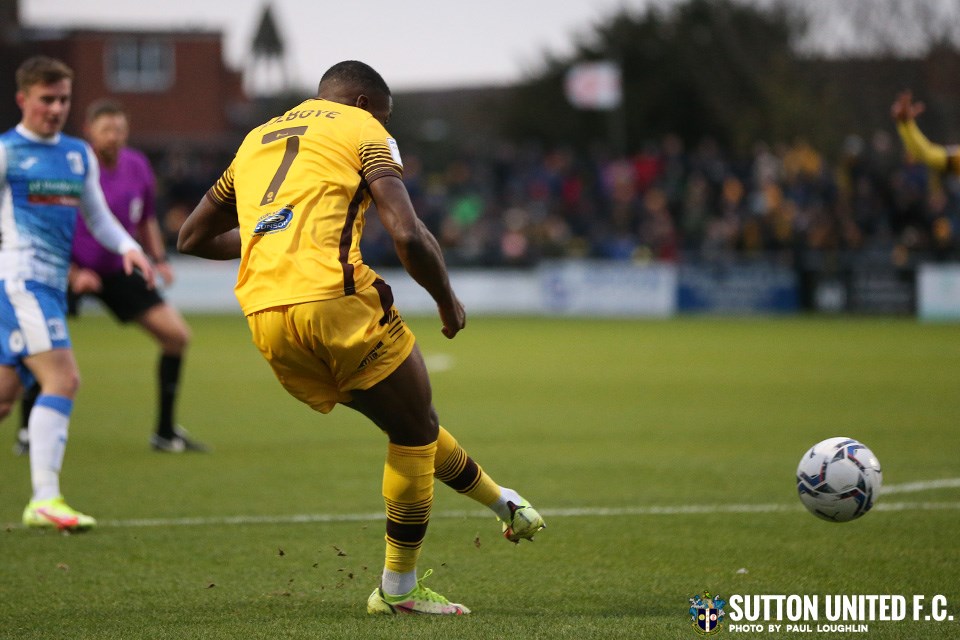 
After taking on and beating two promotion rivals over Easter, Sutton face a side desperate for points for other reasons, making the long trip north to Barrow with the home side potentially one win... 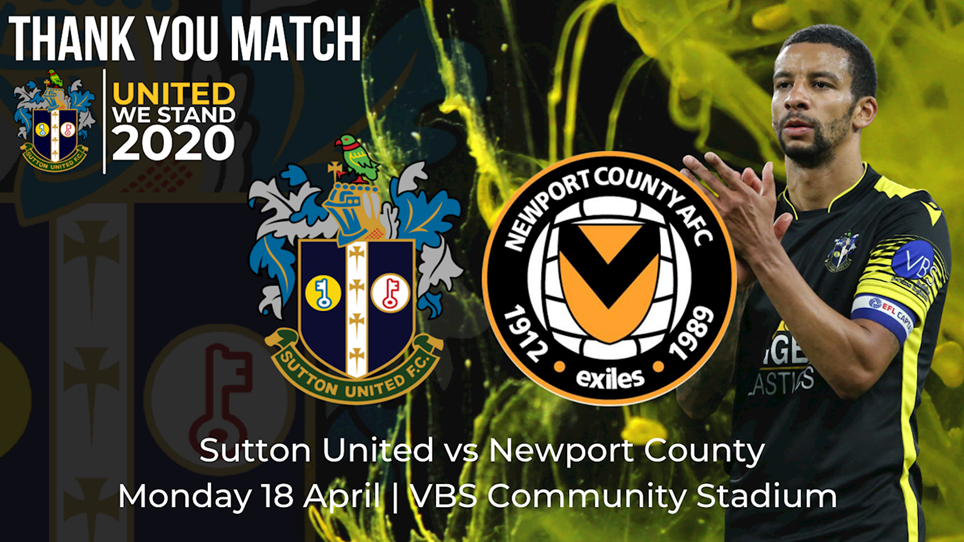 
After Friday's fine win at Mansfield lifted Sutton back in to the Sky Bet League Two play-off places, the side that U's replaced in 7th place, Newport County, provide the opposition at the VBS...